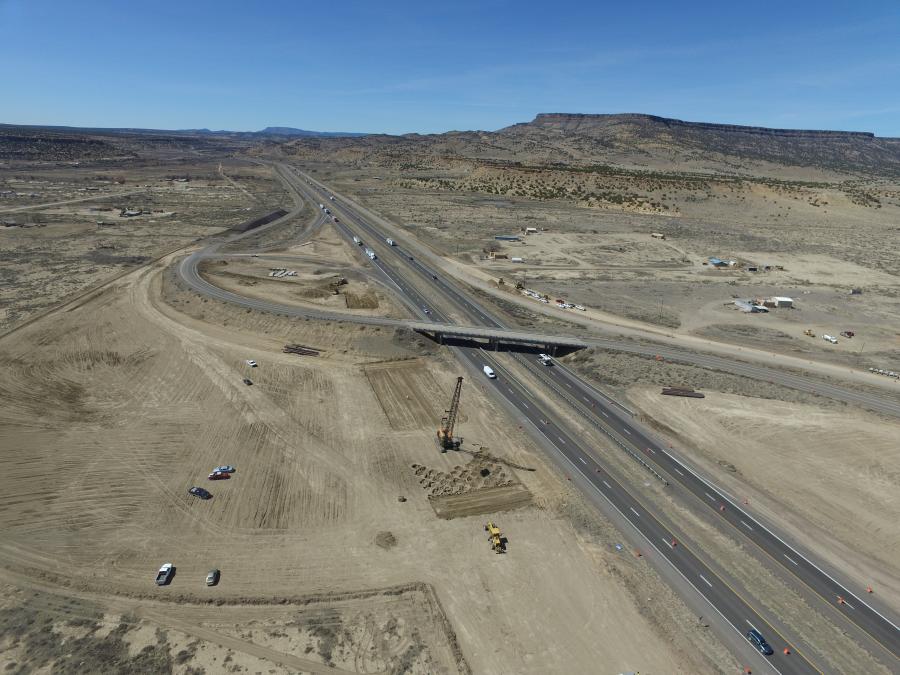 Construction is under way on a $12.5-million bridge replacement project at the Interstate 40 and NM 124 interchange (Exit 96) in McCarty’s, west of Albuquerque, N.M. (NMDOT photo)

Construction is under way on a $12.5-million bridge replacement project at the Interstate 40 and NM 124 interchange (Exit 96) in McCarty's, west of Albuquerque, N.M. The bridge will be built over I-40.

The New Mexico Department of Transportation is overseeing the project, which began on Feb. 23 of this year with the closure of the westbound I-40 on-ramp. Estimated completion date is April 2018.

Funding for the project is from state and federal highway funds.

The original start date for the project was November 2016, but the complexity of the project necessitated adding more time for planning and orchestration.

The project was needed because the bridge was aging and both the on-ramps and off-ramps needed to be lengthened.

The existing four ramps were considered too short according to today's federal standards.

Contractor for the project is AUI Inc. of Albuquerque. AUI is known for constructing major highway, trail and waterline projects.

One of the company's most recent projects is reconstruction of the Catwalk Trail in Catwalk Recreation Area, 5 mi. east of Glenwood, N.M., in the Gila National Forest. The recreation area and trail sustained flood damage in 2013.

Project manager for the I-40 interchange project is Jayson Grover of New Mexico Department of Transportation.

Dirt is being both removed and brought in to help level the project site.

The new McCarty's bridge will be longer and wider than the existing bridge.

The original bridge was constructed in 1967.

In addition to building the new bridge and off-ramps, crews will add acceleration and deceleration lanes for the ramps.

Flood control and drainage also are part of the project.

“Part of the overall improvements to the interchange is to replace or improve the drainage structures within the interchange as needed,” said Lisa Boyd Vega, assistant district engineer, District 6 of NMDOT. “Several structures need to be extended to accommodate the new interchange configuration.”

New median drop inlets are needed to capture low areas formed by the new ramp and roadway alignments. Culverts will be upsized to prevent ponding within the vicinity of the interchange.

The area of the interchange is known to flood with the seasonal monsoons. About $1 million of the project funding has been put toward drainage improvements.

The overall project is currently in Phase 1 of 10 phases.

Ramps will be closed for construction, one at a time, for one-and-a-half to two months.

Boyd Vega said the existing bridge will remain in service while the new bridge is being constructed. The westbound on-ramp will be closed for an extended period of time from Phase 1 to Phase 5.

The other ramps will be closed at different phases during construction. During the closures, traffic will be detoured to I-40 at exit 100.

Exit 96 will be fully closed off at the end of the project.

Efforts have been made to keep roads in the interchange area open for most of the project.