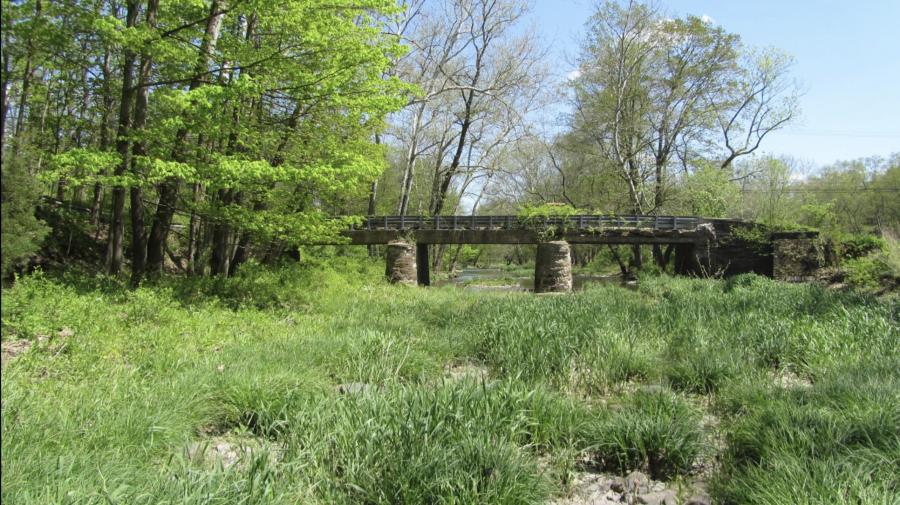 PennDOT has been trying to replace the Headquarters Road Bridge's stone foundation for the last 10 years due to its age — the bridge has been closed since 2011, The Philadelphia Inquirer reported. (PennDOT Photo)

The Delaware Riverkeeper Network, a nonprofit, is suing the state of Pennsylvania and the Federal Highway Administration (FHWA) over the replacement of a historic bridge that has spanned the Tinicum Creek since the War of 1812.

PennDOT has been trying to replace the Headquarters Road Bridge's stone foundation for the last 10 years due to its age — the bridge has been closed since 2011, The Philadelphia Inquirer reported. While the agency came up with a design that echoes the old bridge, the Delaware Riverkeeper Network pushed forward with a federal lawsuit on Oct. 22 to block the project from moving forward.

The nonprofit is challenging a “categorical exclusion” of an environmental impact study that the FHWA gave PennDOT on Sept. 24, The Intelligencer reported. It is now asking the U.S. District Court of Eastern Pennsylvania to halt work on the project until the case has been settled.

For its part, PennDOT had requested that the study be excluded under a portion of the National Environmental Policy Act, which is usually granted to projects that don't have “expected significant environmental impacts,” The Intelligencer reported.

According to the Delaware Riverkeeper Network, PennDOT did not fully look into alternative options when it made the decision to demolish the old bridge and replace it with a new one. In addition, it called PennDOT's request for the exclusion of the impact study “fatally flawed,” the court filing said.

In a statement, the Delaware Riverkeeper Network also said that “the agencies failed to engage in all possible planning to minimize harm to the historic resource, the exceptional value Tinicum Creek, the environment, and downstream property owners,” and that “PennDOT defined the purpose and need of the project so narrowly as to exclude rehabilitation as an option.”

“PennDOT disregarded its maintenance obligations on the Bridge in the hopes that the agency could argue that the Bridge could not be rehabilitated and needed to be replaced,” the lawsuit stated.

The nonprofit suggested a different course of action, which includes a rehabilitation of the old structure and building a temporary bridge that will span 100 ft. over the Tinicum Creek for immediate use, The Intelligencer reported. However, PennDOT has rejected both of these options before, saying that:

According to Brad Rudolph, PennDOT spokesman, the department did receive federal approval of its design and attended 12 public meetings on the structure. In addition, Rudolph said PennDOT looked into 10 different options, including the nonprofit's rehabilitation proposal.

“Due to the existing structure's poor overall condition and the need for a new concrete span that meets current design criteria, PennDOT does not agree that a rehabilitated structure meets the needs of the community … nor would a rehabilitation be a wise investment of taxpayer dollars,” said Rudolph.

PennDOT does plan to demolish the old bridge, however, FHWA has forged an agreement with both the national Advisory Council on Historic Preservation and Pennsylvania's Historic Preservation Officer to ensure the upkeep of specific parts of the bridge's historical importance, including using old stones for the new bridge, The Intelligencer reported.

The rebuild will include moving both the bridge abutments and the creek 15 ft. to the west, which environmental experts argue will cause the erosion of banks further downstream, which, according to a news release from the Delaware Riverkeeper Network, will result in “property loss and in-stream pollution,” The Intelligencer reported.

For members of the Delaware Riverkeeper Network, preserving the old bridge goes beyond environmental and historical considerations.

“This is a land of narrow, winding, country roads and one-lane bridges that are well-suited to the scenic, rural character of the place,” said Mark Stout, transportation planning expert.

“A two-lane bridge here – at the heart of the Ridge Valley Rural Historic District – is both unnecessary and out of place. I'm also concerned that building a two-lane bridge here will cause new safety problems by encouraging higher speeds and more truck traffic in an area where you don't want to see those things.”

According to a 1997 PennDOT historic bridge survey, the old bridge is just one of two surviving pier-to-pier bridges left in the United States; it also was one of just eight working bridges built during or before 1812 in the state.

The bridge was used for pedestrians and horses for just over 100 years before it was opened to cars in 1919, The Philadelphia Inquirer reported.