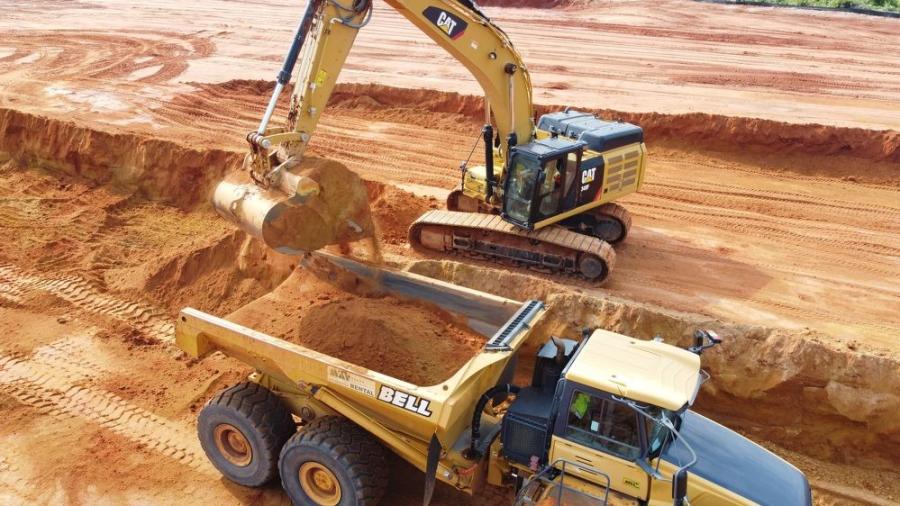 The North Carolina Department of Transportation (NCDOT) is overseeing an $89 million effort to widen 8.2 mi. of U.S. 158 from I-95/N.C. 46 in Roanoke Rapids to St. John Church Road west of Jackson. Most of the current two-lane road will be widened to a four-lane median-divided road. The project also will include a bypass of Garysburg.

"U.S. 158 is a major North Carolina thoroughfare reaching west from Winston-Salem to the Outer Banks on the east coast," said Brooks Braswell, NCDOT resident engineer. "It's the primary east-west route connecting both I-85 and I-95 to the northern coast of North Carolina. Widening this road in strategic areas is expected to help improve the traffic flow and safety of both local and state-wide travelers. This also is an effort to improve access to existing and future businesses along the U.S. 158 corridor in Northampton County." 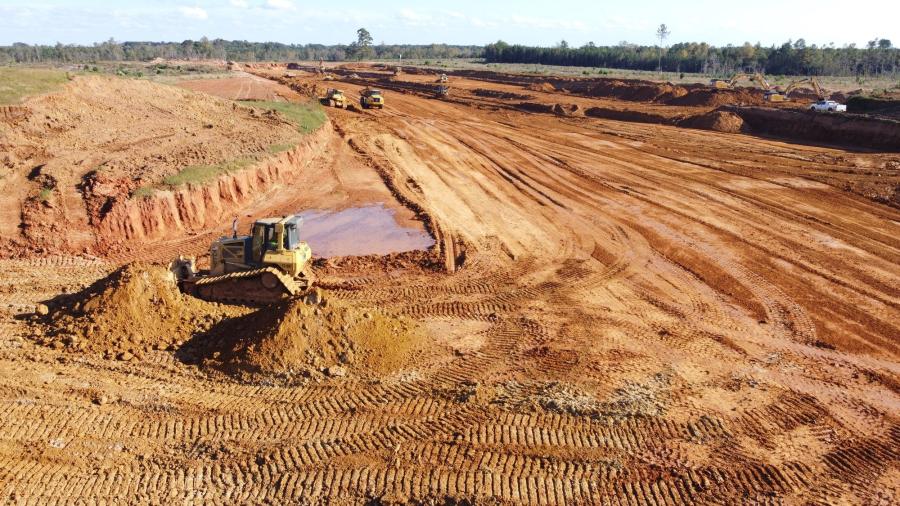 The project involves mostly widening of the existing roadway.

"It will have multiple lane switches as adjacent lanes are built and put in service to upgrade the existing lanes," said Braswell. "Currently, the area motorists are still utilizing the existing lanes throughout the project. Adjacent lanes of travel should be ready for service by late spring/early summer of 2021. Impact to local traffic has been minimal, up to this point.

Thalle Construction Company Inc., a Tully Company, serves as the prime contractor of the project. According to Brian Sharp, Thalle project executive, one of the biggest challenges is the need to identify and obtain rights to excavate borrow soil from adjacent properties.

"With a borrow excavation quantity of more than 3,000,000 cubic yards, this has involved investigation of many properties, agreements with multiple property owners and development of each site. After a year of construction and placement of nearly 1,000,000 cubic yards of material from nearby properties, this is still an ongoing task to identify new sites that will decrease the length of our haul and maximize our efficiency."

"A top concern for any project Thalle performs is the safety of our employees and protection of the public that continue to use the roadways that run through this project. The implementation of flagging operations, placement of traffic control measures and advanced warning signs help alert the public of the active construction site and provide safe guidance through the project."

Thalle has already completed the installation of erosion control measures, clearing and grubbing, a culvert extension, water, sewer and storm drain installation and excavation and placement of a significant amount of borrow soil. 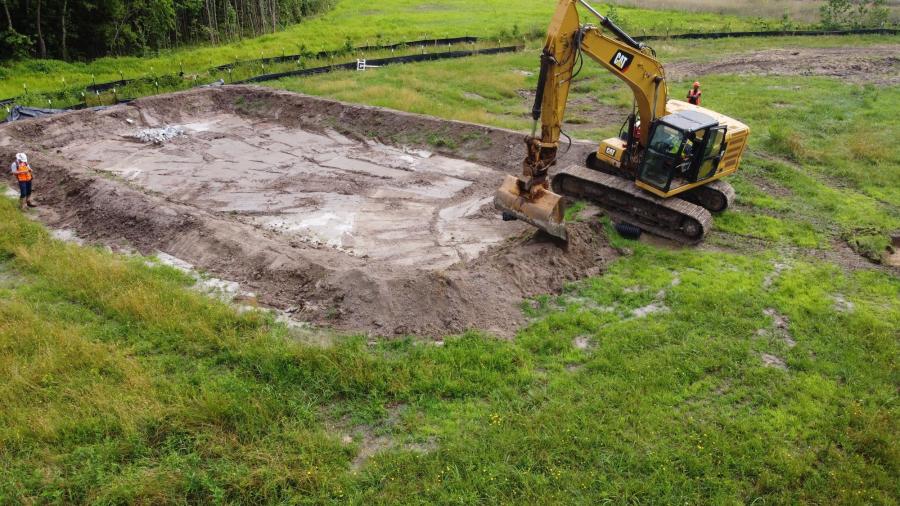 "Right now, we are continuing the excavation and placement of borrow soils, beginning the construction of mechanically stabilized earth walls to support bridge approaches across a railroad, installing storm drain and utilities and stabilizing completed slopes and areas with seeding. The major component of this work is the borrow placement, which is going very well, despite many instances of storm events that prevent work from occurring for several days at a time."

"Thalle has prevented significant impacts to production through daily health and temperature checks, contact tracing and isolation in the event of an exposure and strict procedural enforcement of social distancing, masks, changes to sign-in and meeting protocols and sanitizing tools and equipment," said Sharp.

"The main priority in the first year of this project was to evaluate and secure properties from which borrow excavation could be obtained and place this material in areas that require settlement periods prior to bridge construction. As these occur in a vicinity of the project that contains bridges over two railway alignments, the fills are significant in height and volume. We plan to have these completed this year. Placement of soil will continue as bridge construction occurs and as the fills are placed to grade, stone base and asphalt paving will be performed to complete the roadway."

Battling wet conditions during construction has not been easy for crews.

Said Sharp, "2020 has been an extremely challenging year to perform major earthwork, due to the number of named storms that have dumped excessive rain on the project. This has impacted our ability to excavate, haul and place borrow soils and has impacted the project schedule. The excessive rain saturates the fills, which take time to dry and also remain trapped in the borrow excavations, requiring dewatering effort and drying prior to resuming work.

"Heavy rains from tropical storms and hurricanes typically exceed the design parameters for erosion control measures and, as such, put a massive strain on the stability of the slopes and perimeter erosion control measures resulting in significant efforts to maintain and repair these best management practices. Thalle has combatted this by providing additional equipment resources to the project to increase production when the weather permits." 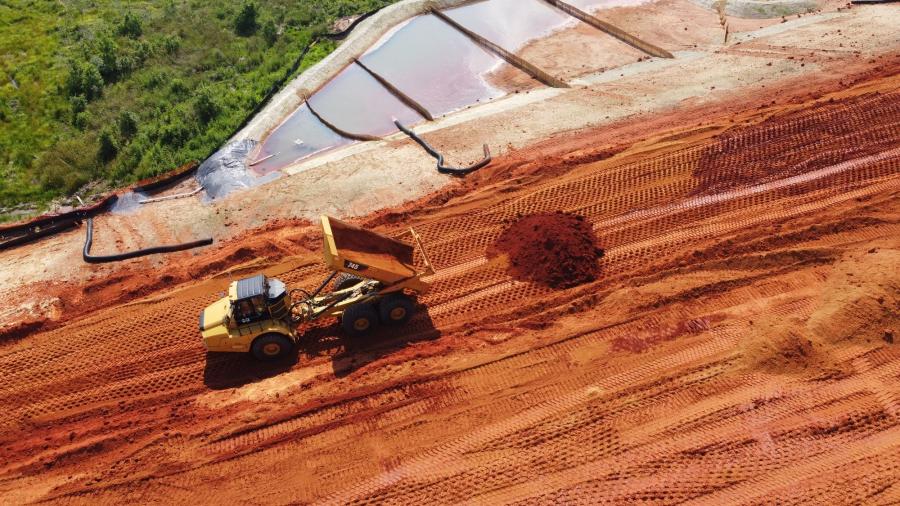 "Currently, this equipment is situated to excavate from two borrow sites with hydraulic excavators loading the articulated haul trucks and to place this material on the new highway alignment. After dumping at the point of placement, the borrow soil is spread in lifts, utilizing the bulldozers and compacted with the rollers. Bulldozers also fine grade side slopes of fills and shape drainage ditches throughout the course of the work. The motor grader maintains haul routes, and the water trucks regularly wet the travel ways to mitigate fugitive dust."

The project is roughly 20 percent complete. The main materials required for the construction are the borrow soils, followed by concrete for structures, aggregate base course and asphalt.

"This project is largely surrounded by existing roadway and farmland that required clearing and grubbing and topsoil to be stripped to begin work," said Sharp. "Demolition of existing structures was required in some areas of the project limits to accommodate the new roadway.

"Excavation is occurring at multiple sites to produce the massive quantity of borrow soil required to construct the fills for the mainline of the new roadway alignments."

The project was selected as a Build NC Bond project. Funding was secured with the initiation of the bond program, which was designed to support the Strategic Transportation Investments Act and deliver needed projects in a timely manner. Work began in September 2019, with a tentative completion date of March 2024.

Braswell added, "The project has been very rewarding to watch as it takes shape. There has been a massive amount of work that has taken place to get the project to where it currently is." CEG