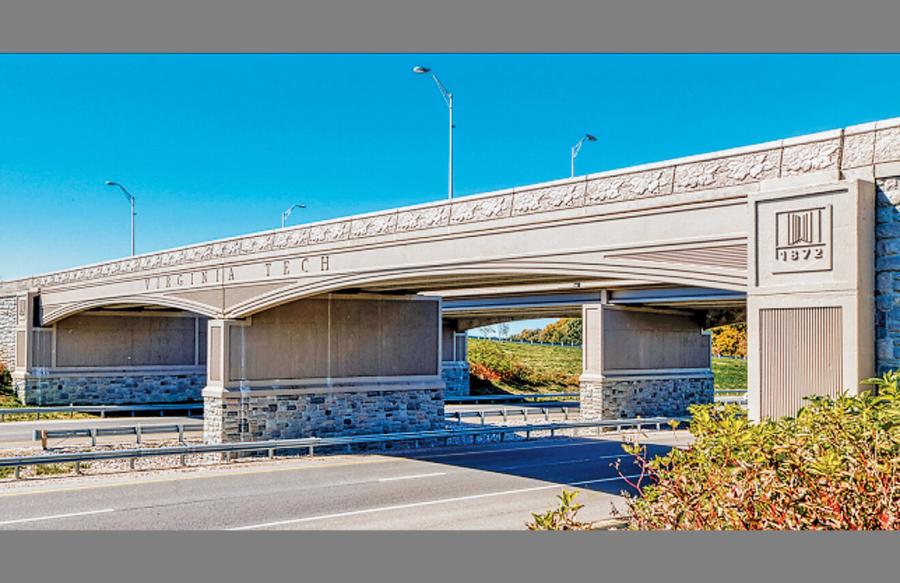 The Great Falls Citizens Association is asking state transportation officials to consider an aesthetically pleasing "signature bridge" design, such as that used by the Virginia Tech Southgate Bridge pictured here, for the Georgetown Pike replacement span that will be installed during the 495 NEXT Project.

Virginia Gov. Glenn Youngkin, along with Virginia Department of Transportation (VDOT) officials and other dignitaries, broke ground in mid-March for the 495 Express Lanes Northern Extension project, which will add two high-occupancy-toll lanes in each direction on 2.5 mi. of the Beltway between the Dulles Toll Road and George Washington Memorial Parkway.

The privately financed $660 million effort will be built by Australia-based Transurban. Officials hope the new lanes will be ready for use in 2025.

But when the construction dust settles, the orange cones are gone and work crews have moved on to projects elsewhere in northern Virginia after completion of the large road project, the Great Falls Citizens Association (GFCA) hopes an aesthetically pleasing new bridge will take the historic Georgetown Pike (VA Highway 193) over the Capital Beltway in McLean, according to a report by the Sun Gazette, an online news source that covers several northern Virginia communities.

In a recent letter to VDOT Secretary W. Sheppard Miller III, GFCA president William Canis laid out the case for using a "signature" design for the Georgetown Pike replacement bridge and asked that his group have the chance to work with the design/build contractor on the span's overall look.

While in the past, transportation agencies designed highways and their related infrastructure with the idea of moving vehicles efficiently, Canis wrote that the Federal Highway Administration (FHA) and state transportation departments in recent decades have focused on "context-sensitive" designs that also "reflect the values, culture and history of the communities they pass through."

He added this design method "results in built projects that give as much consideration to community needs and values as they do to commuter needs."

Canis also pointed out that Maryland, Ohio, Oklahoma and Texas have active aesthetic programs for bridges.

The Sun Gazette reported earlier in April that VDOT has built "signature" bridges before, including a span near Virginia Tech in Blacksburg that in 2019 received the Engineering Excellence Award from the American Council of Engineering Companies.

The state agency now is using a "utilitarian but unattractive," standard interstate-overpass design for the Georgetown Pike span, Canis noted. Building a signature bridge instead would add no more than 2 percent to the project's cost, and "possibly" maybe not even that much if addressed early enough in the process, he wrote.

Georgetown Pike (VA 193) runs 11.7 mi. from VA 7 in Dranesville east-southeast to VA 123 in Langley. Along the way, the highway passes through Great Falls and meets I-495 in McLean, west of Washington, D.C.

In his letter to VDOT's Miller, Canis also highlighted Georgetown Pike's rich history, including that it had started as a trail carved out by grazing bison herds centuries ago before serving as a trade route for the Susquehannock and Iroquois Indians in the 1600s. Later, farmers in Virginia's Piedmont and Shenandoah areas used the trail extensively by the late 1700s.

In the early part of the 19th century, the route was improved and run as a toll road by the Georgetown and Leesburg Pike Co., after that outfit received a charter from the U.S. Congress in 1813.

One hundred and twenty-one years later, it was purchased by Madeira School founder Lucy Madeira Wing, who transferred ownership to the commonwealth of Virginia, which then added the roadway to the state's highway system.

In 1973, the roadway was chosen as Virginia's first Scenic and Historic Byway. The next year, Georgetown Pike was added to the National Register of Historic Places by the National Park Service.

"Importantly, this [proposed] overpass may be the first practical one to welcome people crossing into Virginia from Maryland with an impactful design highlighting the history and beauty of our state," Canis wrote.