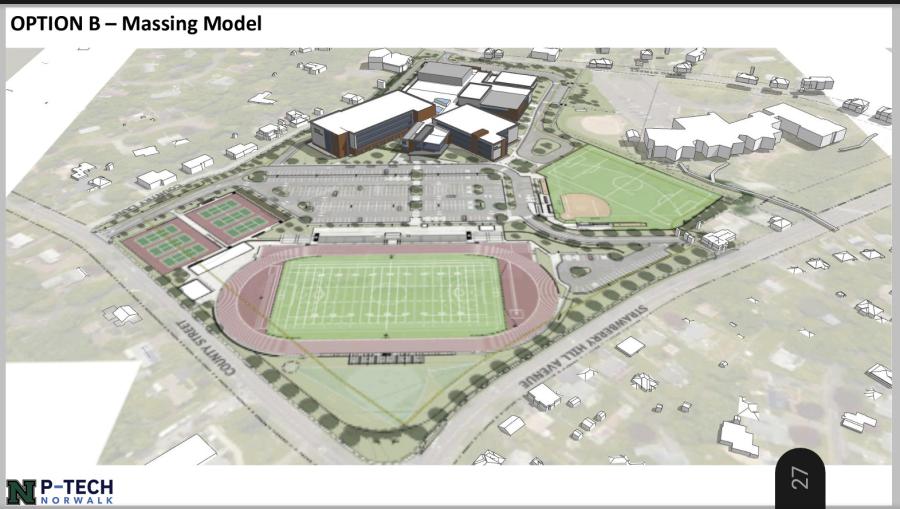 The school board voted 7-2 to adopt Option B, the construction plan recommended by the city’s building management department.

The board of education (BOE) in Norwalk, Conn., on March 15 voted in favor of building a new Norwalk High School on the existing football field.

The school board voted 7-2 to adopt Option B, the construction plan recommended by the city's building management department.

Board member Erica DePalma told the New Haven Register that the BOE was not deciding whether construction of the building moves forward, but only giving its preference for how the project is designed if Norwalk decides to move forward on the new school.

The BOE facilities committee met in February to discuss two options on the table and chose to defer a final decision to the full board. Norwalk BOE Chair Colin Hosten said during March 15's meeting that members of the committee wanted the extra two weeks to clarify questions raised through public feedback.

A presentation of the new school project clarified that the total cost for either option would be $225 million. This would include the costs of rebuilding athletic facilities displaced during the construction of the new high school, and the cost of building an indoor pool.

The Register reported that Option B would produce a 330,000-sq.-ft. building to be completed in two phases, spanning about 50 months. The actual school building would be finished in three years, with construction projected to start in December 2023. The athletic facilities would be completed in the two years after the school is built.

Option A would have built the new high school in five phases over 55 months on the footprint of the existing structure at an estimated cost of $225 million.

The Norwalk Common Council approved a little over $50 million for the project in 2020 to cover costs not reimbursed.

Alan Lo, the city's building and facilities manager, told the BOE that Norwalk needs to go back to the state to bring the total package up to $225 million, which was the original request in 2020, because construction costs continue to rise. He said the usual increase per year for building projects is 3 percent; however, it is now at 5 percent.