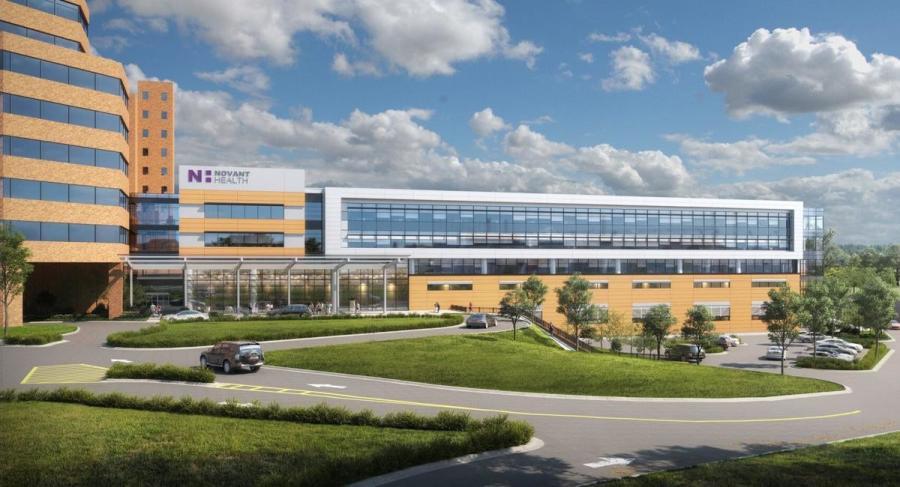 Novant Health Inc. said Feb. 25 that it will spend $222 million to build a critical-care tower at Forsyth Medical Center.

The tower is the largest investment by Novant for its main Triad hospital and is the second phase of an overall $403.4 million project at the Winston-Salem, N.C., hospital.

The tower will be built on the site of the hospital's Rehabilitation Center, which will be demolished. The new facility will have 60 critical-care and 36 intermediate beds, along with an enhanced surgical suite and collocated supportive services.

When the project is completed, Forsyth Medical Center will continue to have 921 beds because the hospital "is replacing and reallocating" those beds with the project.

In addition, Phase Two will include expanded pre- and post-operative space, and more natural light in the overall facility.

"From robotic-assisted surgery to developmental therapeutics, the clinical team has built a foundation of excellence that will finally have a physical space to match," Lari Harding, chair of Novant's Triad Region board of trustees, said in a statement. "Once complete, the critical care tower will combine medical expertise and an optimally designed space that prioritizes patient experience and healing."

The latest Forsyth hospital project comes on the heels of a $181.4 million multi-phased investment pledged in April 2019 to upgrade several facilities, some of which still are under construction.

Phase One has focused on sustainability infrastructure, the renovation of patient rooms and the enhancement of the women's and children's center. There also are plans to expand capacity in areas such as neurology and stroke care, heart and vascular, and oncology.

When Phase One is done, 25 percent of patient rooms will be new or renovated. Existing rooms will be upgraded with attention paid to lighting, paint and noise mitigation on nursing units.

The two projects are the first significant upgrade since Forsyth opened its North Tower in 2007.

"Our goal, then and now, is to invest in our community and to provide world-class care in Winston-Salem," Chad Setliff, president of Novant's greater Winston-Salem market, explained in a statement. "In spite of the challenges brought on by COVID-19, we're fulfilling our commitment with an additional investment of $222 million."

The renovations to Forsyth come on the heels of Novant announcing Feb. 16 that it is requesting state regulatory permission for a $50 million infrastructure expansion at the Kernersville Medical Center, on the east side of Forsyth County.

The focal point of that proposed 60,000-sq.-ft. expansion is adding a fourth floor to the 10-year-old hospital with a new maternity and delivery center as the primary usage. There would be 13 medical beds transferred from Forsyth facilities to the Kernersville hospital for a total of 63.

The expansion would bring the square footage of the $100 million Kernersville hospital to 281,786 sq. ft.

Novant also would transfer an underutilized catheterization lab from Forsyth, the first at the Kernersville hospital. The lab will be placed in open space on the second floor. The goal is to have the catheterization lab and the fourth floor/maternity services opening by 2024.

On Feb. 1, Novant completed a $5.3 billion acquisition of New Hanover Regional Medical Center in the seaport city of Wilmington, establishing a third major operational hub in North Carolina after Winston-Salem and Charlotte.

The health system has become southeastern North Carolina's dominant health-care provider. Besides its operation of Brunswick Medical Center in the town of Bolivia, across the Cape Fear River from Wilmington, there are plans to build a $210 million, 66-bed community hospital in the Scotts Hill community near the Pender County line.

In the Charlotte market, Novant announced plans Oct. 13 for a $166 million, seven-story building that combines all outpatient cardiac and cancer specialists, treatment services and support programs into one location.