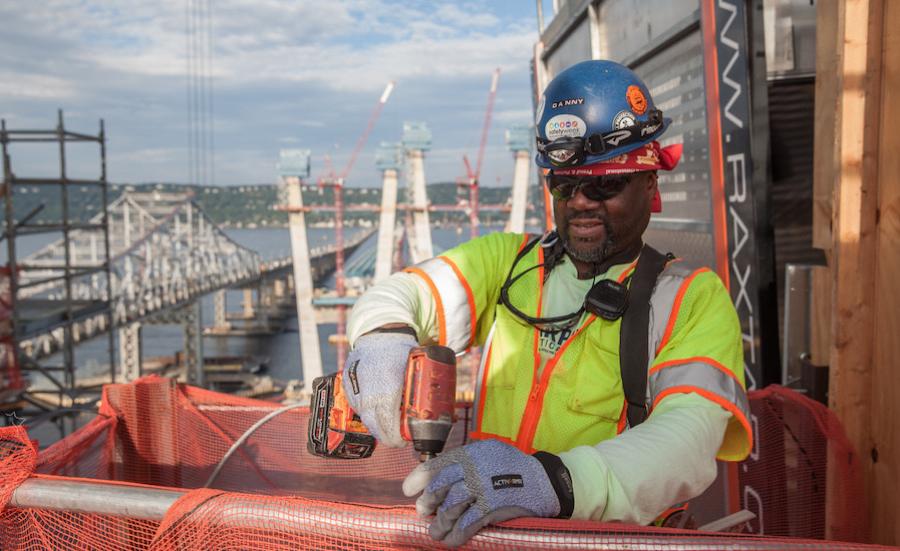 A top official with the New York State Thruway Authority (NYSTA) rejected most of the $960 million in claims from the builders of the Gov. Mario M. Cuomo Bridge on July 7.

The NYSTA agreed instead to pay only $28 million for a piece of the dispute that had already been resolved, along with a handful of other small costs.

Thruway Project Director Jamey Barbas notified Tappan Zee Constructors (TZC) of her determination, marking the latest step in a bitter back-and-forth battle between the NYSTA and the consortium of heavy construction companies that built the massive $4 billion, 3.1-mi. span to replace the Tappan Zee Bridge over the Hudson River.

TZC has said that the $960 million is the result of cost overruns associated with the bridge project, arguing in part that Thruway-mandated changes to the bridge design — along with a crane collapse, winter weather and a tugboat crash that were out of the contractors' control — forced the company to accelerate its work and increase its costs.

But Barbas countered, in an interview July 7 with USA Today Network New York, that her office determined that the vast majority of the contractors' claims were without merit, arguing the NYSTA stuck to the project contract and did not force the builders to speed up their work.

"We didn't interfere. We did our job, which is oversight," said Barbas, who also serves as the Cuomo Bridge's project director. "We didn't go outside the bounds of what the contract allows us to do in terms of our quality oversight."

The NYSTA has provided the introduction and summary of Barbas' decision but declined to present the full document as it underwent a legal review, USA Today New York reported.

The Gov. Mario M. Cuomo Bridge, a spectacular twin span that connects Rockland and Westchester counties 20 mi. north of New York City, marked one of the biggest infrastructure projects in the country when it first opened to traffic in 2017.

The building project has been seen as a major legacy builder for current Gov. Andrew Cuomo, who made replacing the aging Tappan Zee Bridge a key push in his first and second terms in office. He also led the push to name the new bridge after his late father.

TZC, the consortium made up of Fluor Enterprises Inc., American Bridge Company, Granite Construction Northeast Inc. and Traylor Bros. Inc., has filed more than 15 major disputes with the NYSTA since 2018 seeking the additional cost payments.

Barbas' ruling denied all but five of those claims outright. Of those she did grant, the financial cost was limited primarily to $28 million the NYSTA had already agreed to pay after an initial plan for disposing of dredged material fell through.

She found most of TZC's claims were "properly denied for lack of substantive merit, failure in many cases to comply with notice and other requirements of the contract and failure to demonstrate causation of properly calculated and supported damages."

Should Barbas' determination hold, the NYSTA said the Cuomo Bridge would remain within its $4 billion budget, adding that any substantial increase to that cost could force the need to seek additional revenue, probably through toll hikes.

But TZC can appeal Barbas' decision to upper levels of the Thruway Authority and has already filed one lawsuit earlier this year over the cost dispute, which remains pending in the New York State Court of Claims.

Shortly after Barbas' announcement, TZC issued a statement saying the building consortium was "heartened" that the Thruway Authority had finally responded to its cost claims.

"This hopefully represents NYSTA's first step in meaningfully joining our good faith efforts to resolve this dispute according to the procedures outlined in our contract," the press release read. "TZC remains focused on reaching a fair and swift resolution of the outstanding payment matters with [the Thruway Authority], rather than continuing to draw out the claims process, which places an untenable cost burden on our companies and, ultimately, New York taxpayers."

Gov. Andrew Cuomo has often touted the $4 billion bridge as being a project that was constructed on time and on budget.

To keep costs down on the five-year project, the NYSTA utilized a design-build model, a first for major construction projects in New York. The idea was to prevent cost overruns while keeping to a strict timeline, with fines levied for missed deadlines.

However, TZC claims the NYSTA repeatedly undermined the design-build method. Central to the consortium's claims is what it calls the Thruway Authority's repeated meddling in plans for six overlooks, or belvederes, that offer sweeping views of the Hudson River along the bridge's 3.6-mi. biking and walking path.

Initial plans called for stainless-steel overlooks with protective mesh netting at a cost of $2.45 million, according to documents reviewed by The Journal News, a Lower Hudson Valley newspaper that is part of the USA Today Network.

But the total surged to $64 million after the NYSTA demanded glass-walled belvederes capable of withstanding a ballistic missile attack, built high enough so people would not be able to jump over.

Last winter, Barbas defended the upgraded belvederes as a necessary safety measure. She also cast the disputes with TZC as the Thruway Authority's attempt to make sure the work was being done correctly.

In her recent determination, she declined to approve additional compensation for the belvederes, noting that TZC had previously agreed to waive any claim to any time impact because the builders would no longer have to install a horizontal netting underneath.

2016 Tugboat Cleanup Could Lead to Payment

According to documents USA Today Network New York recently obtained from the NYSTA after a Freedom of Information request, the dispute between the warring sides did not end with belvederes.

They reveal years-long disputes following a pair of 2016 mishaps caused work on the bridge to be delayed: the collapse of a massive crane that sent a 250-ft. boom crashing onto the travel lanes of the old Tappan Zee Bridge, and a tugboat crash that killed three people.

In both instances, TZC asked for the project's timeline to be extended, contending it was not responsible for the accidents.

The March 2016 Hudson River incident involved an 84-ft. tugboat crashing into a construction barge while transporting a barge from Albany to New Jersey, resulting in the deaths of three members of the tug's crew.

It took 12 days to recover the vessel and the body of one crew member after it sunk to the floor of the river, leaking some 5,000 gal. of oil.

TZC deployed a floating boom to contain the leakage, but when the consortium asked for a 198-day extension of time, saying its work on the bridge's towers was delayed, the NYSTA refused to budge, the documents show.

In her July 7 ruling, Barbas suggested the Thruway Authority would consider covering the costs of containing and removing the oil associated with the tugboat crash from five years earlier but declined to provide any compensatory time extension.

She wrote that she "will consider, for possible compensation, documentation of costs recoverable under the terms of the contract that are directly attributable to containment and removal of hazardous material on account of the tugboat incident."

TZC was given 30 days to detail its costs for the oil removal before a determination is made, according to the summary of Barbas' decision.

As far as the crane collapse in 2016, she declined TZC's claim outright.