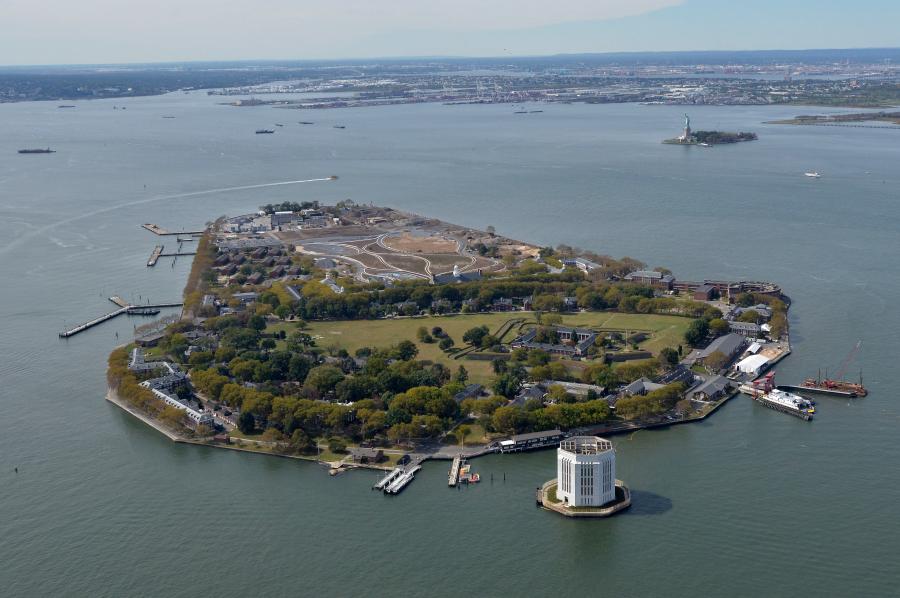 An aerial view of Governors Island, with the historic district in the foreground and new park and public spaces beyond. (Governor’s Island/Carlo Buscemi Imagery photo)

The de Blasio Administration officially initiated the public review process for a rezoning of the southern half of Governors Island. This effort has the potential to unlock up to 4.5 million sq. ft. of commercial, academic, cultural and institutional development that would complement and financially sustain the Island's popular park, public programming and cultural amenities. This rezoning will draw on the city's work to repurpose historic buildings with a focus on new development areas to support the job producing industries that represent the future of the city.

“Governors Island's 43-acre park has made it the jewel of New York Harbor,” said de Blasio. “The Island is now set to dramatically expand its role in our city's economy as we turn its southern half into a center of innovation and education.”

“Thanks to almost a decade's worth of substantial city and philanthropic investment, Governors Island is already a destination for recreation, relaxation and culture for nearly a million visitors annually. This rezoning represents the next step in marrying the Island's rich history with its future role as a global hub for convening, the arts, tech, and education," said Alicia Glen, deputy mayor of housing and economic development.

The proposed rezoning covers 33 acres on the southern half of Governors Island, across two zones previously established for new development as part of a 2010 Park and Public Space Master Plan. The sites include a 7-acre parcel on the western side of the Island with sweeping views of the Statue of Liberty and an expansive 26-acre parcel on the Island's eastern shore that together have 4.5 million sq. ft. of development potential.

The process outlined paves the way for new development to be integrated into the southern half of Governors Island that is targeted to support the city's efforts to further diversify its growing economy. Each development has the potential to allow unique and flexible floorplates to support new industries that represent the city's future, such as life sciences, media and technology companies. New structures will be predominantly low and mid-rise.

While a federal deed restriction established as part of the 2003 transfer of the Island to New York precludes any full-time residential uses on the Island, this plan will make way for more academic and institutional uses that will complement the Island's existing character as a popular recreational and cultural destination. All revenue streams from future development will support park operations, maintenance and expanded access to the Island's open spaces.

Governors Island has grown in popularity among New Yorkers, with a 65 percent increase in visitorship since 2014. Since the new park was completed in 2016, the Island has expanded from a four-month season to a six-month season, and late nights on Friday and Saturdays were introduced this year. With more than 50 historic buildings on the northern section of Governors Island, the Island currently is home to two year-round tenants: the New York Harbor School and the Lower Manhattan Cultural Council's Art Center. Several new tenants also are preparing to move into buildings on the Island year-round, including Spaceworks and the Billion Oyster Project.

With input from Manhattan Community Board 1 and the Governors Island Community Advisory Committee, guiding principles for future development were established:

“This is a great project with important goals, and it's another exciting step on the road toward making Governors Island accessible to the public year-round,” said Manhattan Borough President Gale A. Brewer. “Projects like this one are worth getting right, with a thorough process that takes everything and everyone into account. All New Yorkers interested in the future of Governor's Island should follow this process, come to the hearing, and offer their ideas.”

“This announcement represents an opportunity to unlock the full potential of an urban oasis that is quickly becoming an indispensable resource for a growing number of New Yorkers,” said Council Member Margaret S. Chin. “I look forward to working with the community board and others throughout Lower Manhattan to ensure that every opportunity is explored and that all concerns are heard throughout this process. Together, I believe we can create a Governors Island with even more cultural and educational activities, idyllic park spaces and playgrounds for all to experience and enjoy.”

“Governors Island is a rare and precious resource for the entire city and region that inspires creativity and innovation,” said Michael Samuelian, president of the Trust for Governors Island. “This next chapter presents an unparalleled opportunity to activate the Island with new educational and research facilities in a destination unlike anywhere else. We look forward to continuing our transformation with a collaborative planning process that will help ensure that this extraordinary open space is accessible and sustainable not just today, but for generations to come.”

“Manhattan Community Board 1 has long supported the work of the Trust and our mutual goal to unleash the potential of Governors Island. Offering a unique combination of more open space along with economic and cultural drivers, all New York will benefit from this development. We look forward to working with the Trust to maximize the uses and benefits,” said Anthony Notaro Jr., chair, Manhattan Community Board 1.