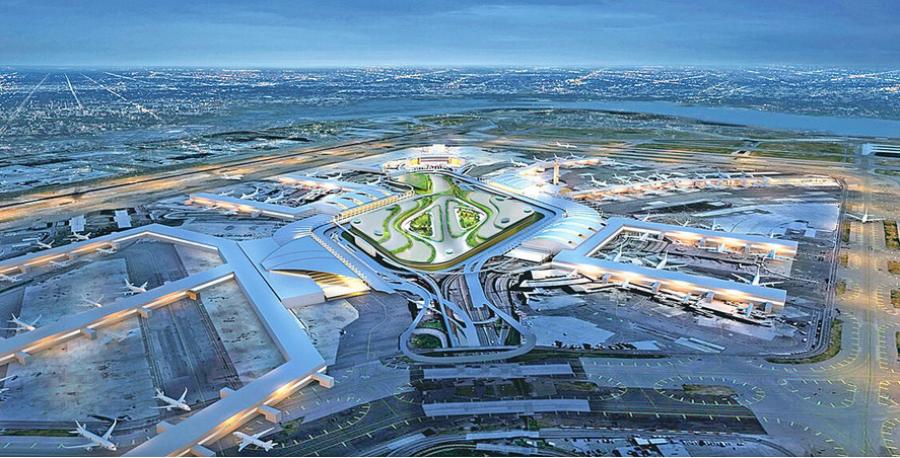 A rendering of the proposed JFK redevelopment plan shows the new terminal construction that is expected to generate billions of private investment in the airport.

De Blasio signed the executive actions to extend the lease from 2050 to 2060 without having to apply through the Uniform Land Use Review Procedure. (ULURP).

The mayor worked with New York Congressman Gregory Meeks, representing Queens and Nassau County (home to the airport), along with Queens Borough President Donovan Richards, on the effort. Together, they built on the work of the JFK Redevelopment Community Advisory Council appointed in October 2018 to secure the community benefits package and a commitment that the Port Authority will require the projects be subject to Project Labor Agreements.

The Port Authority has said that it would not be possible to attract those billions of dollars of private investment unless the investors have sufficient time after the new airport facilities open to recoup their contributions. The old lease term with the city at JFK did not permit this, it said.

"The emergency extension of the airport lease provides the Port Authority the flexibility to restructure the deal terms with the private partners on an urgent basis and, if successful, achieve closing and the start of construction in the second half of this year," a spokesperson of the PA said.

The various agreements include hiring people of color for at least 30 percent of construction jobs, ensuring at least 30 percent of the contractors are minority- and women-owned businesses, as well as 7 percent female hires across all construction trades. In addition, the deal means the establishment of new apprenticeship and scholarship programs within the area and requiring the new building to meet environmental standards.

"Getting this right meant driving a hard bargain and making sure that the needs of the people came first — public benefits front and center," de Blasio explained during his Feb. 22 press event.

The agreement also requires "best efforts" practices to hire from ZIP codes around the airport, followed by all of Queens, fund new pre-apprenticeship programs prioritizing area residents, expand the Council for Airport Opportunity into downtown Jamaica and Far Rockaway to facilitate long-term local hiring, and a commitment to fund an Office of Second Chance Employment to connect formerly incarcerated residents with jobs at the airport.

"Today's lease extension announcement will allow for deal restructuring, which will ensure the long-term sustainability of JFK's redevelopment and allow us, on the federal level, to continue our work to address

the Port Authority's $3 billion shortfall with the Biden Administration in the upcoming COVID-19 relief bill, a real threat to job growth in New York," said Meeks.

In September, the JFK Airport Committee, a community group, said the benefits it wants are health studies, including those related to air quality and the noise under the flight paths. Though there was an environmental review done for the JFK Redevelopment Program, which included multiple opportunities for public engagement, the PA did not conduct any additional studies following the group's request.

The environmental standards that will be applied to the redevelopment program involve practices like minimum LEED Silver and low-emissions service equipment.