The New York City Police Department (NYPD) destroyed dozens of illegal motorcycles and ATVs in Brooklyn on June 21 as it announced a new zero-tolerance policy concerning the vehicles that roar through the nation's largest city.

The ear-splitting, booming engines of motorcycle packs racing through the streets have been a thorn in the side of New Yorkers for years. However, noise pollution is not the only issue with these vehicles, amNY.com noted.

Mayor Eric Adams, Police Commissioner Keechant Sewell, and fellow police officials called them a danger to pedestrians and other drivers.

Standing inside Erie Base and Auto Pound, located at 700 Columbia St. in Brooklyn, the mayor surveyed a sea of confiscated motorcycles and praised the NYPD for the large seizure of the vehicles since the beginning of 2022.

Adams also declared a war on dirt bikes roaring through the city's five boroughs over the summer, promising that their presence will not be tolerated either.

To underscore the new directives, Adams staged a spectacle for the media where he used a checkered flag to signal a bulldozer operator. With that, the Cat D9H crawler dozer careened forward and flattened a huge pile of the seized vehicles under its weight. The action crushed the motorbikes, motorcycles and ATVs beyond repair and sent pieces of debris flying.

"I stated on the campaign trail that we were going to focus on these dirt bikes and ATVs," Adams said at the impound lot, with the backdrop of lower Manhattan behind him. "They are not only a nuisance and an annoyance to us, but extremely dangerous. We see them all the time, and we hear them at all times [of the] night. So today, as we stand in the shadow of the Freedom Tower, we are freeing ourselves from these destructive pieces of machinery that are on our streets [by crushing them] today."

Prior to the Cat dozer's ravaging a lineup of about 100 motorcycles, amNY.com said that Sewell joined in taking a victory lap due to the number of illegal vehicles his officers have removed from the streets.

In his remarks, the police commissioner said that since January, the NYPD has seized more than 2,000 motorbikes citywide — approximately 80 percent more than it confiscated by this time last year.

But amNY.com reported June 22 that, according to Chief of Patrol Jeffrey Maddrey, the NYPD is putting limits on just how far it will go to apprehend reckless motorbikes racers. While he refused to go into detail about how the bikes are taken, Maddrey did say officers will not give chase to active bike riders out of fear for the public's safety. 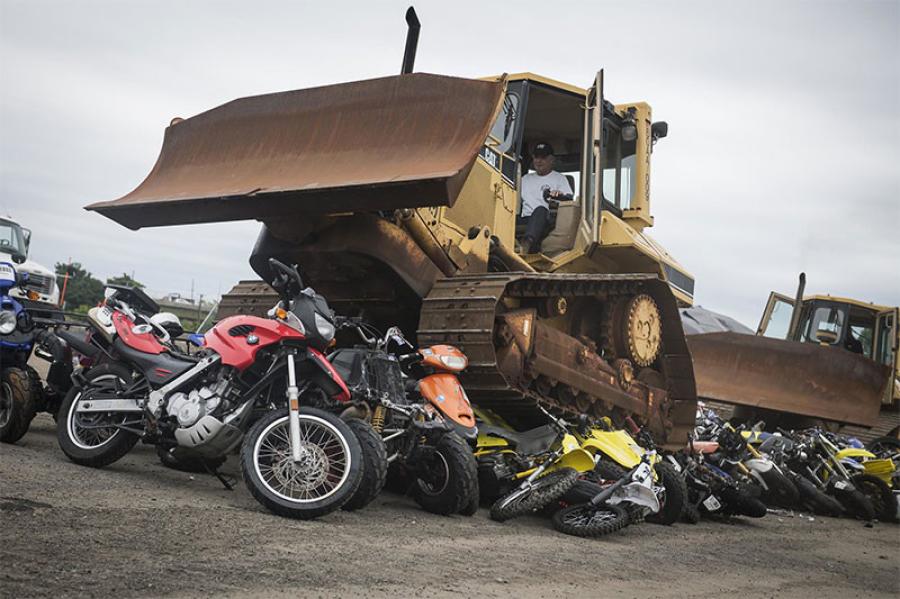