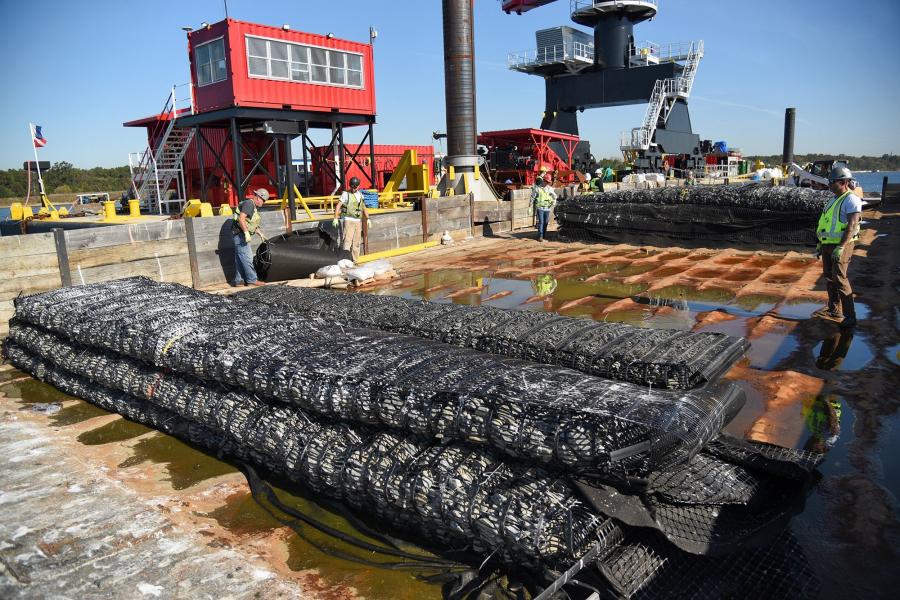 A smaller barge holds stone filled marine mattresses, which are lowered one at a time to the bottom of Raritan Bay. Each mattress is 22 ft. long. (Nathan Kensinger, WNYC/Gothamist photo)

On the southern tip of Staten Island, New York City's latest project to address climate change is now slowly rising from the sea.

In September, the Governor's Office of Storm Recovery announced that crews had started work on the Living Breakwaters, a series of eight enormous rock piles that are being installed off the coast of Staten Island's Tottenville neighborhood.

When the $107 million project is complete in 2024, it will stretch along a mile of shoreline, blunting the impacts of waves, erosion, storm surges and sea level rise — while also providing an important habitat for marine species.

The news website Gothamist reported that from a 250-ft.-long barge moored in the shallows of Raritan Bay, workers are slowly and methodically placing more than 1,100 stone-filled mattresses into the water, creating a foundation for the first two breakwaters. Each 22-ft.-long marine mattress, held together by a geosynthetic mesh and weighing about 7 tons, is gently lowered into the bay by an equilibrium crane and guided into place by underwater divers.

"They get installed in kind of a jigsaw puzzle, [or] Tetris formation, where they are all side-by-side, up against each other," explained Kevin Robinson, project manager of Weeks Marine, the Cranford, N.J.-based construction and dredging contractor performing the work.

"That provides scour protection and a structural foundation for the stone, so it doesn't settle into the bay and collapse over time."

The New York landscape architecture studio SCAPE designed Living Breakwaters after winning funds from the Rebuild by Design competition, an initiative created by the U.S. Department of Housing and Urban Development in the aftermath of Hurricane Sandy. SCAPE also is coordinating the entire construction process.

The breakwaters under construction will include hundreds of specially designed concrete features that mimic tide pools and marine habitats, Gothamist reported. The four largest of the structures also will create reef ridges extending into the bay, providing shelter for fish and other marine life, including an oyster colony installed by the Billion Oyster Project, an initiative dedicated to restoring those habitats to New York Harbor.

The last step in the breakwaters project will be a beach replenishment, spreading 21,000 tons of newly dredged sand across the Tottenville shoreline.

Damaged Beachfront in Need of Rehab

Tottenville's coastal area is in dire need of protection as it has become badly eroded over the last few decades, and waves now crash just a few feet away from the lawns of waterfront homes.

The neighborhood was inundated by the hurricane's storm surge, which destroyed homes, cars and businesses.

After Sandy crashed along the coast in 2012, a barrier of sand filled TrapBags was installed. Since then, however, hundreds have split open, emptying their contents back onto the ocean. Where this barrier ends, homes are protected by little more than loose piles of rubble.

"There were a number of houses that were just obliterated [by the hurricane]. The first line of houses was the wave break," said Pippa Brashear, the planning principal at SCAPE, and project manager for the Living Breakwaters. "The aim here is to take that offshore. The breakwaters are designed to be high enough, but also strong enough, that those big waves are breaking out there on the breakwaters, and not reaching shore."

Beginning in January, the breakwaters will start to emerge from the water, she told Gothamist, as workers place larger stones onto the completed mattress layers. These materials are being quarried in Johnstown, N.Y., where each stone is inspected by the construction team's geologist, before being floated down the Hudson River in barges.

When construction is finished, the top 7.5 ft. of the largest breakwaters will be visible at mean tide. Navigational lights will be placed on top to prevent accidents with boats and jet skis.

"It's about 120,000 tons of stone that we are going to be placing out there in the bay," noted Robinson, of Weeks Marine. "The largest stone we will set on this project is about five tons, which is roughly a five-foot diameter boulder."

The Living Breakwaters is only one of several major infrastructure projects currently underway in New York to mitigate the impacts of climate change and sea level rise:

Unlike the walls, levees and berms created by these other projects, though, the Living Breakwaters is explicitly designed with the secondary goal of restoring marine habitats and ecosystems off the New York City's coast and will not be an impermeable barrier.

Staten Island's coastal area was once home to extensive wetlands and oyster beds, which helped protect it from waves and erosion. Over the last century, though, that habitat was largely erased by pollution and overdevelopment.

"The harbor is still a rich estuary, but if you look at Raritan Bay, it is a shallow, sandy bottom with a giant navigation channel dredged through it," Brashear explained to Gothamist. "We [have] said if we are going to put something in the water, we need to create something that is going to bring back that ecosystem function and really serve the diverse species that are there. There is no excuse for having a hardened shoreline that is sterile."

The Living Breakwaters have a functional lifespan of 50 years, after which they will slowly become less effective. They are designed to fight up to 18 in. of sea level rise, which may occur as soon as the 2050s, according to projections from the New York City Panel on Climate Change. But by 2100, sea levels could rise by up to 9.5 ft., according to the panel, which would completely submerge the breakwaters and the coast of Tottenville.

"They are probably already going to have to elevate homes and adapt over time, and understand that periodic flooding is going to happen," Brashear said in her remarks to Gothamist. "Living with water is going to be a part of that adaptation."

In three nearby Staten Island neighborhoods, the Governor's Office of Storm Recovery has already bought and demolished hundreds of low-lying homes in Oakwood Beach, Graham Beach and Ocean Breeze. These former neighborhoods are now being left permanently undeveloped, as a buffer against future storm surges.

Even with its new breakwaters, Tottenville will eventually need to decide one day whether to undertake its own managed retreat from the waterfront.