For the project, Cummins purchased a Sandvik QE341 mobile scalping screen from Crusher Works, a Sandvik dealer based in Birmingham, Ala., which covers the Southeast. 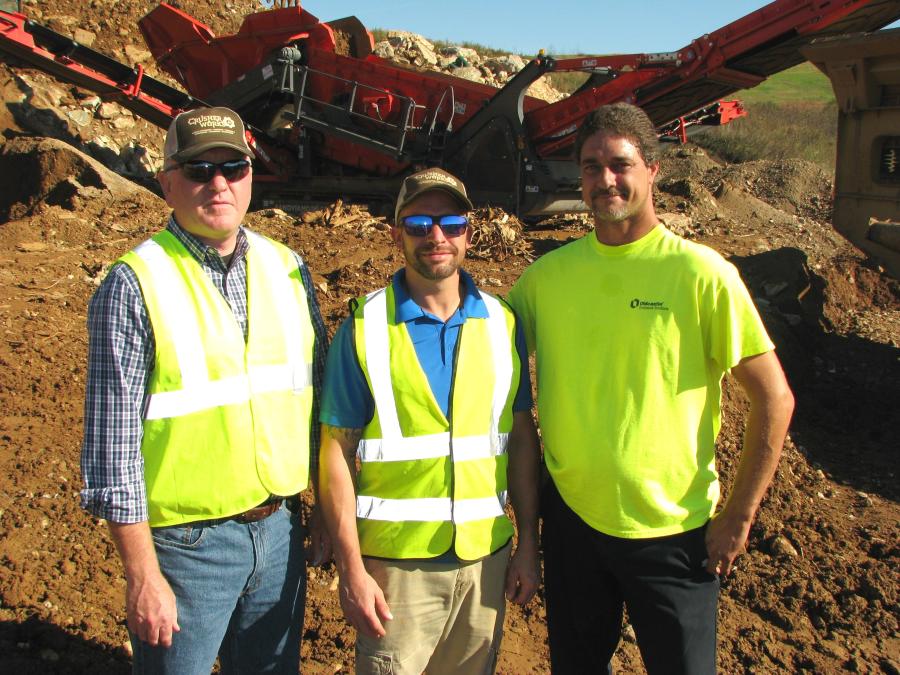 In 2007, Kevin Cummins, who is an expert in material recycling, observed that a lot of concrete and rock was going to landfills and simply being buried there. He realized that there was a need to recycle these materials in order to give them a new purpose rather than wasting them. That was the beginning of Cummins Crushing & Recycling Inc. in Cartersville, Ga.

“There was a lot of concrete being dumped in waste around Atlanta, and we saw an opportunity of setting up and making a product,” he said.

Today, Cummins is in the midst of expanding his business and adding machines that will make his operations as productive as possible. Currently, the company is working on a two-year crushing contract for DeKalb County, Ga., at the Seminole Landfill in Ellenwood, Ga. The contract involves taking concrete and other landfilled material that can have “second life usefulness” and crushing and screening it into a product(s) that DeKalb County can reuse for its own purposes for paving or for fill material, rather than having to pay for aggregate products from another vendor. Not only is this a big cost saver for DeKalb County, but from an environmental standpoint, it also is saving space in the landfill.

For the project, Cummins purchased a Sandvik QE341 mobile scalping screen from Crusher Works, a Sandvik dealer based in Birmingham, Ala., which covers the Southeast. The machine was purchased and is now being serviced by the company's Georgia location in Villa Rica, Ga.

The QE341 is being used at the landfill to separate dirt and other material from the large chunks of concrete and boulders prior to being conveyed into an Extec C-12+ mobile jaw crusher (a former Sandvik product). During the process, a Cat 330 excavator loads the material to be screened and separated into an apron feeder of the Sandvik QE341 scalper. Uncrushed product with dirt and debris is separated in the machine's screenbox, and the unused material that will not be crushed is conveyed off with a mid-sized conveyor and a second “fines” conveyor. The product that is usable and has been separated from the dirt and debris for crushing is then conveyed via an oversized conveyor on the scalper unit that feeds the Extec jaw crusher. The size of the end product material is regulated by the jaw crusher. The current production is between 800 and 1,200 tons (725 to 1,088 t) per day.

Cummins purchased the machine from Crusher Works sales representative, Jason (Jay) Doran, who is based in the company's Villa Rica location, which is owned by Neil McCoy. He explained that he chose the Sandvik because of the machine's reliability and Crusher Works' service background.

“Not too many people are set up in Atlanta to service and maintain the equipment and give you the right answers,” he said. “That's why we went with Crusher Works. Jay and I worked hand in hand together to come up with the system that we're using. They are very good to work with — they overnight parts and have them the next day. They always come to the job site and make sure that everything is running properly and take care of stuff. Neil has done an awesome job and has been there every time. He gives very good service to us and keeps in touch.”

Doran said that the scalping machine has an apron feeder so it can take oversized material without damaging the unit because it is made of steel instead of rubber.

“It can be a primary screen or a secondary screen, so you can put it behind your jaw crusher or in front of it depending on how you want your application to be,” he said. “It has a 55-inch wide oversized belt, which helps prevent blockages. The machine's screenbox lifts in all four corners by hydraulic rams which enables easy access to change screens. There are different screens for different applications, also you can adjust the screening angle to increase or decrease production depending on application and customer's needs.”

Based on a sturdy crusher-style chassis, the QE341 has been designed for strength and durability and features a heavy duty 16 by 5 ft. (4.8 by 1.5 m) screenbox. Developed with easier setup and operation in mind, it offers customers a user-friendly solution with a color-coded control panel and sequential start-up as standard.

Doran has been with Crusher Works for more than a year after working for Sandvik manufacturing mobile crushers and screens in England for 12 years. His factory knowledge of the Sandvik Mobile range is invaluable to the end user, having built the machine from the ground up and now working “in the trenches” assisting customers in finding the right solution for their application.

Dave Wornell, equipment manager of Cummins, said that working closely with the dealer is essential.

“Being able to get parts is another key reason we use Crusher Works,” Wornell said. “They have the ability to provide screens or consultation if we want to change the applications or production. They lead us in the right direction of what we're trying to do so we get a better outcome with a better productivity for more cost efficiency. Sometimes, we ask their opinion on what we need to do or jaw types to give us different sized stones for different products. Right now, we run just a general application, so for the most part we're good, but if the market changes, we've gotta change, too.”

Dekalb County has been impressed with the work that Cummins has done with the Sandvik products.

“It makes such big savings for them from buying rock,” Cummins said. “We can produce it quickly for them, and in bad weather they can keep building the roads and stay open.”

Cummins' outlook for his company involves a plan for moving even more into recycling and expanding his business to other landfills.

“We want to show people that it is a big saving other than just bringing it to the landfill and dumping it,” he said. “It saves them money.”