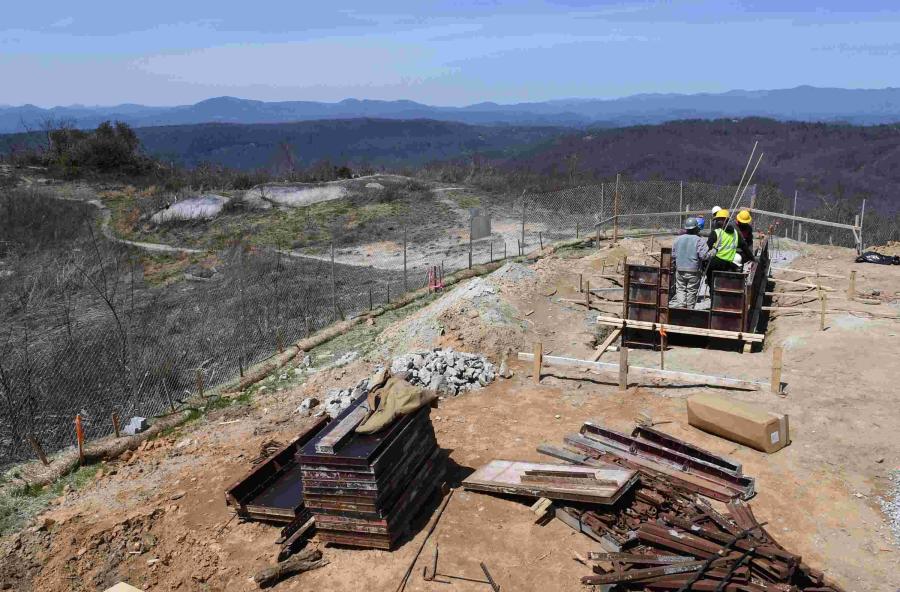 The $1.1 million project, which represents Phase I of a plan to make the 3,553-ft. peak more accessible, is expected to be completed in mid to late summer.

The Sassafras Mountain project is on the rise.

The arrival of warmer weather — which comes slower on the windswept pinnacle of South Carolina's tallest mountain — has accelerated the construction of a 360-degree observation tower at Sassafras Mountain in northern Pickens County.

"It was too cold to pour concrete for most of the winter, but we're moving along now," South Carolina Department of Natural Resources wildlife director Tom Swayngham said of the project on the state's highest point.

Even in warm weather, constructing the 40-ft. diameter circular tower 16 ft. above the ground in a remote area is a slow process.

"It's hard to get equipment to it, and hauling equipment is hazardous on roads that are steep with tight curves," Swayngham said. "So it's slow going. But when it's finished, I think we'll have something we can all be proud of."

The $1.1 million project, which represents Phase I of a plan to make the 3,553-ft. peak more accessible, is expected to be completed in mid to late summer.

Phase I includes the observation tower, a 500-ft. access trail from the parking lot to the tower that meets American Disabilities Act standards and primitive restrooms. Phase II is scheduled to feature a pavilion with modern restrooms, a picnic area, accessory trails, informational kiosks and improvements to the parking lot.

The tower will feature a visual representation of the South Carolina-North Carolina border, which bisects the mountain. The peak, about 20 miles north of Pickens, also sits on the Eastern Continental Divide. Until now, it has been accessible primarily to hikers on the Foothills Trail, a 77-mi. footpath between Table Rock and Oconee state parks.

The Palmetto Trail, which will one day link the South Carolina mountains to the sea in a continuous trail of 500 miles, also is on the flanks of Sassafras Mountain. The trail, which travels to the Sassafras summit, is being diverted away from the mountaintop while the tower is under construction.

The general contractor for the unusual project is Lazar Construction of Anderson.

Lazar Superintendent Rich Standt said the tower, which will require 500 yds. of concrete and 29,000 lbs. of steel, "will fit right into the natural environment," atop the mountain.

Standt called the process of transporting the construction ingredients up the narrow winding road "interesting," and sees the finished product as a tourist attraction in what until now has been a neglected landmark.

"I think a lot of people will want to see it," Standt said.

Funding for Phase I came from a variety of sources, including Duke Energy, the Harry Hampton Memorial Wildlife Fund and from private supporters through commemorative brick sales.

A smaller viewing platform on the west side of Sassafras, erected in 2010 by Clemson University architectural students, will remain open, along with the parking lot next to the platform. That overlook provides a view primarily to the west and south, looking out onto the mountains of South Carolina, Georgia and North Carolina.

A Thursday visitor to the present viewing area was anxious to step onto the new one.

"You could kinda see from the platform, but there were a lot of bushes in the way. With the new one, you'll be able to see to the north, and all around," Gary Aten said.

Sassafras Mountain is part of the Jim Timmerman Natural Resources Area at Jocassee Gorges, managed by the South Carolina DNR.