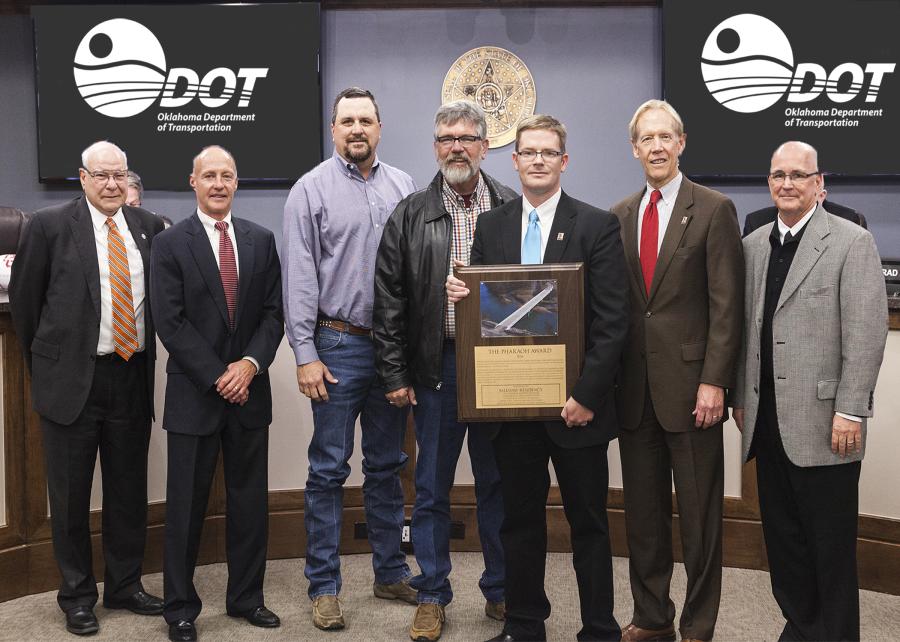 Highlights of the Oklahoma Transportation Commission's Monday, Dec. 5 meeting include recognition of an award-winning bridge project, approval of a contract for the next phase of I-35/I-240 Crossroads interchange reconstruction and a contract to rehabilitate sections of I-35 and I-40 pavement in Oklahoma County. The commission also awarded contracts for bridge rehabilitation on U.S.-64 in Pawnee County, I-40 bridge reconstruction in Pottawatomie County and SH-11 improvements in Grant County.

The commission recognized engineers with ODOT's Division One and contractor Manhattan Road and Bridge Co. for their work on the award-winning Combs Bridge in Cherokee County. Replacement of this county bridge over the Illinois River was recently honored by the Association of Oklahoma General Contractors with the Pharaoh Award for the best bridge project in the state in 2016. The $2.8 million project was funded through the County Improvements for Roads and Bridges program and faced significant environmental challenges, including heavy flooding on the river in 2015.

The commission approved a $10.6 million contract for the next phase of Crossroads Renewal 240, the ongoing effort to reconstruct the I-35/I-240 interchange in south Oklahoma City. This second phase will address some of the area's worst congestion and traffic safety issues by reconstructing the eastbound I-240 ramp to southbound I-35 and adjacent service road. The contract includes possible financial incentives for early completion of the work. Also approved was a $10 million contract for concrete pavement rehabilitation on I-35 from N.E. 122nd St. north into Edmond and I-40 from May Ave. to Meridian Ave. in Oklahoma City. Construction on both projects is expected to begin in the spring.

Commissioners awarded major contracts to rehabilitate the U.S.-64 bridge over Cowskin Creek near Cleveland, reconstruct an I-40 bridge over a county road near Shawnee and add shoulders and replace several bridges on SH-11 near Medford.