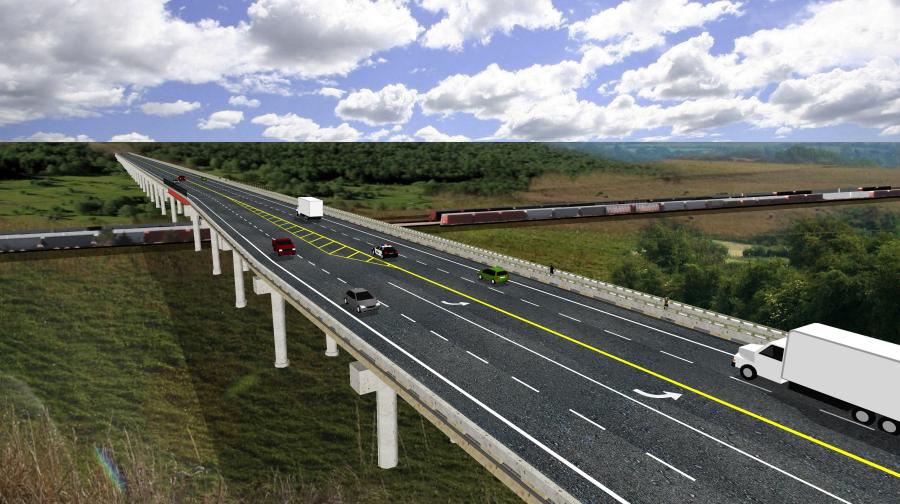 As shown in this computer-generated rendering, the new U.S.-77 Purcell/Lexington bridge will be a modern four-lane structure with a left turn lane at the intersection at Canadian Avenue in Purcell. (Oklahoma DOT photo)

In about two years' time, Oklahomans will see a modern four-lane bridge between Purcell and Lexington standing in place of the iconic, but problematic existing structure. Action taken by the Oklahoma Transportation Commission at its Sept. 5, meeting included a vote to award a $36 million contract to Webber LLC for replacement of the James C. Nance bridge that carries U.S.-77/SH-39 over the South Canadian River and BNSF railroad. The Woodlands, Texas-based company was the lowest of three bidders. The contract includes $2 million in possible financial incentives for early completion of the work.

Half of the new bridge will be built alongside the existing structure and all traffic will be moved over. This first phase is expected to take about one year to complete. The old bridge will then be removed to make room for the second half of the new bridge. This will allow the bridge, which carries more than 10,000 vehicles per day, to remain open during all stages of the two-year construction. The new bridge also will have a sidewalk for pedestrian traffic.

“This bridge is a lifeline between two cities that are part of one community. We thank the people of Purcell and Lexington for their patience in 2014 and are so excited that this day has already come,” said Mike Patterson, Oklahoma Department of Transportation executive director.

The existing 80-year-old bridge was closed by ODOT as a safety measure for more than four months in 2014 after several cracks were discovered during the final inspection of recently-completed bridge rehabilitation work. With the help of national experts Modjeski and Masters, engineers discovered that the original construction contractors had exercised an option to use a rare manganese alloy instead of steel when building the bridge in 1938.

This unique metal is not found in any other bridges in the state and is prone to cracking when welded upon. During ODOT's emergency repair project, travel between the two cities required a 45-minute detour on the interstate through Norman. Since reopening with a load posting in June 2014, the bridge has been frequently inspected for safety.

“All of the stakeholders recognized the importance of replacing this bridge quickly and came together to help fast-track this project and get it to bid in three years, rather than 10,” said Casey Shell, chief engineer. “It's a testament to the good working relationship ODOT has with our state and federal partners.”

At the time of the emergency closure in 2014, replacement of the bridge was not yet scheduled in ODOT's Eight-year Construction Work Plan. However, ODOT immediately began efforts to accelerate the preconstruction process and prepare a construction project to go to bid, a lengthy process that can often take a decade or more to complete.

The bridge's historic significance was given much consideration during the planning and environmental review process, which included a public meeting and comment period in 2015. The department also consulted with the Oklahoma State Historic Preservation Office, the cities of Purcell and Lexington and other preservation groups on the best plan to address the bridge.

In trying to minimize the impact to the community, ODOT submitted a plan to build the new bridge in place of the existing structure, which was approved by the Federal Highway Administration.

This plan lessened the amount of new right-of-way needed and environmental impacts to the South Canadian River, allows U.S.-77 to remain open during construction and preserves the existing intersection at Canadian Avenue in Purcell. The design of the new bridge incorporates aesthetic elements of the historic structure, including reuse of some of the original railing on top of the bridge. Educational displays with information on the structure's history will also be erected at each end of the bridge for the public to view.