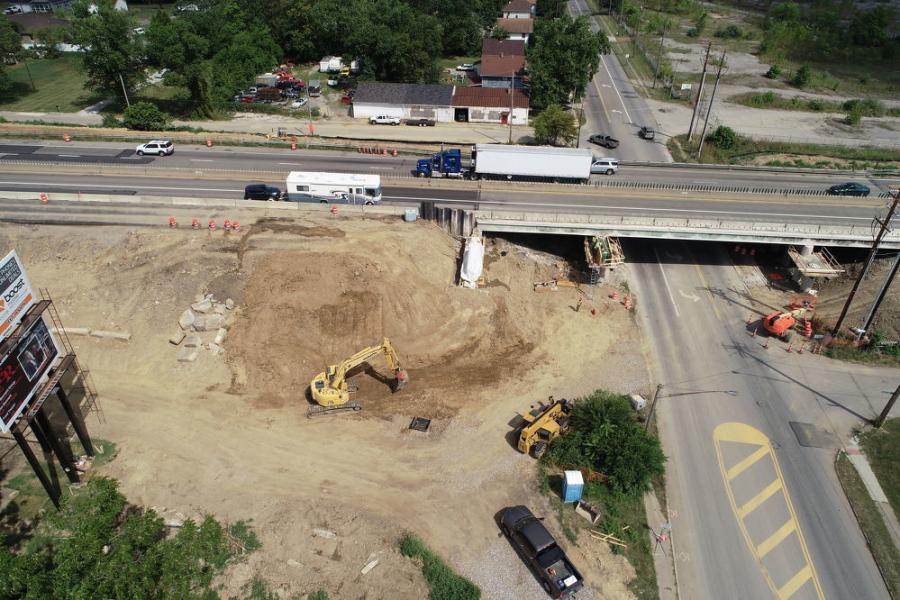 Construction includes the replacement of various bridges, construction of a median barrier and shoulder widening along U.S. 30, along with pavement replacement. (Ohio Department of Transportation photo)

The Ohio Department of Transportation (ODOT) is overseeing a $62 million project that will reconstruct U.S. 30 between state Route 309 and Fifth Avenue in the city of Mansfield. Construction includes the replacement of various bridges, construction of a median barrier and shoulder widening along U.S. 30, along with pavement replacement. 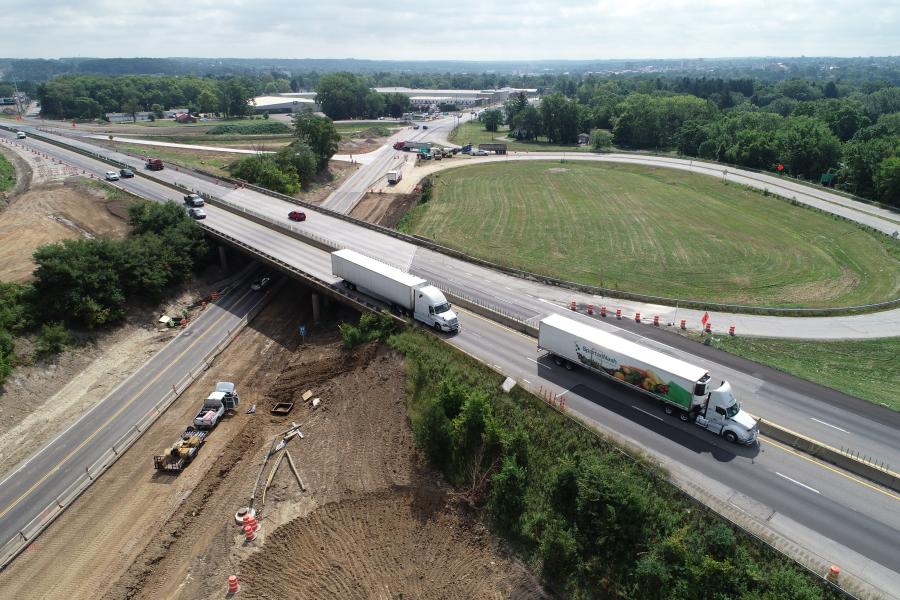 "This section of U.S. 30 through Mansfield was originally constructed in the late 1950s," said Kaitlyn Thompson, ODOT public information officer of District 3. "The pavement and structures have significant deterioration, and the city of Mansfield and ODOT have to continually perform work and expend funds to maintain the roadway for the traveling public."

The project is funded through mostly federal and state funds. Moving forward with construction at this time was an easy decision, according to Thompson.

"The pavement through this section of U.S. 30 continues to deteriorate and create maintenance issues and costly repairs. The funding was available to award and perform the work on this significant project."

Other tasks include increasing the vertical clearance under the state Route 545 and the Fifth Avenue bridges; removing the bridge over a driveway off Longview Avenue; completing maintenance on the U.S. 30 bridge over state Route 13; and adding corridor lighting and replacing the right-of-way fencing.

Crews must tackle deteriorating pavements and poor bridge conditions on U.S. 30, which will improve outdated design features to reduce the number and severity of crashes on U.S. 30 and its interchanges.

U.S. 30 was constructed beginning in 1956. The road was most recently repaved more than a decade ago, with pavement repairs in 2017, but the concrete base underneath the asphalt has suffered and requires ongoing repairs. The original bridges remaining in this section also are nearing the end of their lifespan.

Currently, crews are boring and jacking for conduit under U.S. 30 mainline.

Approximately 20 percent of the project contract has been completed after the first construction season. The work has created some issues for drivers, although nothing major.

"Traffic has been maintained on U.S. 30, with minor delays during peak travel times," said Thompson. "There were some minor side road and ramp closures in 2020, but those were scheduled and the public was notified ahead of time. 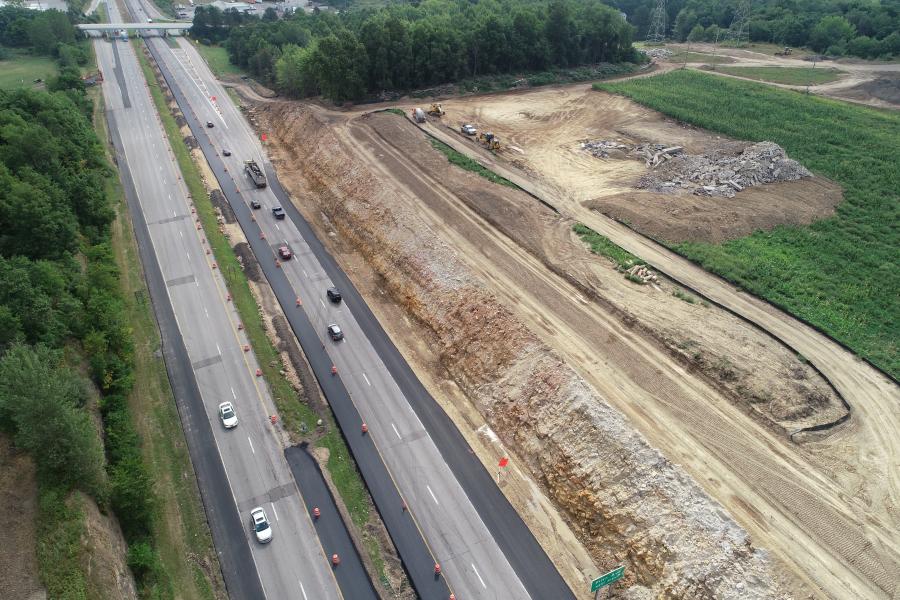 "The traveling public seems to be coping well, so far. Most of the feedback has been positive and many of the motorists who commuted through this area understood how rough of a condition U.S. 30 was in, and had positive feedback about this section of roadway being reconstructed."

Construction crews have typically been working 7:00 a.m. to 5:00 p.m., Monday through Friday.

"This is a much-needed project that addresses the deterioration of the existing pavement," Thompson said

Mike Fair, district construction engineer. It has been long anticipated, and will address deteriorating pavements and poor bridge conditions on U.S. 30. It will improve outdated design features to reduce the number and severity of crashes on U.S. 30 and its interchanges."

Although still early in the process, crews have already finished minor work on side roads; rock cut excavation and ramp construction; and installed temporary pavement on U.S. 30. All mainline structure work, along with all mainline full depth pavement removal/replacement, has yet to be completed.

Fair noted that the elements have not had an impact on construction, to date.

"At this point in the project, there have been no impacts due to weather."

The total cubic yards of excavation and embankment on the project is estimated at 370,816. Four total mainline bridges will be replaced. All bridges are three-span, continuous steel beam with reinforced concrete deck slabs. They're supported on reinforced concrete piers and semi-integral abutments.

Jeff Labaki, ODOT project engineer, said the most time-consuming part of the assignment involves the structure construction, which will be the critical items of work in respect to time on the project.

This section of U.S. 30 is heavily traveled and there is limited space in the area. Being able to maintain traffic on the roadway and at the same time reconstruct the pavement was one of the biggest challenges faced.

During construction, crews are using excavators, dozers, asphalt pavers, various milling machines, rollers, cranes and graders. There will be all types of equipment on and off the site throughout the duration of the project. The main materials are asphalt, concrete, aggregates and steel.

There are four sets of bridges on this project, which means a total of eight to be constructed. The work involves demolishing the existing bridges and then replacing them. This calls for new piling; foundation tubes that will be filled with concrete to make the supports; a concrete substructure; steel beams to be placed; then a concrete deck and parapet walls to be poured.

The majority of the median barrier will be made using a slip form. Steel rebar will be placed along the roadway and then a mold will go over the rebar that will form the median. Some of the locations, including where there are light poles, will need to be poured by hand, using an individual mold.

Additional excavation of the embankment is needed in order to be graded for the shoulder widening. Crews will then add materials to build up the roadway to be constructed. 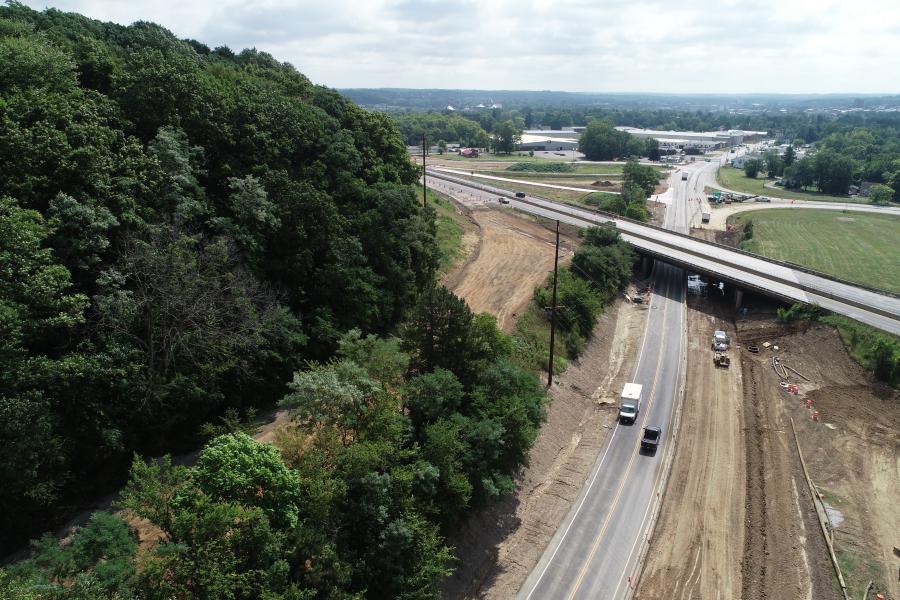 Pavement replacement along U.S. 30 began in April and continues through the end of next year. Workers will remove the existing pavement then cement stabilize the existing subgrade. They will install new underdrains; a new aggregate base; and three separate lifts of asphalt to construct the roadway. Once completed on one side of the roadway, traffic will be switched and the same method will be used on the opposite side the following year.

For resurfacing, contractors will use graders to level out each layer of aggregates and then use asphalt pavers to put down each layer of roadway surface. Rollers will be necessary to compact and smooth each layer. The original pavement was overlaid with asphalt several times since.

Early on, tree removal took place along the project limits. Some of the shoulders were reconstructed in order to maintain traffic in the future. There were median crossovers added in order to allow for traffic at ramps and along U.S. 30 throughout the course of the project. Utility relocation also was performed.

Regarding excavation work, there was a large rock cut that needed to be completed on slopes where conditions were deteriorating and could become unsafe. Large track hoes with special hammers were used to break the rock and cut it back for much safer conditions.

"This is a huge project for District 3, as it is the second largest project we have sold in our district," said Fair. "The project itself will be a big improvement for the community as it will address outdated safety designs and improve the overall condition of the roadway."

Shelly & Sands Inc., a multi-disciplinary construction company experienced in heavy highway work, serves as the general contractor for the project, which has been in the planning and design phases for years. Construction began in April 2020 and continues through spring 2023. CEG