Officials Green Light $1.7B in Funding for DART Line 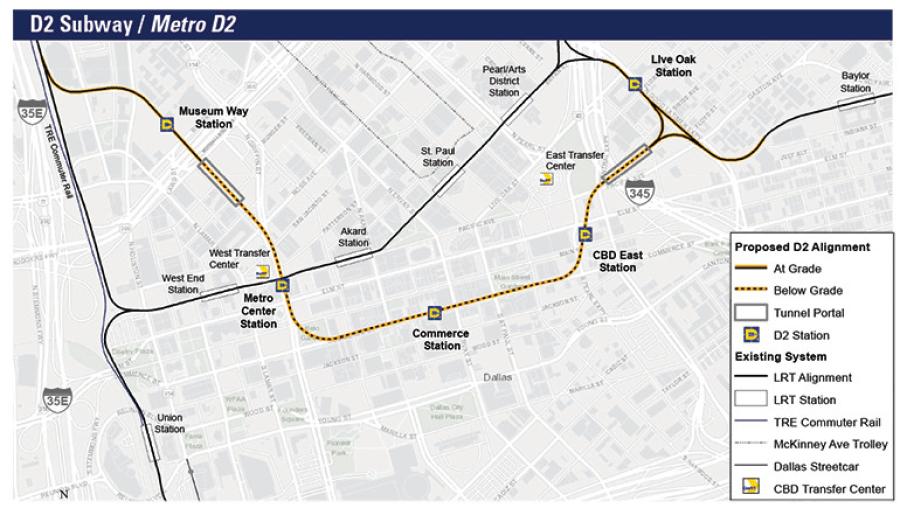 The city council also said it would support DART in obtaining a Federal Transit Authority [FTA] grant to help fund the project. Right now, the cost estimate for the subway and light rails is $1.7 billion, with up to 50 percent of that number able to be funded with a federal grant.

D2 has been an infrastructure project for the city since 2007. The planned route would include three subway stations and two above-ground stations from Victory Park to Deep Ellum, with service on the green and orange lines. Originally scheduled to be finished in 2024, the subway is on track to be built sometime after 2022 and fully operational in 2028, pending Dallas City Council and DART Board approvals.

DART said the route would not only revitalize the downtown district by giving people more rail travel options in the area and supporting economic growth, but it would also give more flexibility and structure to DART's existing rail system.

"We still have some issues to work out, but I am hopeful that we can find solutions that are in the best interests of the people of Dallas now and in the years to come," Johnson said.

"Downtown Dallas Inc. has steadfastly supported D2 for several years," said Garrett in a statement. "We are pleased that the city council advanced this transformative project. We will continue to work with all stakeholders to ensure the second Downtown DART line best serves our city."