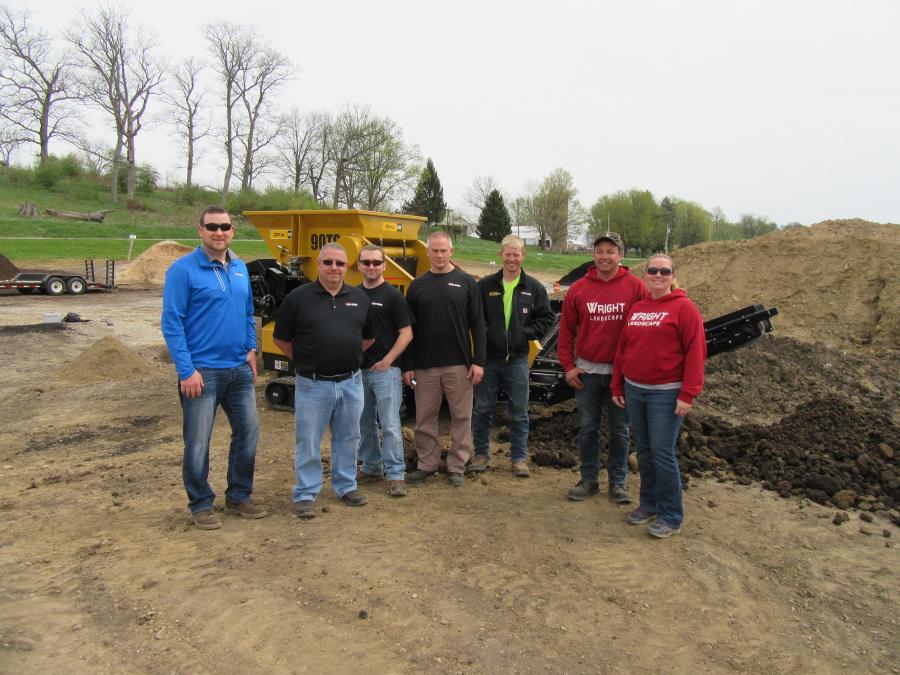 The landscape supply company's owners, husband and wife team, Shannon and Gretchen Wright, have developed a strong relationship with both Ohio CAT and Screen Machine Industries over the years. As a result, when they were looking for a new machine with the versatility to process both soil and aggregates, their decision to contact their Ohio CAT representative, Kyle Bodkin, for a recommendation was a natural. 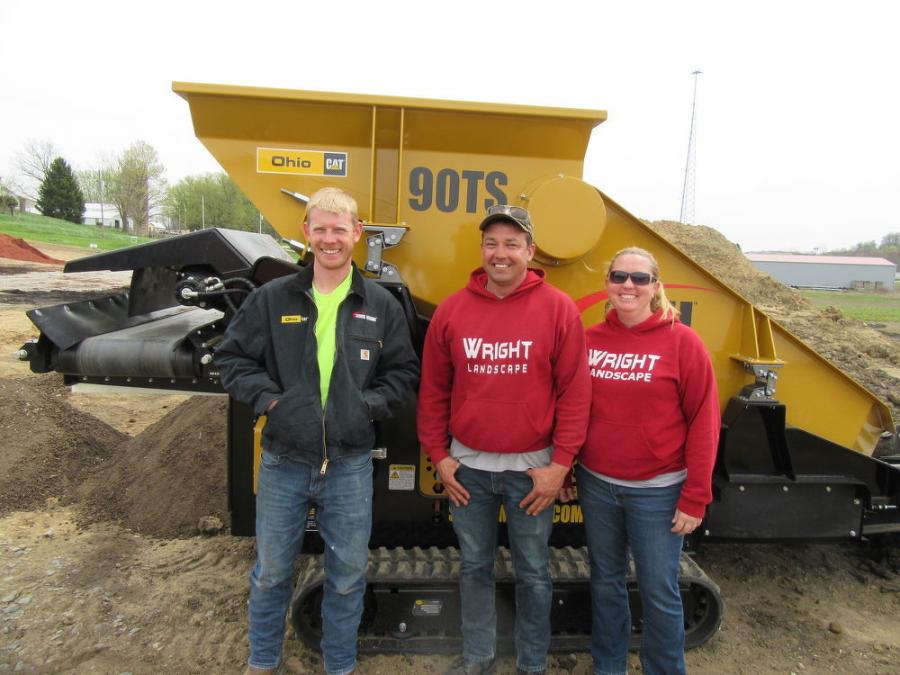 Based in Lancaster, Ohio, Wright Landscape Supply & Marketplace has grown substantially in the 23 years since Shannon and Gretchen started the company. Reflecting on the company's beginning, Shannon recalled that they felt they'd reached a pinnacle when they had two push mowers and a van for transport.

Initially named Cut Right Lawn Services Inc., the company established a strong reputation throughout Lancaster and Fairfield counties for dependable service and high quality work. The company added services as it grew, including snowplowing and additional landscaping work. Shannon received a Custom (Lawn Chemical) Applicator's License from the State of Ohio Department of Agriculture in 1998 and has continued to maintain a perfect safety and compliance record.

As demand for the company's services grew, so too did the size and complexity of the work it conducted. Subsequently, the company found that sourcing the quality of landscape products it sought for projects was a constant challenge. In response, Wright Landscape decided to use the experience and knowledge it had gained to branch into landscape supply.

In 2018, the company opened its second location in Chillicothe. As Shannon explained it, the company's continued growth is due in large part to the relationships they've developed with their customers, and conversely, with relations they've developed as customers themselves. One prime example, he said, is the relationship that developed with the sales and service team at Ohio CAT as they built their fleet of equipment. Shannon said that although they're just a small company, throughout all of their dealings with Ohio CAT, they've been treated like they were just as important as one of the equipment dealer's largest customers.

Wright Landscape Supply & Marketplace's services include landscape and garden design, installation and repair, erosion control, shrub and tree planting and a variety of maintenance services. When the company needed equipment or service, Ohio CAT responded in a timely way. Shannon said that his Ohio CAT representative, Kyle Bodkin, is available to take calls virtually any time of day or night. He also noted that Keith Musgrave and Karla McCalla of the Ohio CAT Rental Store continue to provide outstanding support, as well.

Like Ohio CAT, Shannon said that his company is happy to serve both large and small customers in and around Lancaster and Chillicothe and has supplied materials for everything from contractors working on pipeline projects to "weekend warriors" needing a yard of topsoil.

In 2018, the company purchased a Screen Machine Might II, a towable trommel screening plant ideal for processing topsoil, mulch and compost.

"The machine runs nearly every day and is extremely easy to maintain and operate," Shannon said, adding that a person can be fully trained on the Might II in a few hours.

He's also impressed with how quietly the machine is. "You can stand right next to it while it's running and have a conversation," he said.

Given the positive experiences that Gretchen and Shannon have had with both Ohio CAT and Screen Machine, they were the natural choice when they decided to investigate a new machine that would provide greater versatility. While they're extremely pleased with their application specific Screen Machine Might II, Shannon said they wanted a machine that also was capable of processing aggregates as well as soil and biomass materials. 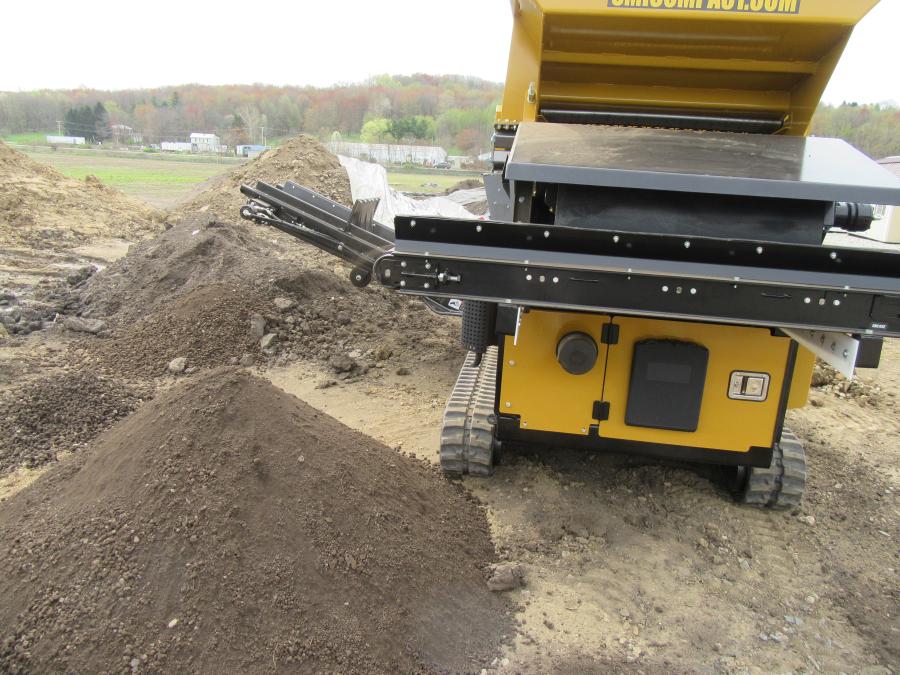 Fines are conveyed at the rear of the SMI 90TS.

Bodkin felt the SMI 90TS would be ideal for meeting the diverse needs and processing requirements of Wright Landscape Supply & Marketplace (The "90" in product's name reflects its rated output capacity of 90 tons per hour while the "TS" stands for tracked screen.)

Shannon was greatly impressed with the ease of transport and that the set up for the demonstration at his facility took only minutes. He and Gretchen both liked the tracked mobility of the SMI Compact 90TS, noting that the unit could easily be moved from one processing station to another with speed and efficiency. In its size classification, tracks are a unique and extremely beneficial feature of the 90TS. In addition, he felt the one-touch functionality in which one switch turns on all of the functions greatly simplified the screens operations.

The remote-controlled SMI 90TS, powered by a Kubota 3-cylinder, 25 hp. water-cooled diesel engine, features a double-deck screen, two hydraulically folding stockpile conveyors and one fixed conveyor for fines. The conveyor's system consists of two 22-in. wide belts for oversize and midsize materials and a 19-in. fines product belt. Weighing in at only 6,272 lbs., the highly transportable compact unit is 14.1 ft. long by 6.2 ft. wide by 7.10 ft. high when set up for travel and 18.4 ft. long by 10.10 ft. wide by 7.2 ft. high when in operational mode. Given the unit's size and transportability, versatility and ease of use, the unit is ideal for landscaping operations, rental applications and for contractors looking for a smaller unit to transport and process materials on the job site.

In addition to Bodkins, several of Screen Machines' representatives were on hand for the demonstration, including SMI Compact Sales Manager Timothy Miller, Product Support Manager Scott Wagner and Director of Engineering Matt Brinkman. 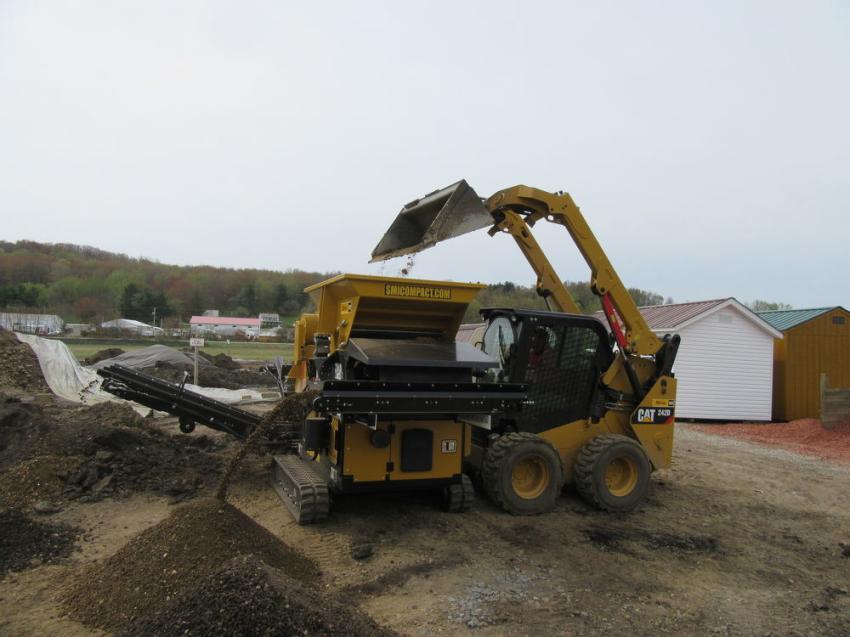 The unit’s compact size makes it easy to load with a skid steer or excavator. 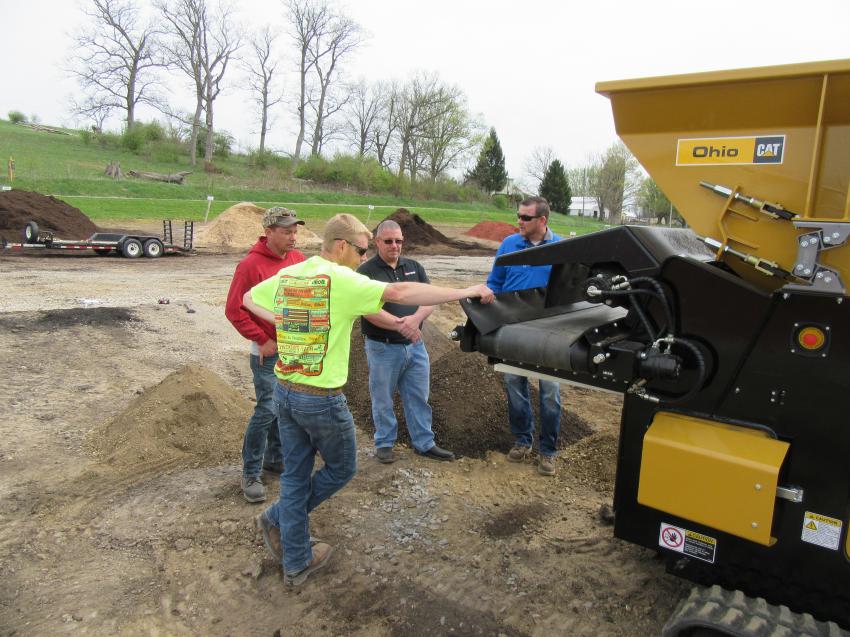 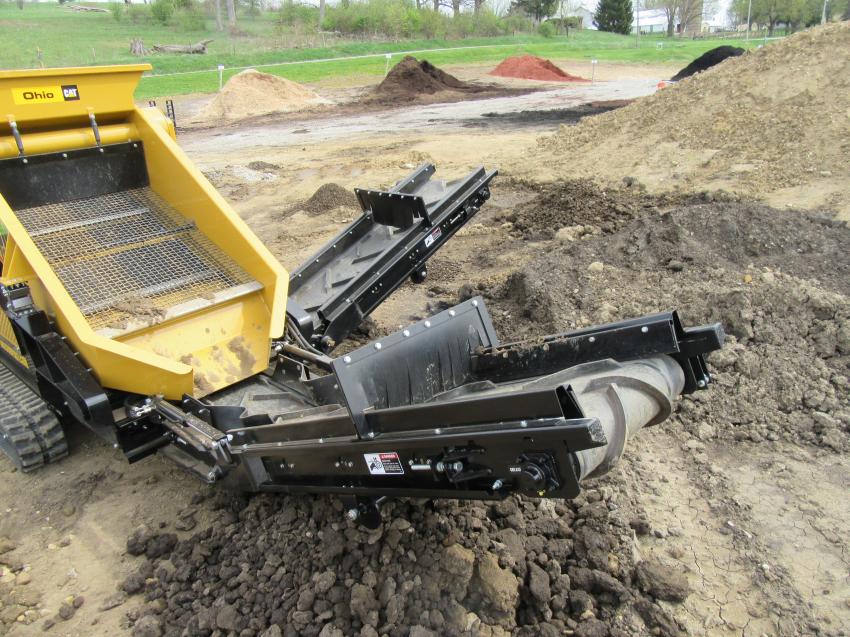 The SMI 90TS’ conveyor system consists of two 22-in. belts for mid-sized and oversized materials, while the conveyor for fines is located at the rear of the machine. 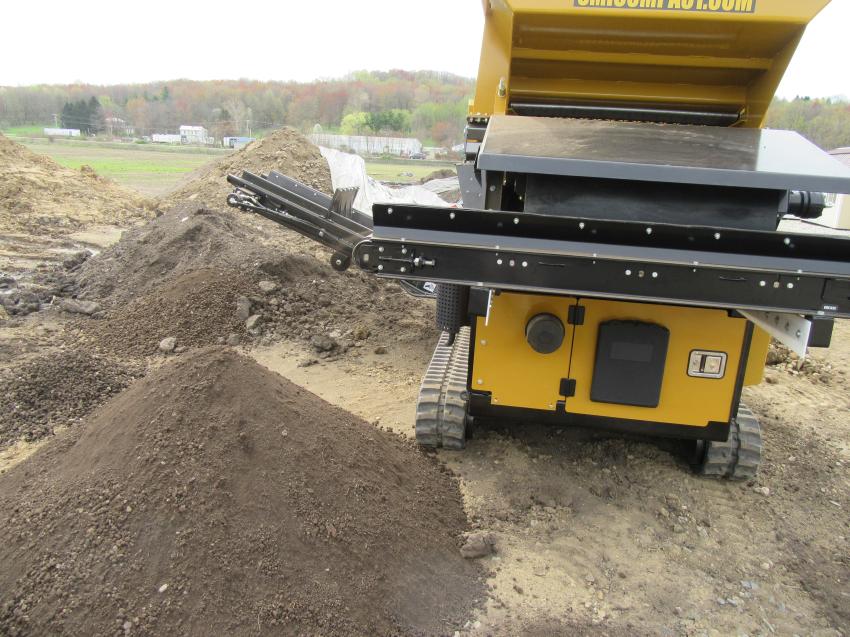 Fines are conveyed at the rear of the SMI 90TS. 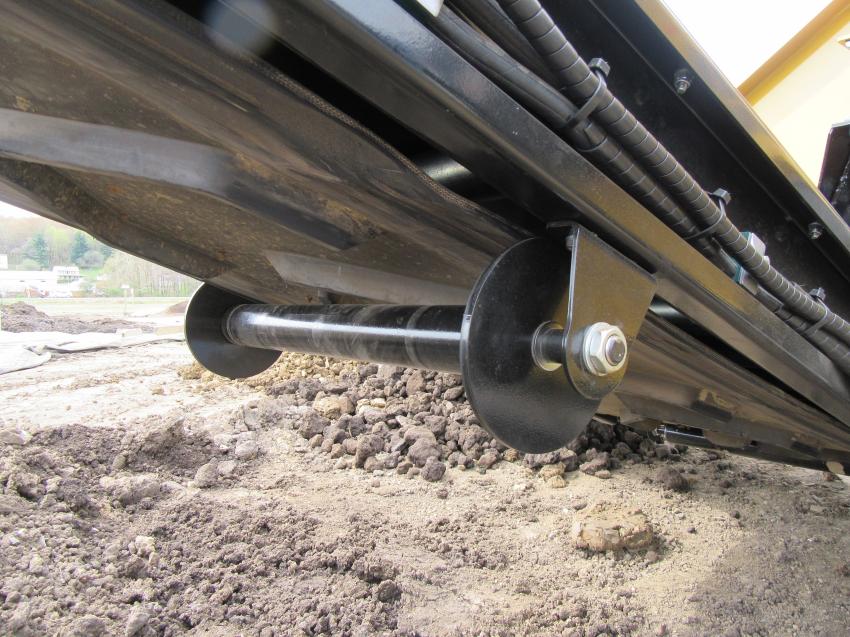 The conveyor system features guide rollers on the underside of the conveyors to keep the belt from tracking off center. 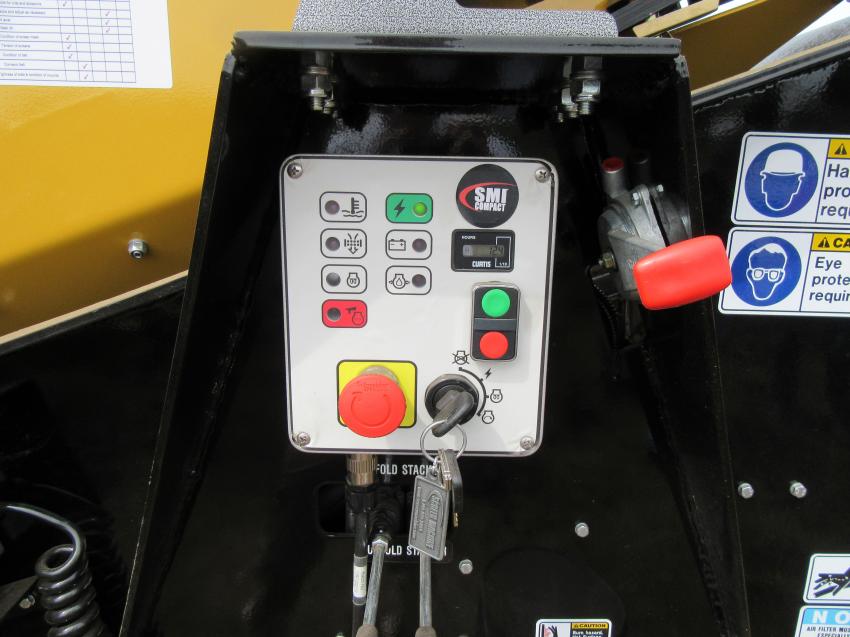 The one-touch controls provide access to all functions with the flip of one switch. 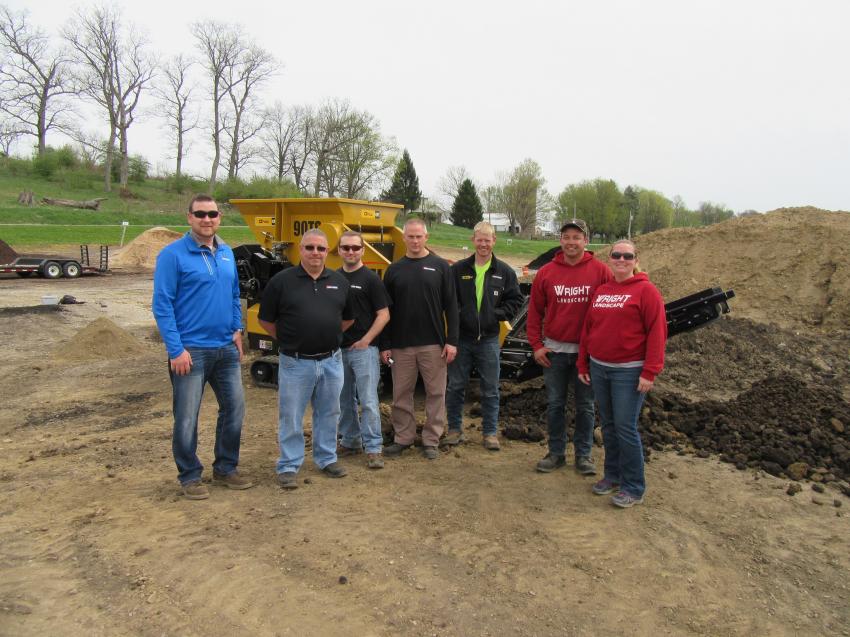 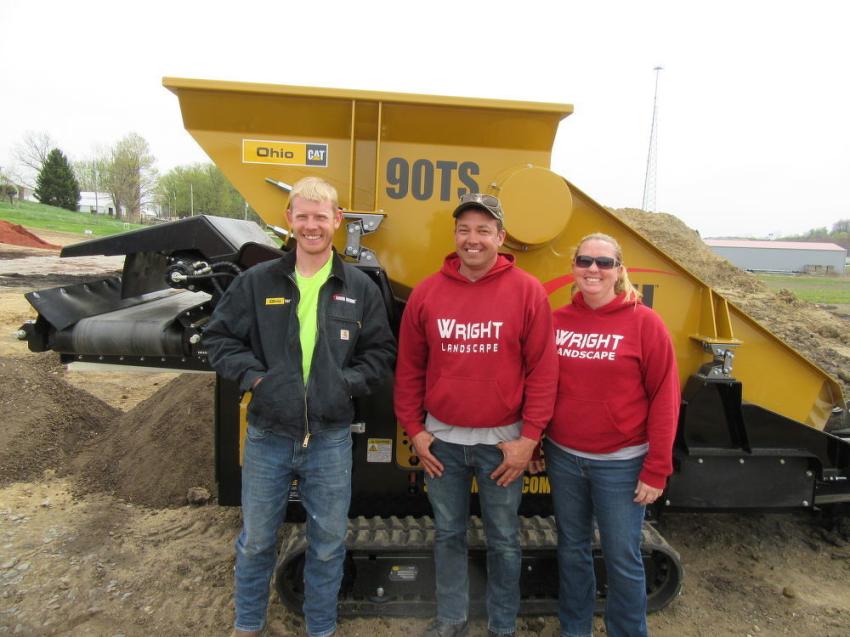