Oklahoma Transportation Commission Awards $95M in Contracts in May 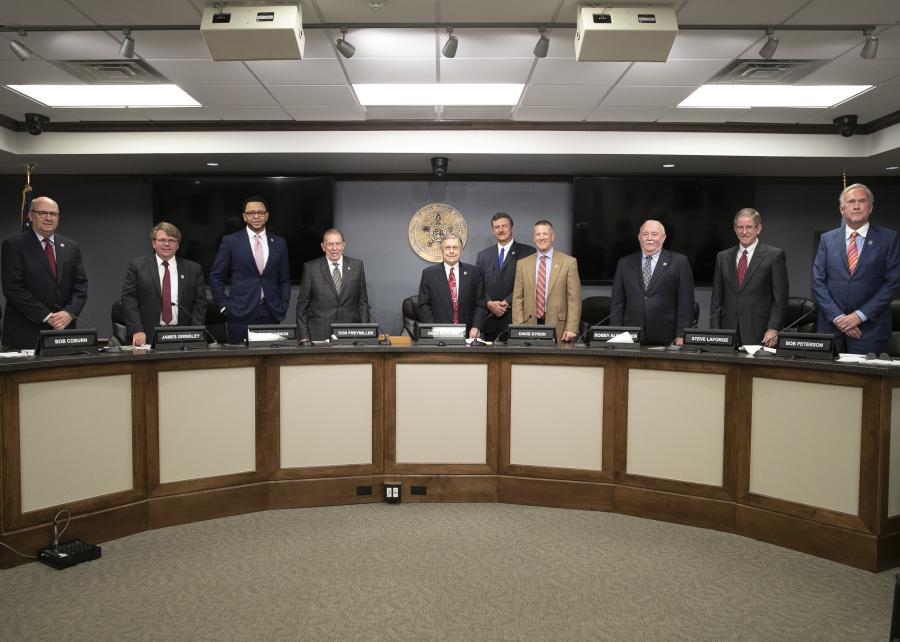 Six new members of the Oklahoma Transportation Commission took part in their first meeting on May 6.

Highlights of the Oklahoma Transportation Commission's May 6 meeting include introduction of several new commission members, a briefing on an emergency Oklahoma Department of Transportation project to repair an I-40 bridge in El Reno and updates on recently-signed speed limit legislation and status of several projects that have been rescheduled after being delayed by the lapse in federal funding earlier this year.

Among the contracts awarded were work on SH-37 in Grady County, SH-29 in Stephens County, SH-78 in Bryan County and SH-3/N.W. Expressway in Oklahoma City. A project also was programmed to install new pavement striping on several highways in the Oklahoma City metro area. 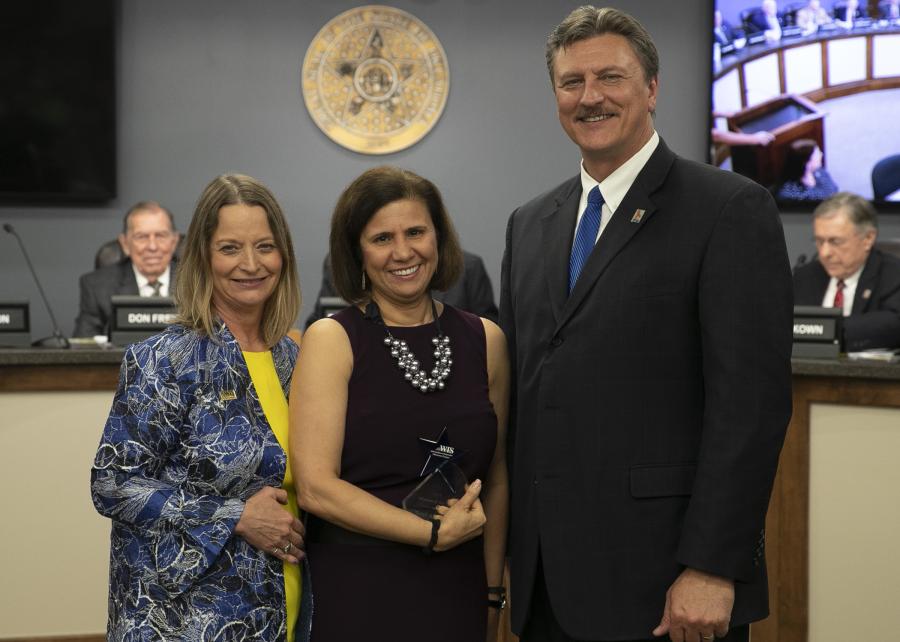 In a special presentation, Women's Transportation Seminar International, Oklahoma Chapter Vice President Sharri Hiller presented ODOT Chief of Media and Public Relations Terri Angier with its "Woman of the Year" award for serving as an outstanding role model for supporting programs which provide leadership training, professional development and networking opportunities for women in transportation. Angier is the second recipient of the award from the organization, which supports advancement of women in the transportation industry. Angier has worked for ODOT for nearly 30 years and oversees all aspects of public relations administration and information management for the agency.

Secretary of Transportation and ODOT Executive Director Tim Gatz briefed the commission on a nearly $300,000 emergency repair to the I-40 bridges over US-81 in El Reno. A routine inspection in April discovered excessive pavement pressure forces had closed some expansion joints and damaged several bridge beams. The bridges are safe and remain open to traffic as repairs are ongoing.

Gatz updated the commission on recently-signed legislation regarding speed limit increases, telling commissioners that the agency will be taking a close look at segments of rural interstate that could possibly support increased speeds of 75 mph; however, this will be an ongoing effort and not have an immediate impact. He also reported on several major projects that were expedited to be rescheduled after the lapse in federal funding earlier this year and on design updates to an upcoming $140 million U.S.-69 reconstruction project in Bryan County following meetings with the Choctaw Nation and the Town of Calera.

Gatz also announced that ODOT's Deputy Director and Chief Financial Officer Russell Hulin will be retiring in June, concluding a 35-year career with the state. Director of Capital Programs Dawn Sullivan will succeed him as Deputy Director, becoming the first woman in the role.

They also approved a $6 million contract to resurface nearly seven miles of SH-3/N.W. Expressway and update the traffic signals at several intersections between SH-74/Lake Hefner Parkway and the John Kilpatrick Turnpike in Oklahoma City.

As part of the consent docket, commissioners approved a programming item for installation of new grooved pavement striping on sections of I-44, I-40, I-235 and SH-74/Lake Hefner Parkway in Oklahoma City to improve visibility during nighttime and rainy weather conditions. They also approved certification of county road mileages, which is required annually by state law. A total of 67 mi. were added to the county system statewide, largely due to changes in city boundaries. This data is used by the Oklahoma Tax Commission for apportionment of state motor fuel tax revenue to each county for roads and bridges.

The nine-member Oklahoma Transportation Commission, appointed by the governor and legislative leadership to oversee the state's transportation development, awards contracts every month for road and bridge construction. The commission's next meeting is scheduled for 11 a.m. June 3.

Contracts, bid information, the commission's monthly agenda and project details can be viewed at odot.org.