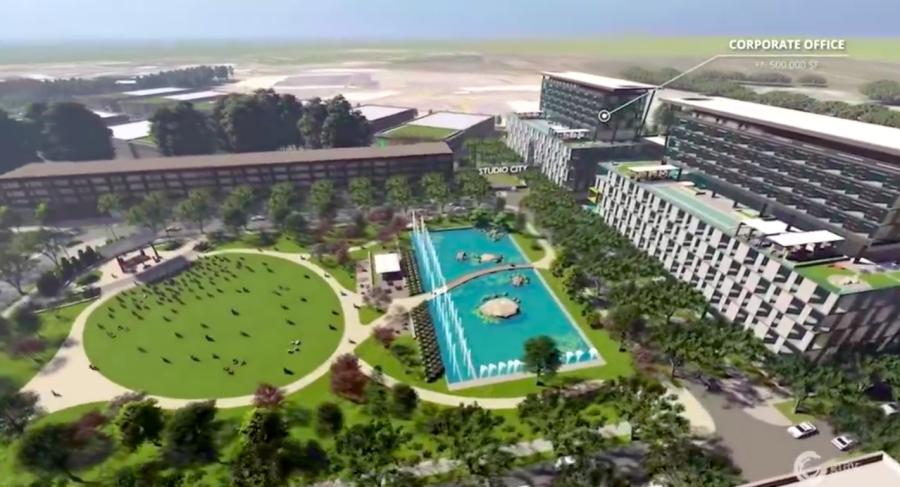 A fly-through video released by Gray TV shows how offices could be incorporated near greenspace. (Gray Television image)

Gray Television, an Atlanta-based media company, has purchased Doraville, Ga.'s shuttered General Motors facility and will build its own 127-acre master-planned community with a backbone of movie and TV production facilities.

The digital media and broadcasting company operates in 57 markets across the country. Plans call for Gray to turn the former auto plant into what company heads are calling a "Studio City," the largest blend of Hollywood/mixed-use in Georgia.

With the finalization of a deal with property developer Integral Group late in March, Gray's initial plans would include 10 television and movie production studios, plus an e-gaming facility. In addition, a large mix of apartments, townhomes, hotel space, restaurants, retail, and corporate offices also is on the drawing board, as well as communal greenspace and water features, according to an announcement from Gray Television.

The Doraville Downtown Development Authority unanimously voted to transfer the property to Gray Television on March 29.

Doraville leaders expect Gray's plan will create thousands of jobs and a wave of investment at the massive site where Interstate 285 meets a MARTA line and Peachtree Road on Atlanta's northside. Currently, it's home to just a few companies, including Third Rail Studios, the Serta Simmons Bedding headquarters and Asbury Automotive.

"The City of Doraville is thrilled to partner with Gray Television on this historic development," Doraville Mayor Joseph Geierman said in a report from Atlanta's WSB-TV. "We have been working with Gray for months to reimagine the old General Motors plant. Together, we have developed a plan which will attract thousands of new jobs and millions of dollars of new investments. Our plan represents a huge leap into the future of our city."

Gray envisions producing its TV projects at the new studio, but the vast amount of space available will be reserved for outside film companies to lease, said Powell in an online post.

The Atlanta Journal-Constitution reported that Gray would receive up to $1.5 billion in bonds, a means to help finance construction, that Doraville's economic development authority had previously issued to Integral.

Geierman told the newspaper that Gray is "the user that we've been hoping for since the [GM] plant closed back in 2008," while other city leaders pointed to Gray's financial health (a $2 billion market cap) as a positive sign.

Gray's investment is expected to be the largest in Doraville since just after World War II, when the sprawling automobile factory began operations. The GM Plant opened in 1947 and operated for decades until it was shut down in 2008 as part of the automaker's cost-cutting. Crews demolished the plant in 2015.

Phase 1 of Gray Television's "Studio City" development could break ground as early as this summer and include a few of the studios, residences and a pavilion with green space for live music, WSB-TV reported. Filming at the site should begin in 2022 and the entire project could wrap within five years.