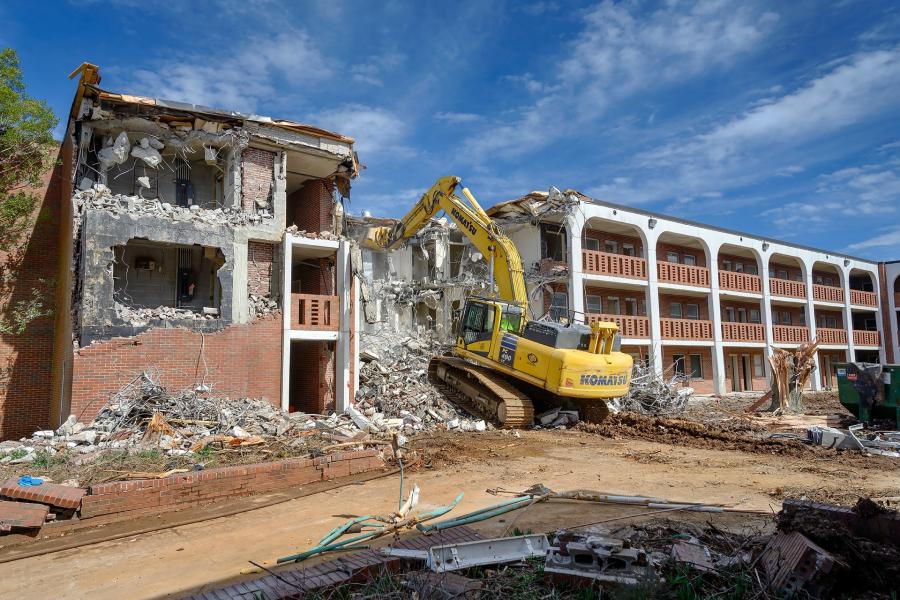 Demolition has started at Ezell-Abernathy Halls. The site will soon house the new building for MTSU School of Concrete and Construction Management. (MTSU Facebook photo)

Demolition of Abernathy and Ezell halls on the campus of Middle Tennessee State University (MTSU) in Murfreesboro, Tenn., began in February, clearing the way for the new School of Concrete and Construction Management slated to open in fall 2022.

By March 5, approximately a quarter of Ezell Hall was demolished, with a giant chunk of gray concrete, rebar and bricks lying in a pile.

"We're in the process of taking the Ezell building down and doing asbestos removal on the first floor of the Abernathy building," said Jerry Young, project supervisor with Hoar Construction, the prime contractor based in Birmingham, Ala.

Located on the east side of the MTSU campus near Walker Library, Ezell and Abernathy Halls opened in 1973.

Due to the age of the buildings, asbestos was present in the flooring.

"They completed asbestos abatement before the demolition could start this process began," explained Jimmy Hart, senior director of news and public affairs at MTSU.

Abernathy and Ezell were shuttered in 1999 because loose concrete in the buildings created unsafe conditions. The university had to relocate between 375 to 400 students to other dorms.

Young said the structural failure is "not typical" for buildings that age. According to MTSU, a mistake in the initial pouring of the concrete during construction created fragmentation in the walls and ceilings, which caused the ceilings to deteriorate.

Although students were moved from the dorms, Ezell Hall was partially renovated in 2003 and became home to offices, recording studios, classroom and research labs, Hart said.

"We also had the rock museum for a time in Ezell until the renovated Davis Science building opened and the collection was moved to display cases on [its] first floor," he explained. "Housing also used some of the space as overflow storage."

Problems with the buildings continued over time, including falling concrete from outer walkways, power outages and strong odors.

Housing projects are usually funded by bonds which can span 30-plus years, Hart noted. Ezell and Abernathy were bond funded and the university continued to pay debt service until the buildings were paid off.

Although the buildings were never officially condemned, MTSU determined that the buildings could not be salvaged because renovation expenses were too great. The university earmarked them for demolition in 2013.

Young said the demolition process should be complete by later in March.

Once the demolition is completed, Young and his crew will begin construction of MTSU's new School of Concrete and Construction, for which a groundbreaking ceremony is set for April 6.

Target completion of the 54,000-sq.-ft. building is fall 2022, with a $40.1 million price tag. The facility will include classrooms, faculty and staff offices, and a laboratory.