The new bridge will be a steel open spandrel arch that incorporates the decorative urns and pillars of the original bridge built in the early 1900s. 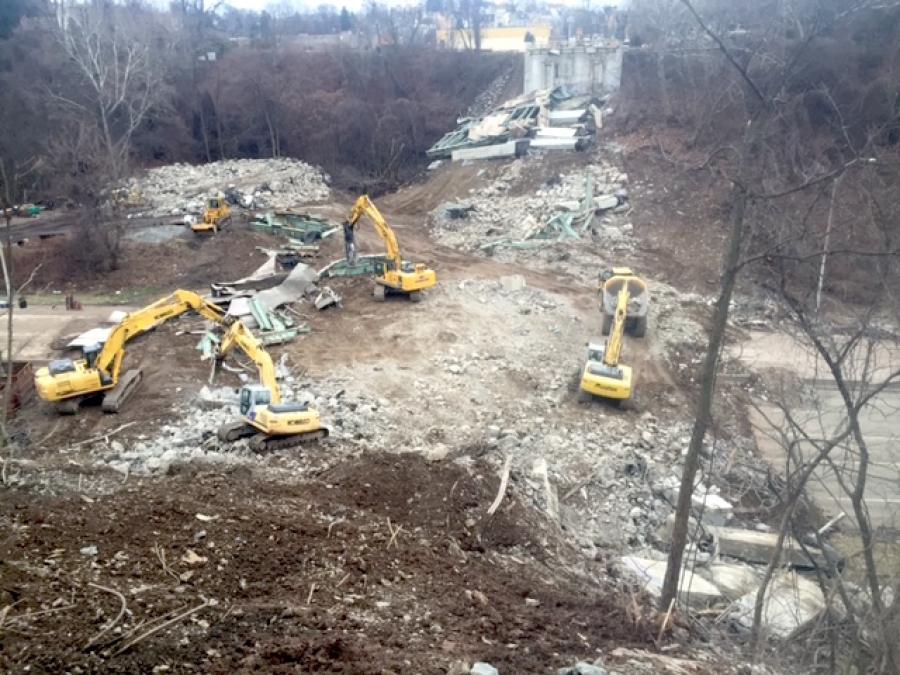 Mosites Construction photo. A tired bridge that stood for nearly a century in Pittsburgh, Pa., was recently put to rest in preparation for a new one.

A tired bridge that stood for nearly a century in Pittsburgh, Pa., was recently put to rest in preparation for a new one. The bridge is located in the Squirrel Hill area of the city spanning I-376 (Parkway East) near Squirrel Hill Tunnels.

Commonly known as the Greenfield Bridge, the formal name is actually the Beechwood Boulevard Bridge, since it serves as the terminus to Beechwood Boulevard, a recreational boulevard designed to connect the city's three major parks: Highland Park, Frick Park, and Schenley Park.

The new bridge will be a steel open spandrel arch that incorporates the decorative urns and pillars of the original bridge built in the early 1900s.

The contract, worth $17.4 million, is federally, state and city funded. It was awarded to Mosites Construction Company, with Derrick Jeannerette and John Gyure as project managers and John Dove as superintendent. Notice to proceed was issued on Sept. 1, 2015, and the completion date is set for Sept. 4, 2017.

The project scope includes the complete removal of the existing concrete bridge and replacement with a new steel arch bridge. The new bridge will consist of two abutments and two thrust blocks with piers built on micropiles. The steel arch bridge will have steel columns, floor beams and stringers, with an eight-inch concrete bridge deck with a sidewalk and barrier on one side and a bike lane and barrier on the other side. The barrier will have a mounted protective fence.

Historic monuments on the existing bridge will be incorporated into the new structure.

According to Jeannerette, one of the major challenges with the project was the implosion of the existing bridge which was executed on Dec. 28, 2015.

“Mosites was given a five-day closure of SR376 in order to move protective material on to SR376, implode the bridge and clean up all of the bridge debris,” he said. “Associated liquidated damages were substantial. This project is also unique due to the bridge implosion, It is the first time in the history of the Parkway East (SR376) that a contractor has been permitted to completely shut down the roadway for any length of time. Mosites was able to close it down for five straight days during the bridge implosion and clean up. The bridge implosion was highly publicized, so Mosites was very involved with the local community leading up to the implosion.”

According to reports, 224 holes were drilled in the arches of the bridge to accommodate 1,400 lbs. (635 kg) of explosives, and the bridge came down in about nine seconds.

Another challenge noted by Jeannerette was the construction of four thrust blocks on a severe slope angle of 38 degrees, making every aspect of construction difficult.

“Due to the large concrete placements, artificial cooling methods will need to be incorporated to ensure the concrete cures without cracking from internal stresses from temperature differences,” he said. “The steel arches will be set during weekend closures of SR376. The anchor bolts for the arch base plates will need to be correct in order for the steel to fit up properly, and there are again substantial liquidated damages should we not complete the work on time.”