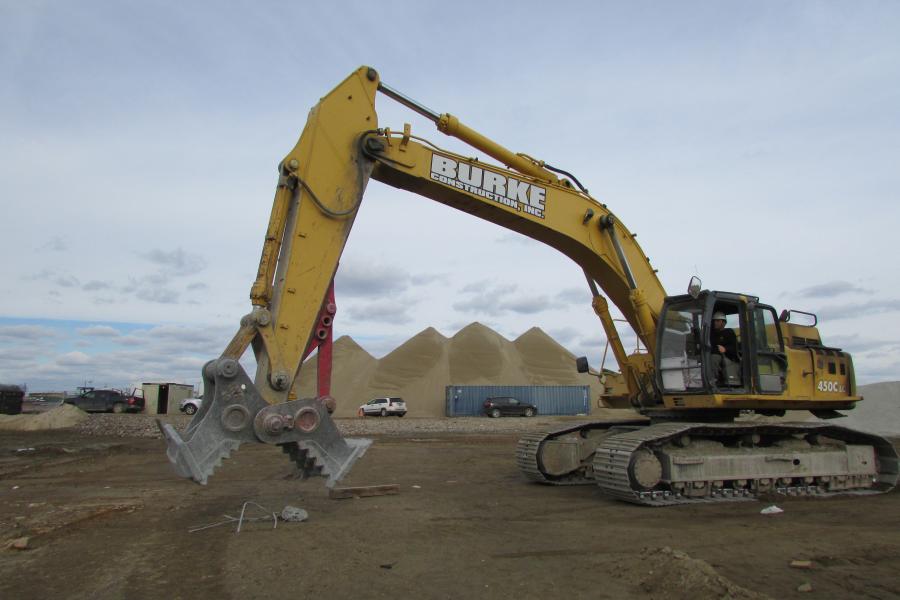 On a redevelopment site in Perth Amboy, N.J., crews are repurposing a piece of history. The job: break down pieces of the old Tappan Zee Bridge to build up a 35-acre site situated on the banks of Arthur Kill, which flows into the Raritan Bay.

The site is located on a flood plain, and before it can be repurposed, it needs to be built up between four and eight feet, said Jason Burke, owner of Burke Construction of Ocean, N.J., who has been contracted to spread imported fill across the property. His crew of 12 will be using "every single piece of concrete" available from the dismantled bridge to make it happen.

For Burke Construction, this project was a bit out of the norm.

"This is definitely a little change in pace," Burke said. "We do a lot of concrete crushing, but this is dismantling and crushing. This is a bit more involved than we generally get, but we are geared up for it. It was just a matter of getting the right attachments."

One key attachment Burke needed to make the job a success was a Nye mechanical pulverizer, the first piece of equipment used in the multi-step process of breaking down the concrete from the bridge. After a bit of searching, Burke found Gabe Guimond, vice president, Demolition Products, at National Attachments of Gorham, Maine, the exclusive Nye Manufacturing distributor in the U.S. National Attachments, which has been in business since 1989, easily provided Burke with the equipment.

According to National Attachments President Scott Guimond, "Nye products are known industry-wide for having a 20,000-hour-plus service life," a valuable assurance when working on a job as large as this one.

The enormous pieces of the Tappan Zee arrive at the site on barges from Tarrytown, N.Y., where a 1,000-ton barge crane picks them off and crews get to work on the concrete with the Nye pulverizer. Then, the concrete is put through a crusher to "crush it down to 6-in.-minus specs so it can be used as stabilizing [material] on the site," said Burke, who noted that the pulverizer does about "90 percent of the work," which makes the job of the crusher "minimal."

According to Burke, breaking apart one of the bridge's precast 50-ft.-long by 13-ft.-wide deck panels, which are lined with I-beams along the bottom and the deck on the top, takes about an hour with four hammers working simultaneously. It might not seem like a lot of time, but Burke said he anticipates about 2,000 of these panels coming in — and once the crew finishes with those, the bridge's columns, struts, fender pieces and concrete-filled steel piles will arrive. In all, Burke said his crew will handle between 150,000 and 200,000 tons of material.

Burke and his crew have been at work on the bridge segments since October 2017, and will likely finish either sometime this summer or in October 2018, depending on the weather.

"Depends on their schedule, bringing in the material," Burke said. "If that river right there doesn't freeze, they are going to keep right on going. If there is a freeze, they won't be able to bring barges from Tarrytown, then the job will shut down and we will wait for the weather."

As they crush and pulverize the concrete, crews also shear and separate the steel and bundle the rebar before sending it to a recycling plant. From there, the scraps could find new purpose in another piece of infrastructure.

"This might get ground down and melted and put in I-beams that build another bridge," Burke said.

Wherever the remaining pieces of the old Tappan Zee end up, the life of the iconic bridge is far from over.