Despite a chilly rain Oct. 29 that forced the groundbreaking ceremonies indoors, more than 200 University of Mississippi supporters and community members were on hand to celebrate the largest ever single construction project on the Oxford campus.

The $175 million Jim and Thomas Duff Center for Science and Technology Innovation is designed to boost science, technology, engineering and mathematics (STEM) education at the venerable state university.

The facility will be home to classrooms and labs for biology, chemistry, computer science, engineering and physics. The 202,000-sq.-ft. building will feature technology-enabled active learning, a 3D visualization lab, and fabrication and testing equipment in addition to traditional lab space.

The facility is named for Jim and Thomas Duff, brothers, and owners of Duff Capital Investors. They have committed $26 million to building the new science center, and, at the groundbreaking, said they are thrilled to see construction beginning on a project they have envisioned for a long time.

"We are excited about today and we look forward to the future," noted Thomas Duff during the ceremony at The Sandy and John Black Pavilion at Ole Miss. "When I was walking through here, looking at how new the Pavilion is, I got to thinking of the hundreds of thousands of students who have walked these roads and gone through the corridors of the buildings whose lives have been changed because of their experience at Ole Miss."

Just across the street from the ceremony, crews from Oxford-based Yates Construction Co. have already begun work at the site, on All-American Drive across from Vaught-Hemingway Stadium.

"We're deeply grateful to Jim and Thomas Duff for their significant investment in our vision to produce graduates who are going to fill critical needs and bring new jobs to the state of Mississippi," Chancellor Glenn Boyce said. "This long-anticipated building will become a fixture of the campus and an unparalleled asset for our students, shaping the next generation of STEM-educated citizens and, of course, maximizing their opportunities."

He added that the new center will not only prepare more students for an increasingly STEM-focused job market, but its interdisciplinary nature will facilitate collaboration as students learn and faculty teach and research across the many disciplines under the STEM umbrella.

"They will build strong relationships and networks like all of us have, that will last a lifetime," Boyce explained. "So, the building of this facility goes way beyond just the facility and just programing, it goes to the heart of who we are at Ole Miss."

Ernest Duff, the late father of Jim and Thomas, was a lifelong supporter of the university and its sports teams. He earned both his undergraduate and law degrees from UM. During his time on campus, he served as student body president, on the Mississippi Law Journal staff and graduated first in his law school class.

He went on to have a successful business and law career, founding Southern Tire Mart, which would lead to the establishment of Duff Capital Investors. The parent company comprises more than 20 companies and employs more than 13,000 people across the country. 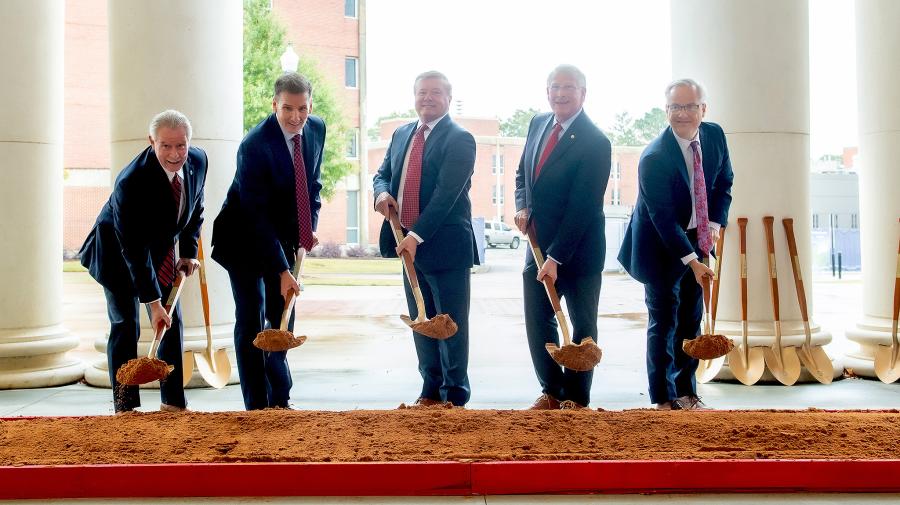 A Local, State and Global Impact

The Duff brothers, who have built their company on innovation and entrepreneurship, said education — especially education of this nature — is personally important to them but also key to growing the state's workforce as the national and global labor markets increase. Thomas Duff pointed out that the number of STEM graduates from Mississippi's public universities is well below the national average.

"We are in a competition with the rest of the world, and this wonderful Duff Center will be part and parcel with our ability to compete effectively and successfully in that arena," added Sen. Roger Wicker, who has worked on legislation in the Senate to increase America's global standing in STEM professions. "In so doing, that means jobs for Americans, that means better technology for Americans, and it means a better national defense for the United States."

Boyce noted in his remarks that he hopes the new facility will help Mississippi and the region to prosper.

"We're going to produce health professionals, engineers, and science and math teachers," he said. "We're going to have an expansion of research and advancement of our teaching mission that's really going to support and reaffirm the R1 status of the university.

"It, absolutely without question, is going to be one of the crown jewels of our university and it will become one of the nation's leading student-centered learning environments for all STEM education."

The Duff brothers are not alone in their monetary contribution toward the building of their namesake education facility.

The $175 million undertaking, which includes $135 million in actual construction costs, has also gotten a commitment of $20 million from Jackson's Gertrude C. Ford Foundation, in addition to another $5 million pledge for the gardens that will surround the Duff Center. The outdoors will include a commemorative area honoring renowned American author and University of Mississippi graduate William Faulkner.

Other support for the center's construction comes from the state of Mississippi and many other alumni and friends of the college. 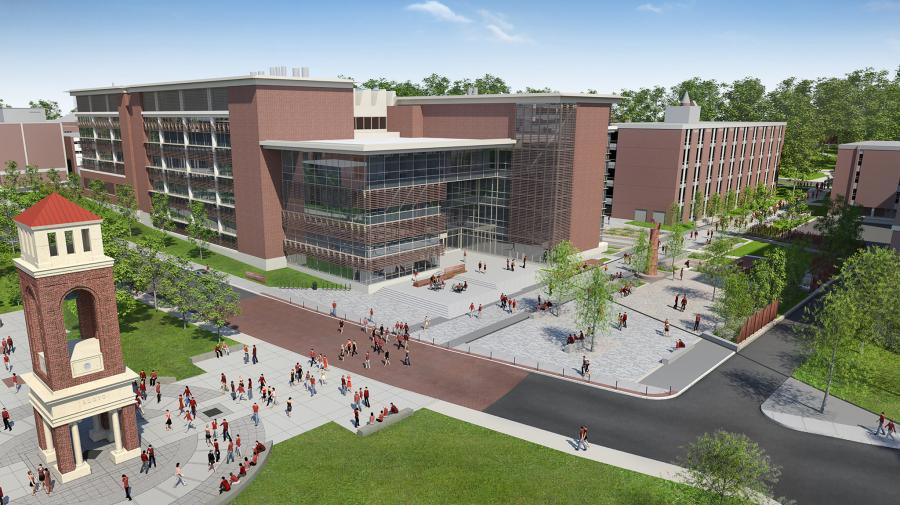 The University of Mississippi hosts the ceremonial groundbreaking for the Jim and Thomas Duff Center for Science and Technology Innovation. The 204,000-sq.-ft. facility is the largest single building project ever on the Oxford campus.