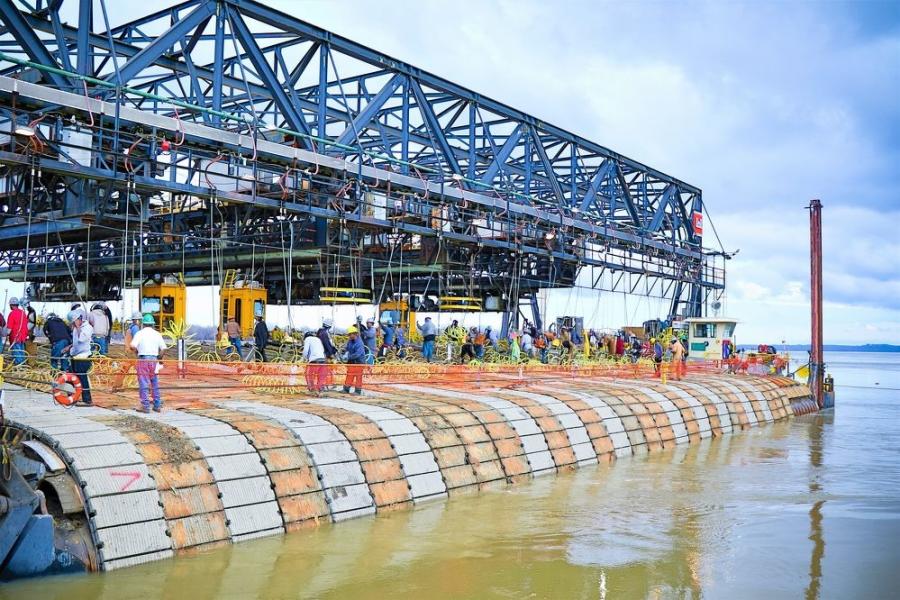 The Mat Sinking Unit sinks articulated concrete squares into the Mississippi River during a recent revetment season. Each year, the unit sinks hundreds of thousands of squares into the river to fortify its banks. (USACE photo)

The lower Mississippi River is a habitual wanderer. With its water flowing into the Gulf of Mexico at a rate of between 200,000 and 700,000 cu. ft. per second, the powerful river constantly erodes its banks. It carved out its present route to the Gulf about a thousand years ago and the U.S. Army Corps of Engineers (USACE) is determined that the meandering river now stay on course.

To retard further erosion, the Corps spends six to seven months each year cladding banks along vulnerable stretches of the lower Mississippi. It utilizes a one-of-a-kind vessel called a mat-sinking unit or MSU to weave together a mattress of concrete blocks, which then is laid along the riverbank and bottom.

The current MSU was launched in 1948 — nearly three quarters of a century ago — and is showing its age. The good news is that the unique floating work platform is on schedule to be replaced by a state-of-the-art vessel.

The Mississippi River flows south for more than 2,300 mi. to reach Gulf waters, draining numerous states between the Rockies and the Appalachian Mountains. The last thousand miles is mostly where the action is for USACE personnel because, unlike upper regions, the lower Mississippi contains no locks or dams. It is uncontrolled flow to the sea. 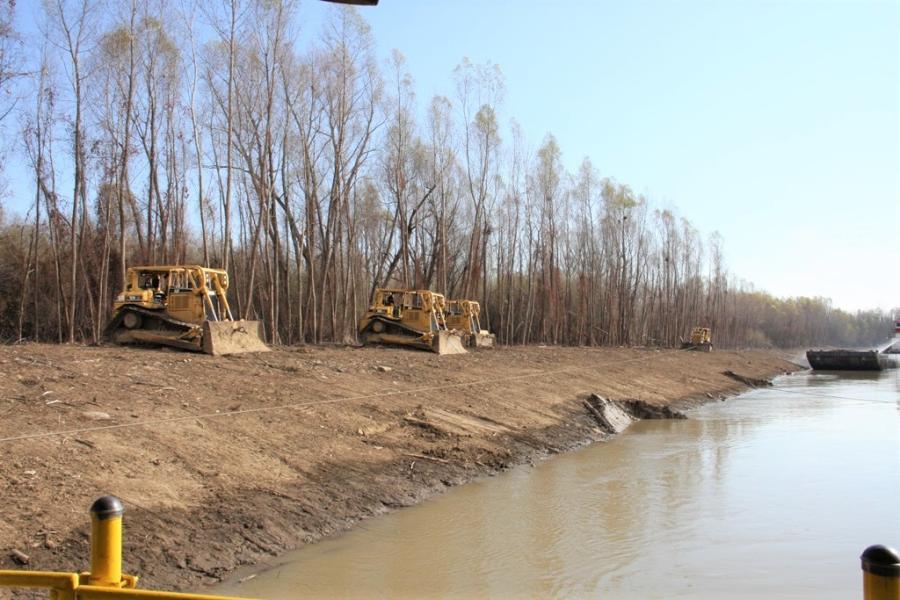 "The lower Mississippi is our workplace" is how Barry Sullivan characterized it.

Sullivan is chief of the mat-sinking unit, which works out of the Corps' Vicksburg District office. The MSU work is part of the engineers' ongoing effort to protect some 460 mi. of levees within the district and ensure the waterway remains navigable for river traffic.

The work is seasonal and the length of the season can vary. Generally, it starts in August and runs through February. In 10-hour days during that period, the vessel's crew works from a deck on which are neatly laid out concrete pavers 3 in. thick, 15 in. long and 4 ft. wide. Early on, the size of the paver was settled upon as the most durable and easily handled. Its composition has evolved only slightly through the years.

Sixteen of the tiles are pneumatically stitched together using copper-coated stainless-steel wire to form a "square" of tiles 4 ft. wide and 25 ft. long. They are joined loosely so that they can closely follow the contour of the river bottom. Thirty-five of those squares are laid side by side on the broad deck and wired together to form a 140-ft.-wide flexible mattress of concrete tiles.

When completed, the front end of the mattress is deployed over the side, settling onto the river's sloping shore and slippery bottom. Through a succession of these launches, a completed single mattress can stretch out into the river for 900 ft.

According to Sullivan, workplace hazards for Corps employees on the working boat are about the same as for other construction projects. The hazards include moving heavy machinery and the fact that "the surface the workers are standing on is moving off into the river. It requires a fairly high level of situational awareness." Even so, the unit has a "very good" safety record, said the chief, who began work with the Corps of Engineers 30 years ago and has been in charge of the MSU since 2015.

This mat-sinking process is not self-contained. The MSU functions as the final assembly center and the launching vessel for the mattress, but it does not fabricate the concrete pavers. Rather, the pavers are cast at river-side plants in relative proximity to where the boat is operating — specifically, in Memphis, Tenn., St. Francisville, La., and Vicksburg.

At the plants, the concrete tiles are joined to form the 4-ft.-by-25-ft. squares. The squares then are loaded onto barges and convoyed to the floating MSU for assembly and sinking. Each supply barge holds 585 squares, which is about 950 tons of concrete. When a barge arrives, it is tied up to the MSU and the building blocks are unloaded for real-time utilization. The empty barge then is returned to the plant for another load as a full barge takes its place. Most days on the river, five barge-loads of the concrete squares are off-loaded, joined and sunk.

To help the operating MSU stay in position while riding the current, a 400-ft.-long barge is moored on the vessel's downstream side, perpendicular to the riverbank. The MSU floats out into the river alongside the barge with the mat trailing out behind it and disappearing into the water.

To stabilize this entire floating complex of working and moored craft, the MSU crew relies on cables running to several Caterpillar D6 and D7 dozers stationed ashore. Another set of cables connect the mat to other dozers so that, as the matboat moves out into the waterway, the mat is pulled from the deck and into the river waters. After a 900-ft.-long mat is completely deployed, the moored barge, MSU and onshore dozers are floated downstream and the mat-sinking process begins anew.

Sullivan said when the process is working smoothly, about 25 ft. of mat is deployed every five minutes.

"Sometimes that can stretch up to 10 minutes. For example, one of our gantry cranes isn't working right now, so we're doing the work with three cranes. There are a lot of variables like that to slow us down, but on a good day, we have five-minute launches."

The designed life of the mat is 50 years.

"We have some that are older than that and still are in place," said Sullivan. "But we also have some mats that were a lot younger and are gone. The river said, ‘You're not going to stay here!' and ripped them out."

When the river wins, the MSU eventually returns to the scene and overlays a new mattress on the remnants of the old one.

Erosion-fighting mats can last a lot longer than 50 years, as Sullivan recently was reminded. He was shown a sonar picture of a stretch of river bottom. The photo displayed a mat of bound willow trees that 19th-century engineers placed for the same reason Sullivan is laying concrete mats there today.

A next-generation mat-sinking unit is in the works and will be christened "Armor 1" — mat-sinking is equated with "armoring" the bottom and banks of the river. The new vessel will be bigger, more robotic and far more productive than the current boat. 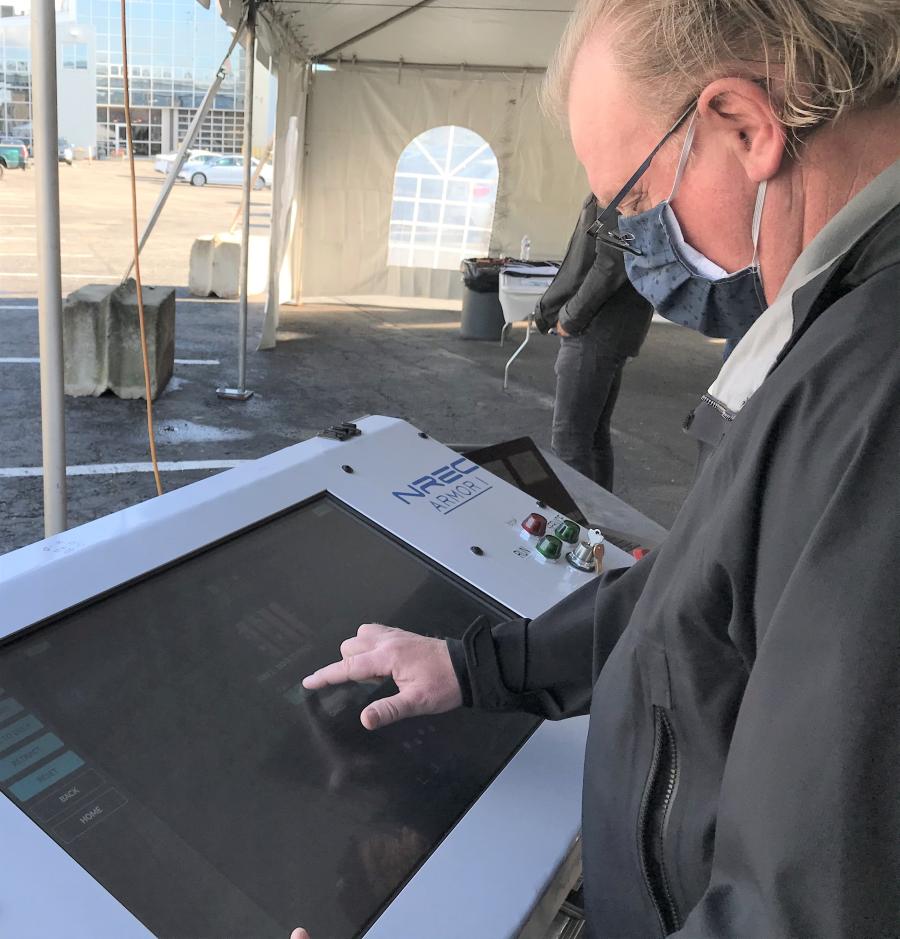 According to chief project manager John Cross, Armor 1 will be the same height and width as the current vessel — 40 ft. and 75 ft., respectively — but at 212 ft. will be 36 ft. longer. The extra length is designed to stabilize the craft in faster water and create a better working area on deck.

Safety and reliability were key design parameters for Armor 1, Cross said. The vessel will incorporate modern safety features and comply with all safety regulations promulgated since the 1940s when the predecessor craft was constructed. It will be double-hulled, for example.

It also will be of modular design so that parts and systems can be easily procured and the vessel reliably maintained. By comparison, the gantry of cranes on the current vessel, which unload the mat squares and position them on the deck, were last refurbished in the 1970s. Because OEM crane parts are not available, Corps machinists routinely fabricate replacements.

"The other thing we focused on in designing Armor 1 was increasing our efficiency," said Cross, who is a Corps of Engineers retired colonel who came out of retirement to help get the project rolling. "Today, on a really good day on the river, they can sink about 2,000 squares. Our goal was to double that."

Not only can more mats be sunk in a season, the bigger and better boat will be able to finish a job faster and get out of the way of commercial river traffic.

"The Mississippi is a very, very busy waterway," he said. "Sometimes we have to close the channel to barge traffic for up to 12 hours. It's like working on a highway. You don't want to clog up the road with construction work."

New technologies will help speed the mat-sinking. Stitching the squares together on deck to form a complete mattress now is a manual process. Armor 1 will replace most of the manpower with pneumatic robotics. The gantry of overhead cranes that work in tandem to handle the mattress squares also are operated manually today and will become robotic. A design team at Carnegie Mellon University National Research Engineering Center in Pittsburgh, Pa., devoted several years to developing the Armor 1 robotic system.

These and other technological advancements will reduce the number of crew members from the current complement of 225.

"But there still will be plenty of people on the river," Cross said. "The MSU doesn't work by itself. There will be a lot of humans still involved. It's like in a modern factory. Someone is not putting on each lug nut in an assembly, but someone is monitoring the station and making sure the robot is getting it done right." 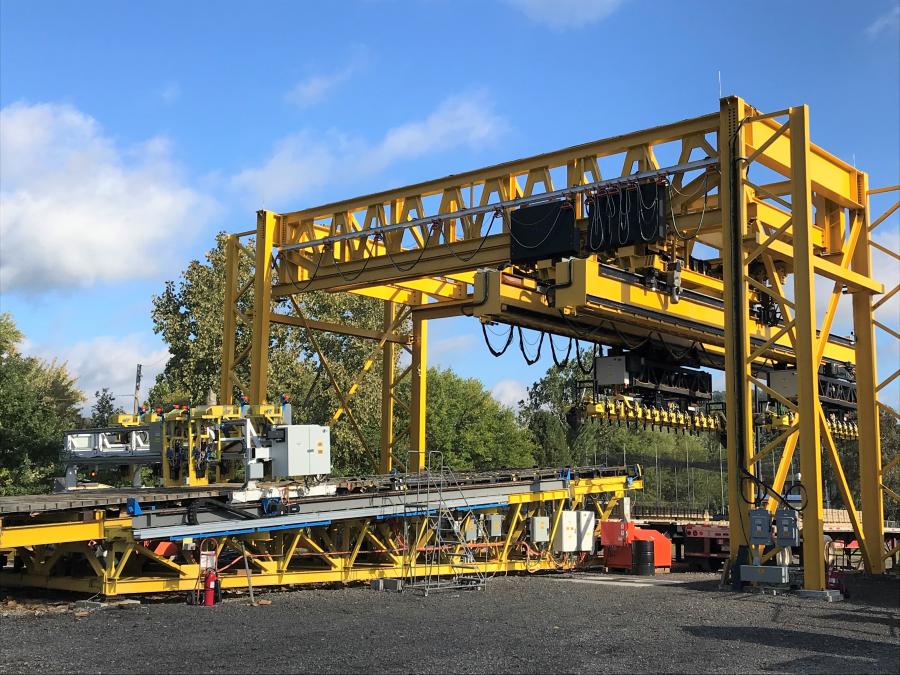 Crew members on the new vessel will be a mix of new and veteran workers. Some will have to learn a new skill, some not. Hinds Community College in Vicksburg is working with the Corps to develop a training curriculum for Armor 1 crew members.

The vessel is under construction at the Thoma-Sea shipbuilding facility in Lockport, La. It is on schedule to be launched in December 2022 and to be utilized on the Mississippi River in the 2023 working season. The entire cost of the project, including development and construction of a prototype, is $125 million.

The land-based prototype already is being tested in Pennsylvania. Last September, the full-scale model began to validate the worth of Carnegie Mellon's robotic systems. The robot on the prototype is the largest ever constructed by the university. Performance testing will continue in Pennsylvania for the next two years.

And so, the revetment work continues. Year after year, the USACE labors to keep the Mississippi River in its banks and out of neighboring fields and communities. Engineers monitor the erosion of the river's edges and the aggregation of sediment in river channels and respond with riprap and mat-sinking as well as an auxiliary activity, dredging.

Mat-sinking is weather sensitive, of course. Sub-freezing temperatures halt the work because ice is a complicating factor in deck and supply work. Thunderstorms also can interrupt the process via wind-whipped waters. But Sullivan said the most dangerous meteorological danger is lightning. The MSU is equipped with lightning sensors that warn of approaching electrical fields.

The biggest impediment to work during the 2020-21 season was the COVID virus. Normally, crews work 12-day shifts, sleeping in a dormitory situated on a moored barge. When the virus struck, Sullivan instituted 25-day work schedules to help isolate crews from the pandemic. Travel home for their days off is in 15-passenger vans to minimize interaction with the public.

"It seems to have worked," the chief said shortly before the season ended March 4. "We had a small outbreak early, but we did not have to shut down. I would hope next season we can get back to some semblance of normalcy. At least I hope 25-day shifts are not the new normal." CEG