The project is called a "game changer" for many reasons. 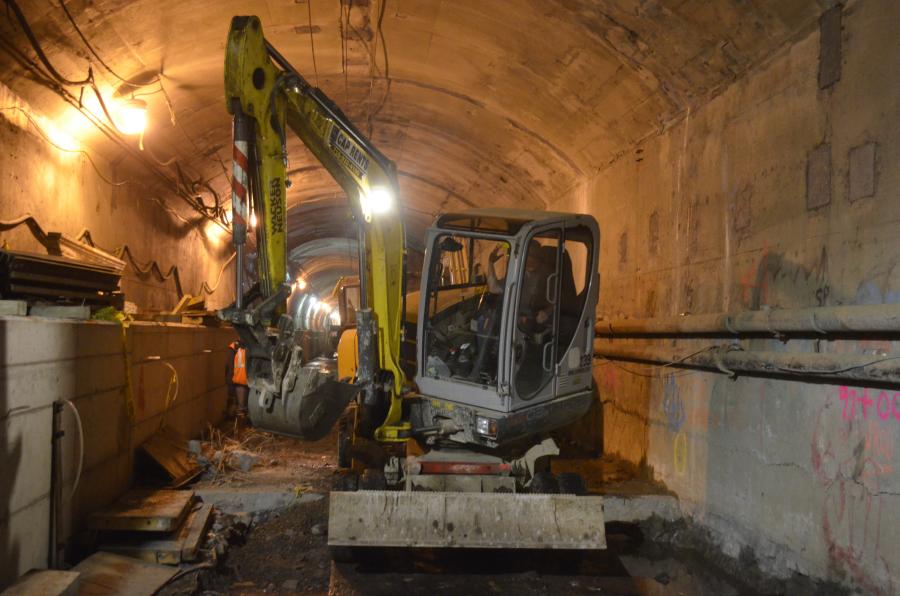 The Wacker Neuson 6503 wheeled excavator cleans up a milled area of the tunnel floor. Due to its unique size and maneuverability, the cab is able to spin 360 degrees — without making contact with the tunnel wall — and head back down the tunnel in the opposite direction.

The Metropolitan Transportation Authority (MTA) in New York is working on one of the largest public works projects currently under way in the United States. The project's purpose is to bring the Long Island Rail Road into a new terminal and concourse on the East Side, which is being constructed below and connected to Grand Central Terminal.

Named the East Side Access Project, it will route the Long Island Rail Road from its main line through New York connections in Sunnyside Yard and through the lower level of the existing 63rd Street Tunnel under the East River. In Manhattan a new tunnel was mined beginning at the western end of the 63rd Street Tunnel at Second Avenue curving south under Park Avenue and entering a new eight-track Long Island Rail Road terminal beneath Grand Central.

The new terminal at Grand Central is being constructed 14 stories below ground and features four platforms, eight tracks and a new 350,000-sq.-ft. passenger concourse with approximately 25,000 sq. ft. of retail, which is under construction closer to the surface approximately 50 feet below street level in a part of the Lower Level MNR train yard, formerly known as Madison Yard. The concourse and terminal will be accessed via stairwells, 22 elevators, and 47 escalators. One of the entrances will connect the new concourse to the existing Lower Level Dining Concourse at Grand Central , in comparison to the 19 escalators in the remainder of the LIRR system. The MTA is planning and building additional entrances at 45th, 46th, and 48th streets. The escalators in the four wellways from the concourse to the two train terminals are approximately 180 ft. (55 m) long and descend more than 90 ft. (27 m). The escalators and elevators are to be operated and maintained by the firm, which was also responsible for designing, fabricating and installing them under a contract with the MTA, one of the only such instances in the entire MTA system, according to the MTA.

The new concourse will have more floor space than the New Orleans Superdome.

This project will be a game changer for New Yorkers, providing rail service to the east side of Manhattan and relieving congestion at Penn Station. It will serve approximately 162,000 passengers traveling back and forth from Long Island and Queens to Manhattan. The revised budget for the East Side Access project is $10.178 billion; service is scheduled to begin in December 2022.

Frontier-Kemper Constructors Inc., New Rochelle, N.Y., is one contractor working on the project, which traces its origins back to the late 1960s when MTA Chairman Ronan provided the MTA's first masterplan to Gov. Rockefeller, which included the first vision of LIRR access to the East Side. Frontier-Kemper is currently performing a $300-million-dollar contract that is expected to be completed next summer.

One crucial piece of the project according to Bill Vollmer, general superintendent for Frontier-Kemper, is the rehabilitation and modernization work in the lower two tunnels of the existing 63rd Street Tunnel.

“The tunnel was initially constructed in the early 1970s and the walls and ceiling in this area are squared off,” he said. “You will know that you have entered the new area of tunnel construction when the walls and arch become rounded.

“The work area is extremely compact and the Wacker Neuson compact excavator is ideally sized for the tight quarters and can execute turns that were previously impossible.”

Frontier-Kemper's work includes coming in after the boring machines have made the initial excavation; waterproofing the walls and ceiling and then placing a concrete lining and installing conduits within a cast-in-place concrete duct bench.

A Wacker Neuson 6503 rubber-tired excavator is being used to load, unload and move materials, which is critical to the process, according to Vollmer. In addition, it is used for carrying forms and demolishing (breaking out) concrete.

This unit is one of the strongest machines in its weight class and actually performs more like a machine in the next size weight class, according to the manufacturer.

“We have two larger excavators that we are using for concrete demolition and excavation that we have on rent from CAP Equipment [New York City's authorized Wacker Neuson dealer], but these machines do not give us the maneuverability that we get from the Wacker Neuson machine. To make matters worse, there are rail tracks that have been laid down the center of the tunnel so our operators not only have to deal with confined spaces, but maneuvering the machine back and forth across rail tracks with nearly every move makes it a bigger challenge.”

Previous to the tunnel project neither Vollmer nor Frontier-Kemper had any experience with Wacker Neuson.

“We did research coming into the job knowing what our challenges would be and the Wacker Neuson had a nearly perfect spec for our unique set of challenges. We do have other brands of equipment in the tunnel, some of which can give us the reach that we need, but none that give us the maneuverability and the reach that we get from the Wacker Neuson.

“We thoroughly investigate the capacities of equipment before we put it on the job. In this case we also worked closely with Vincent Caporaso [CAP Equipment vice president] to match up the exact models from Wacker Neuson to achieve our objectives.”

Frontier-Kemper handles a lot of its own service and maintenance on the machines whenever possible and has several mechanics on staff. “It is way too costly to try to bring a machine up out of the tunnel unless it is absolutely necessary. About the only time we get involved in bringing the dealer or the manufacturer into the tunnel to look at an issue is if it is a computer or electronic issue that requires specific diagnostic tools. So, simplicity of repair and maintenance and machine reliability are critical.”

Operator Brian Trainor has been very pleased with the Wacker Neuson 5055 all-wheel steer loader he has been using. The 5055, which features a long wheelbase for smooth driving and easy handling even across the roughest terrain, has counterweights located far behind the rear axle for higher payloads and more stability. Its all-wheel steer and rigid frame provide enhanced maneuverability and constant payload stability even when turning, according to the manufacturer.

“The machine I'm operating has 3,200 hours on it and it's important to note that these are 3,200 tunnel hours; some of the most severe applications imaginable. With the severity of the work across the railroad tracks all day there have been times when the machine has needed repairs, but all of these have been very easy to execute,” Trainor said.

The Wacker Neuson 550 all-wheel steer loader is performing beyond expectations, too, according to operator Terrance McPartland.

“My Wacker 550 loader has been in the tunnel its entire life and now has 5,400 hours on it. It has been put up to the challenge in every conceivable manner. It is a short machine with all-wheel steering. It's ideal for what we are doing. It's still operating like a dream.”

Vollmer added, “The Wacker Neuson machines have been used in some of the most severe operating conditions with zero catastrophic failures and we cannot say that about the other pieces of equipment that have been brought into the tunnel.”

What made these Wacker Neuson machines ideal for Frontier-Kemper's application was their width, height, capabilities and maneuverability.

“[The Wacker Neuson 5055] has a very strong power to size ratio,” said Rick Stewart, an operator with Frontier-Kemper. “It's compact, it's powerful and it's stable, allowing it to do some very heavy picks in some very tight circumstances.”

Every piece of material — aggregate or otherwise — that is used in the tunnel has to be lowered down; in the case of the aggregate, typically in large bags. The bags must then be loaded onto train cars and transported by rail to the area where the materials will be used, and the stockpiling of material and debris further reduces the maneuverability within the tunnel.

“We would not be able to maneuver any machine on tracks up and down the tunnel and across the rail tracks,” Stewart said. “It is a very capable machine in this application. I've done a lot of excavating with this machine and the breakout force is very strong.”

The Wacker Neusons are used to load each train car with the material that is transported through the tunnel and the same process applies in reverse. All of the material that is created and waste that is created by the excavation work — approximately 25 to 30 cu. yds. (19 to 23 cu m) of debris each day — has to be loaded by the Wacker Neuson machines onto the train cars to be taken back up top. Everything comes in and out through the same entrance, according to Stewart.

At the tunnel entrance, everything is loaded on and off the train cars via a crawler crane located on the surface.

Frontier-Kemper and CAP Equipment have a history that goes back a quarter of a century.

“We have had a long-term working relationship with CAP Equipment that goes back nearly 25 years. Frontier-Kemper has been doing business with CAP Equipment since 1994. Frontier-Kemper Constructors Northeast Division manages heavy and underground construction projects in the New York geographical area and continuously has large public works projects of some sort going on in the city” Vollmer said.

“As far as parts availability CAP Equipment has always had what we need readily available to keep going. Whenever we have equipment needs of any kind, whether it be Wacker Neuson or other machines, one phone call to CAP Equipment and our needs are met.”