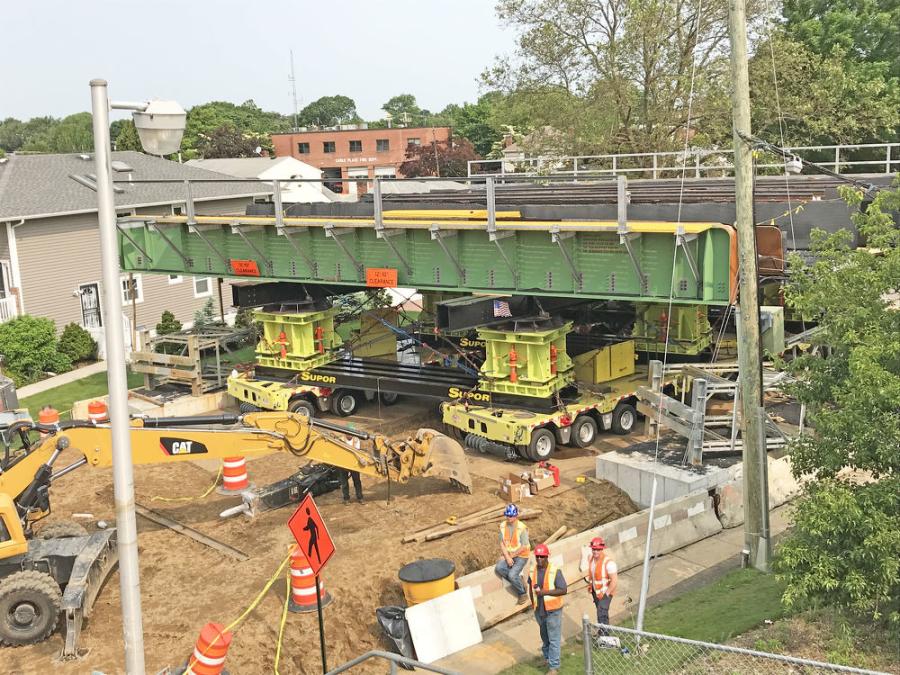 One of the largest and busiest commuter rail corridors in the nation is undergoing a dramatic transformation. 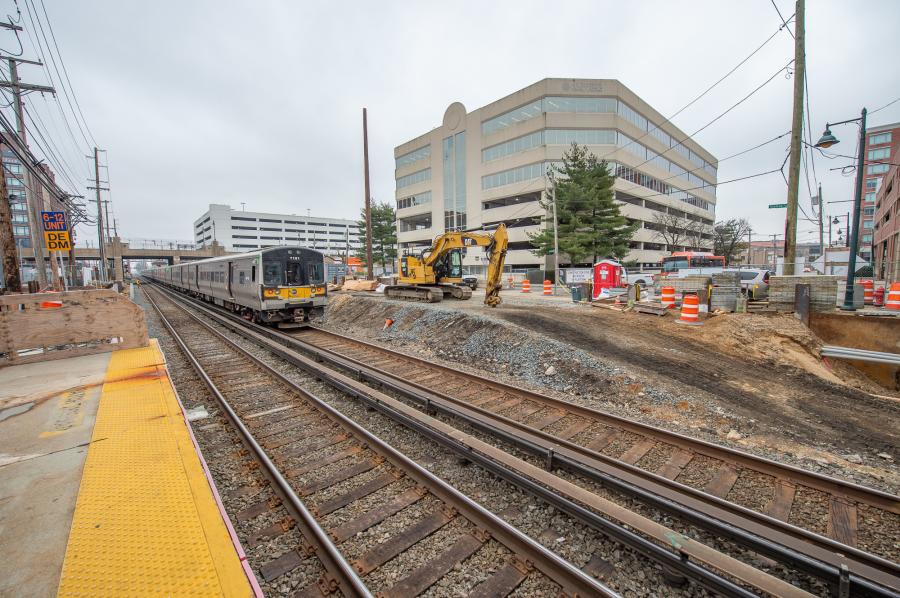 Substantial construction began in late 2018. The project, more than halfway completed, is on budget and on time, despite the challenges caused by COVID-19. McGuinness noted that a previous version of the project was first proposed more than a half-century ago.

In its current iteration, Gov. Andrew Cuomo became personally involved and eliminated the taking of any residential property. Hundreds of meetings were held with village, town and Nassau County government officials, as well as all the elected officials representing residents along the approximately 10-mi. corridor. An unprecedented community outreach program was put into place with community ambassadors for each locality. A 24/7 hotline was established, as was an outreach e-mail address.

The contract is structured so there are no interruptions to rail service during typical commuting hours. Work requiring access to the rails is completed under flagger protection and single track outages during non-peak hours. On certain, limited weekends, the Main Line needs to be taken out of service for major activities, including bridge replacements and the pushing in of new underpass structures. Service outages also are necessary for work on interlockings and tracks.

McGuinness acknowledged that keeping things on schedule can be difficult, especially during the pandemic. 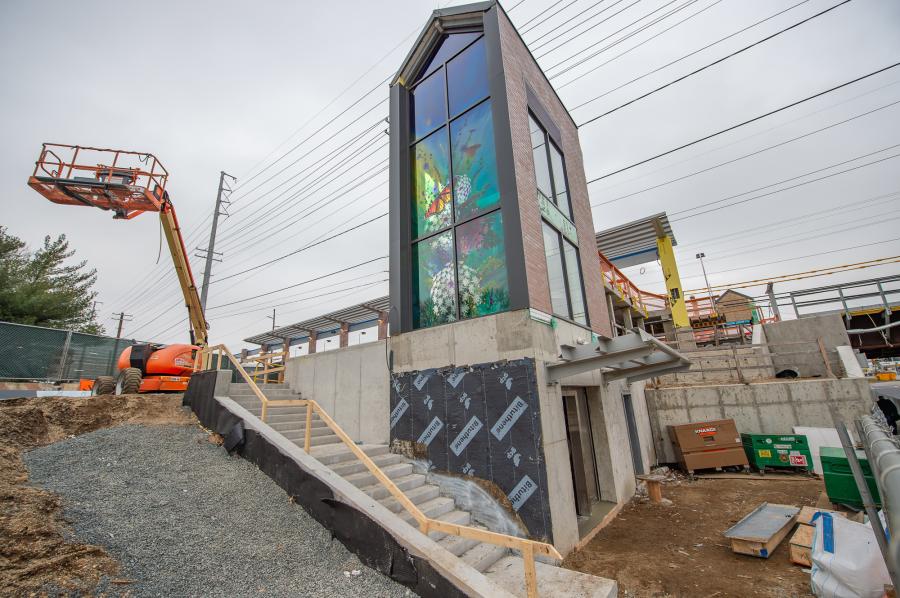 "Another challenge is the fact that the project covers an approximately 10-mile corridor, making it difficult to manage all the work sites that are active at one time. This work is along one of the busiest commuter railroads in North America. The right-of-way is only 66 feet wide, and on average, there are 15 trains passing through the work site every hour. We have to juggle reconstructing LIRR stations and operating systems, while maintaining and minimizing impacts to LIRR operations.

"Additionally, the project is in very populated residential areas, as well as business districts that span four incorporated villages, three towns and the county. Keeping them all informed and incorporating their feedback is an enormous undertaking. And that doesn't even take into account all the individual residents and businesses we are in contact with on a daily basis."

To date, more than 50,000 linear ft. of sound and retaining walls have been constructed. Small segments of third track have been installed, so that temporary platforms can be constructed until the third track is put in service. Most of the new third track will be installed in 2021.

As part of the work, five stations will be reconstructed. To maintain service at each station, work must be done in phases. The portion of the station open to the public is reduced to 50 percent. This also requires installation of temporary services.

The closed portion of the station is completely demolished, then the structure, including foundations, platforms and canopies, is constructed. Permanent access is provided via newly constructed stairs and ramps. Most stations include pedestrian bridges spanning over the railroad. Installation of lighting, digital signage, shelters, benches and security systems also is required, along with art glass and decorative railings.

For both the bridge replacements, as well as the under grade crossings, the new bridge structure is constructed offline. 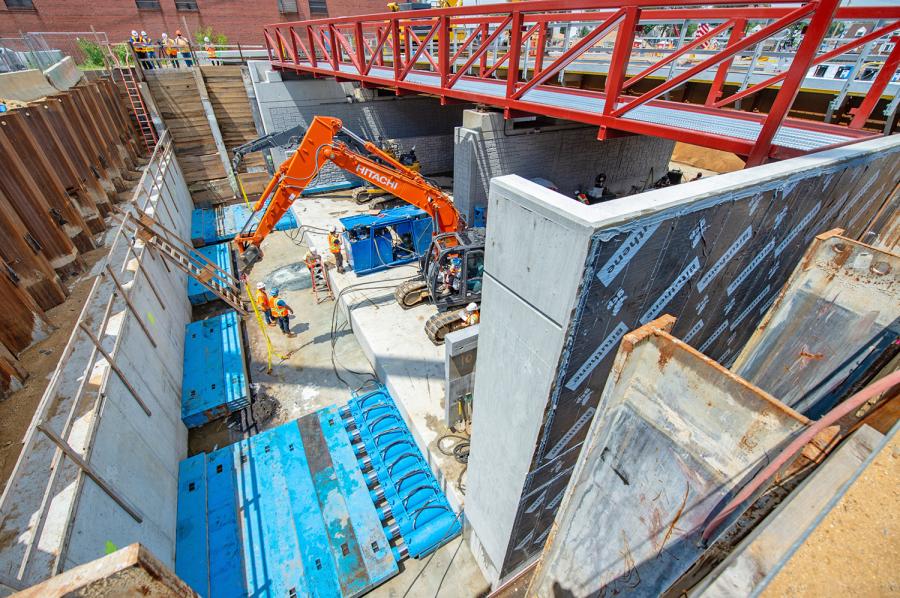 "The challenge is the installation or ‘push' of the bridge into its final position," said McGuinness. "This work must be completed in a single 48-hour double track outage. During this 48-hour period, the existing LIRR tracks and systems must be removed, the new structure positioned into place, and systems, such as third rail power, communications and signal, must be restored. The new track must be installed and profiled to permit maximum allowable speeds 80 miles per hour. While this is taking place, the new structure is surveyed and inspected, as it will be placed into service in time for the Monday morning rush hour."

Rebuilding so many bridges is a major undertaking for crews.

"It requires extensive planning and assessment of risks," said McGuinness. "An integrated schedule is developed that breaks each activity into quantifiable 15-minute increments. This schedule includes plans for staging of equipment and material. Meetings are held on site to monitor progress and identify mitigations to potential issues, as well as opportunities to advance the schedule.

"Following utility relocation, excavation support work and abutment reconstruction, early Saturday morning the existing bridge is demolished and carted away and a new bridge installed during a weekend Main Line service outage. The new bridge, which is built on site, will be lifted by specialized heavy-duty equipment, rolled into place and set. LIRR workers then finalize the installation by connecting rail, power, communications and other systems to have the Main Line ready for service during the Monday morning peak commute."

According to the official website, the project has incorporated a revolutionary technique known as box-jacking, which reduces the length of time the tracks must be taken out of service. Using this approach, workers build a multi-ton concrete structure onsite, using powerful hydraulic jacks to inch the structure into place over the course of one weekend. Box-jacking allows crews to complete complex jobs faster and easier, with workers able to install railroad bridges over new underpasses in single weekends, minimizing interruptions to hundreds of thousands of riders. 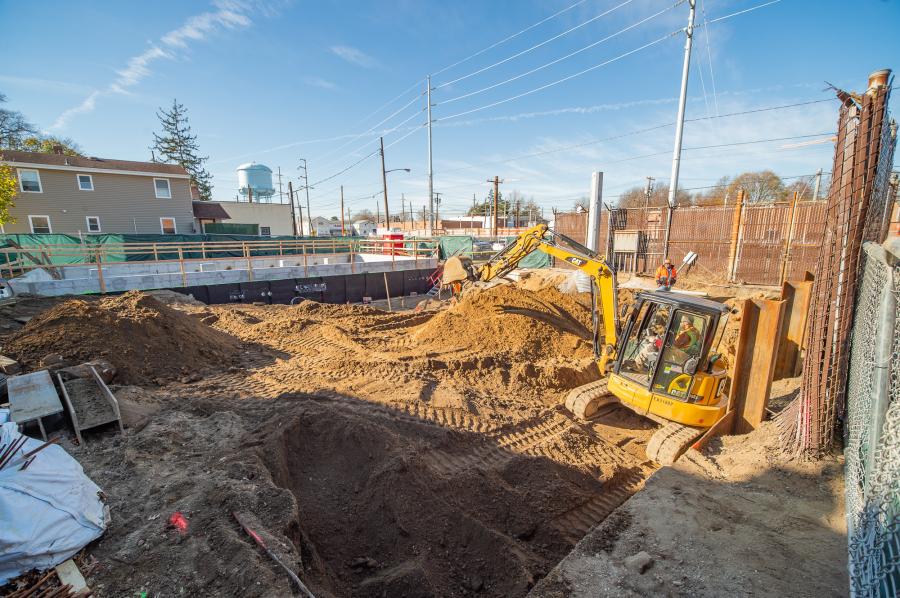 As for the condition of the site before work began, said McGuinness, "This is a typical on-grade railroad section. For the most part, the right-of-way [ROW] is 66 feet wide, with fencing separating the ROW from adjacent properties. Prior to construction, there were numerous overhead utilities that presented conflicts with construction, as well as vegetation overgrowth along the ROW fence. As noted, there are numerous sites along the corridor, and conditions before work began varied from site to site."

Prep work in early stages of construction included clearing and grubbing of vegetation, relocation of conflicting existing utilities, installation of access roads and gates onto the LIRR ROW, and soil sampling and testing to support design. In the areas of the grade crossing eliminations, existing underground utilities in the local streets, such as water, sewer and electric, also required relocation.

"The subsurface materials encountered are very consistent and are primarily sand," said McGuinness. "Groundwater has only been encountered in the drilling of isolated deep soldier piles. No rock has been encountered. This condition was beneficial in the construction of the new under grade crossings.

"During the 48 weekend operations, over 2,500 cubic yards of material was required to be excavated. Having consistent soil material simplified this operation, and reduced risks of delays. With the exception of the under grade crossing sites, excavation is limited to trenching for utilities, site grading and drilling for soldier piles and station footings. Each under grade crossing requires over 2,500 cubic yards of excavation, for an estimated total of 18,000 cubic yards."

McGuinness said the elements have been a concern for the construction team.

"Weather, especially snow and wind, has an effect on the project. The previous two winters were mild, but this year, not so much. Contingency is built into the project for adverse weather and other issues."

To achieve a successful outcome, attention to detail is crucial.

"Every component of the job takes time, from securing financing, to design, to construction and community outreach. The reconstruction of the stations will probably be the most time-consuming element of the project. This is due to the fact that the work must be completed in phases, while maintaining access to the open portion of the station at all times." 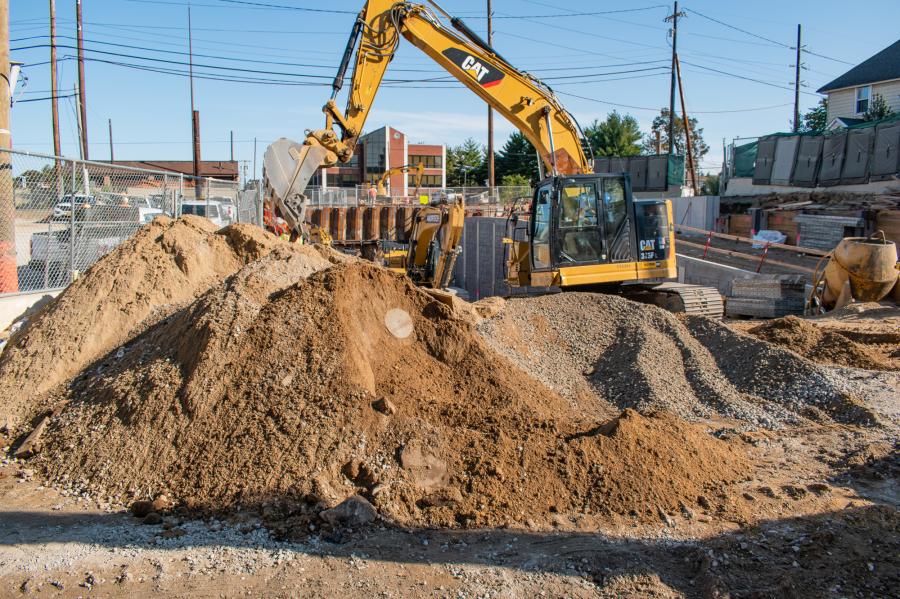 Despite the long hours for crews and inconvenience for commuters, McGuinness said the project will pay off in the end.

"For LIRR customers, reliability will be significantly increased, as the third track makes it possible to more easily reroute around disabled trains. New bridges with an increased height of 14 feet will virtually eliminate bridge strikes. When trucks hit a low bridge, the tracks need to be taken out of service until crews can confirm its structural integrity, resulting in train delays. Elimination of eight grade crossings, most with under grade crossings, eliminates the possibility of train-vehicle collisions, which also necessitates the track be taken out of service."

The project allows an increase in service capacity by nearly 50 percent. In addition, those using the stations along the project corridor will enjoy full ADA accessibility, with new elevators and ramps, digital signage, WiFi service, charging stations, canopies to protect riders from the elements, street furniture and bike racks. Communities will benefit from enhanced landscaping, as well.

All work is expected to be completed by late 2022. CEG