One state DOT says it will cost almost a half a million dollars to jack up a crossing 6 inches. 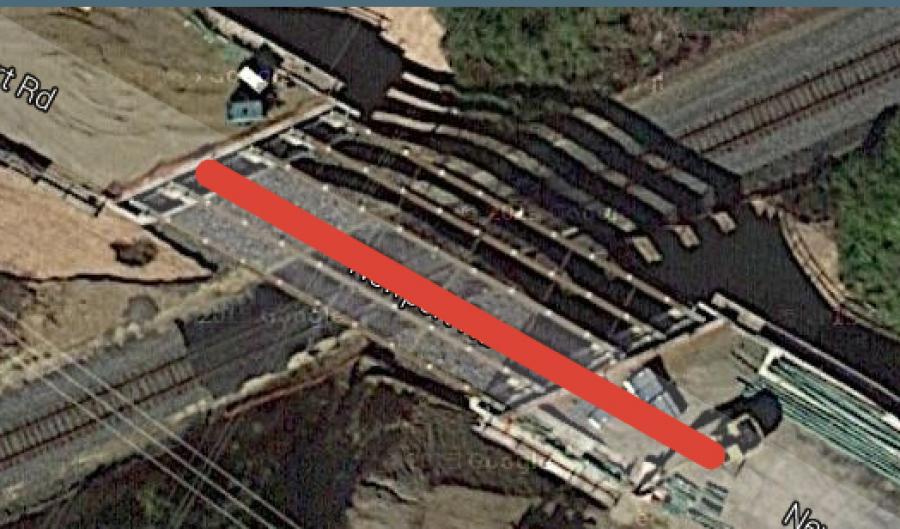 Image Courtesy of Google Earth.The website Delaware Online is reporting that in 2011, the Delaware Department of Transportation spent more than $5 million to rebuild a bridge overpass near Newport to accommodate taller freight trains.

The website Delaware Online is reporting that in 2011, the Delaware Department of Transportation spent more than $5 million to rebuild a bridge overpass near Newport to accommodate taller freight trains.

But soon after the project was completed, the agency discovered that it hadn't been built quite high enough.

The most likely cause, said Barry Benton, Delaware Department of Transportation's state bridge engineer, was a DelDOT surveying team that had mistakenly measured the clearance for the span from the ground rather than from the top of the tracks' steel rails.

“It appears that the original survey shots may not have been top of the rail; they may have been bottom of the rail,” Benton said. “When we fill out a survey request, we request top of rail, and that's what we thought we got.”

As a result, the price tag of the 4-year-old Newport Road bridge will jump by nearly half a million dollars this summer as construction crews jack up the span 6 inches to fix the previous mistake.

The error was discovered in 2012, shortly after the bridge construction was completed. Following the discovery, DelDOT requested a waiver from CSX to keep the bridge at the height of its construction. CSX officials declined the request.

CSX Corp. owns the tracks and has been trying to switch to trains that carry two stacked containers on each car. Those trains need at least 21 feet 6 inches of clearance. When the span on Newport Road near Delcastle Technical High School was completed, it was a few inches too low, Benton said.

The DelDOT workers who surveyed the bridge site are no longer employed at the agency, Benton said. They left because of normal turnover and before agency officials learned of the mistake, he said.

Benton declined to comment whether a surveyor would be fired for committing such an error.

The 2011 bridge project came at a total cost to taxpayers of $5.017 million, more than double the amount of the construction contractor's winning bid. When reached by phone, an official from the winning construction company, Richard E Pierson Construction, declined to comment.

There was “a lost opportunity to recognize [the error] during construction,” Benton said. The construction team might have measured the span's height after its steel skeleton was in place, he said, failing to realize that the structure will settle a few inches after the roadway is placed upon it.

The fault, however, lies squarely with the surveyors, Benton said, and not with crews from Richard E Pierson Construction.

Benton stressed that he is speculating on the cause as DelDOT has not made a definitive determination.

Nevertheless, the result is the same – one bridge too low.