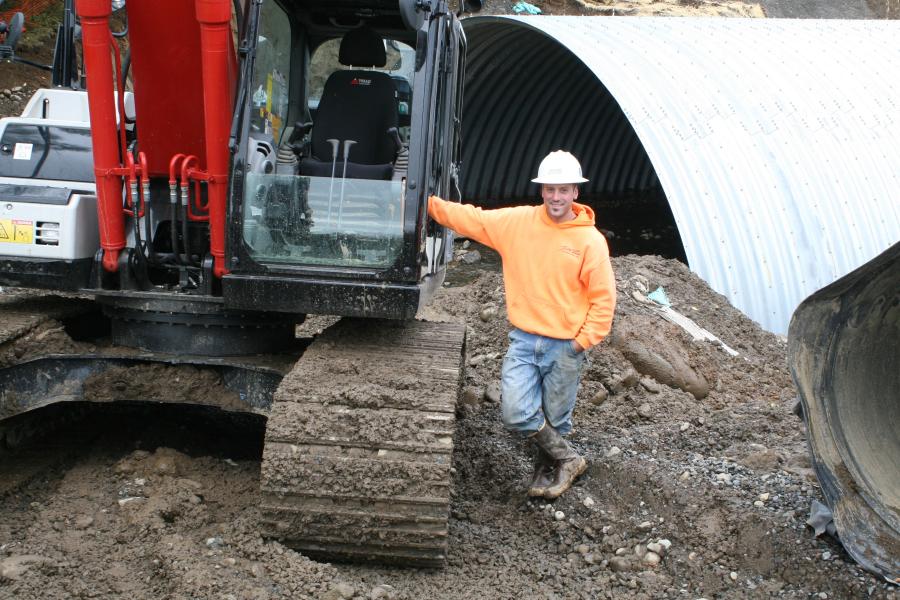 Thompson Brothers Excavating relies heavily upon the most recent addition to its excavator fleet, a Link-Belt 245 X4.

If one were to see Thompson Brothers Excavating Inc.'s (TBE) current job site in The Dalles, Ore., “limited access” might be the last thing that comes to mind. Sweeping hillsides abutting the area's Columbia River Gorge offer a majestic, wide open view as far as the eye can see.

Yet, as the company excavates for a series of pads to be used for the replacement of existing transmission lines, they've repeatedly found themselves in tight situations as they bench their way up those same hills. But what could have been a production-impeding, laborious process, has instead been smooth and productive, largely because they brought — as the saying goes — “the right tool for the right job.”

In this case TBE relied heavily upon the most recent addition to its excavator fleet, a Link-Belt 245 X4. As a result, the company is moving dirt at an impressive clip, power and versatility are continually on display, and “limited access” has lost much of its meaning for them.

Formed in 1993 in Vancouver, Wash., TBE, like many other contracting firms, had humble beginnings. According to Justin Thompson, son of co-founder Brad Thompson, the company started as a general contractor, primarily doing small jobs.

“My father and his brother Joe started the business back then,” he said. “However, not long after setting up shop, they landed a fairly sizeable contract which demanded use of an excavator. That presented a serious problem since they didn't have one yet. So, my dad headed out to the Portland branch of Triad Machinery armed with little more than that contract and a whole lot of confidence.”

Thompson said the story his father tells him about that first meeting amazes him to this day. Apparently, the elder Thompson walked into Howard Cooper and said to the salesman who met him: “My name is Brad Thompson, I have a new excavating business and need a machine immediately. At the moment, I can't pay for it but I'm asking you to trust me that I will pay you when I get paid.”

The salesman looked at him for a minute and my dad said: “I am an honest guy, here's a document saying when I will get my money — when I do, I will repay you.” Then, in one of the riskier moves in all of business, the salesman took him out to the equipment lot and asked him which excavator he needed.

“Those were different times, that's for sure,” said Thompson. “But that salesman, Cliff Humbard, just retired from Triad. And since that first purchase, we've probably bought nearly two dozen other excavators from them. I'd say he was a good judge of character and it paid off well for everyone.”

Fast forward nearly a quarter century and TBE has grown to become one of the Pacific Northwest's premier contractors with specialties that include: commercial and residential construction; storm, water and sewer installation; road construction; work for regional utility companies; and more. The company currently employs more than 50 people and ramps up in the busier summer season to about 75. That steady growth and an influx of new work led to the recent purchase of a Link-Belt 245 X4.

“Several months back, we were involved in a project in Troutdale, a Portland suburb,” said Thompson. “The job called for the replacement of a 10-feet by 12-feet by 80-feet concrete culvert, with a 40-feet wide 30-feet tall by 150-feet long galvanized multi-plate culvert. The existing structure had a tendency to plug easily and had a fish ladder at one end which was not functioning as designed. The replacement culvert would open things up dramatically, and was designed with a slope to provide a more continuous flow, making the fish ladder unnecessary. Prior to starting, however, we realized that most of our larger excavators were already allocated to other jobs and we would need to add a unit. As is always the case, we contacted Tom at Triad Machinery. He said he'd been wanting me to try out the newest machine in the Link-Belt line, the 245 X4 — trusting his judgement, as always, I told him I would send a low-boy to get it.”

TBE immediately saw the benefits of the new machine's minimum-swing radius (MSR) at the Troutdale project. According to Thompson space at the site was tight, particularly in the area from the culvert to the start of the slope.

“We didn't want to remove too much material because, according to contract, we had to purchase all the rock that was going back in,” he said. “That machine allowed us to get into some tight spaces and helped keep the slopes to the maximum legal pitch. But while it definitely played a key role for us at Troutdale, the crew at The Dalles had an even greater need for it and, reluctantly, I had to send it eastward.”

Power to the People

Because of the ever-increasing need for electric power, utility companies are continually updating their transmission lines to carry larger loads. At The Dalles, the Bonneville Power Administration is performing just such an upgrade, a move which, while leaving the existing towers in place, demands the construction of access roads and crane pads. According to Travis Thompson, Machine operator and brother to Justin, the project there was tailor-made for the 245 X4.

“We are excavating for six 200-foot by 300-foot pads and close to a dozen smaller pads measuring 60 feet by 60 feet,” he said. “We have to build each pad up in one-foot lifts — with watering to get the right compaction — and some of the fill depths are as large as 25 feet. This project is ideally suited to the strengths that the 245 brings. It is a bigger machine but, because of the MSR design, it gets us into some really tight cuts and is perfect for working around other equipment. Generally speaking, any time you have a huge counterweight hanging off the back of a larger machine, it can be an issue — that's been eliminated with the 245 X4. In fact, several of the 60 feet by 60 feet pads are being built right up against an existing tower leg. Done with a conventional machine, that could have been a real headache.”

Without the benefits of the machine's minimum swing radius, Thompson said their approach to the job at The Dalles would have been much different and far less efficient. “In tight spots, we would have needed to track back and forth whenever we wanted to spin around,” he said. “Each one of those movements not only adds time to the process, it also increases the risk to worker safety and adds wear and tear on the undercarriage, valves, etc. Granted, the time saved by avoiding those moves is small, but over the course of a project it can really add up. From a worker safety perspective, however, the MSR is huge. It's human nature for people to focus on what's in front rather than what's behind. This is just less that an operator has to worry about.”

By project's end, TBE will have moved between 80,000 to 120,000 yds. of soil to construct the pads, at which point the site will be restored to its pre-existing state.

Additional changes made to the Link-Belt 245 X4 have been welcomed by TBE personnel as well. According to the manufacturer, LBX, a pair of electrically-controlled Kawasaki variable-displacement axial-piston pumps and one Kawasaki gear pump ensure that hydraulic flow gets delivered precisely when and where it's needed. Justin Thompson said the benefits those components provide are evident.

“The controls on the machine are very responsive but not jumpy like I've seen in other units,” he said. “Every move we make with this excavator is smooth. Also, a lot of excavators tend to experience a power drain when you are performing multiple functions at once. Link-Belt seems to have mastered the fluid motion of multiple operations — and that applies to any of their machines.”

A Question of Balance

Earlier this year, TBE found themselves needing to lower a 10,500-lb. mini-excavator into a hole to dig a footing at the Troutdale job. Despite that being a task generally reserved for a 300-class machine or larger, the company opted to use the 245, and again, was more than impressed with the results.

“We lowered the machine off the side — then also brought it back up — and found the 245 X4 to be incredibly stable,” said Justin Thompson. “We repeated that process about a dozen times in the course of the job and were so impressed that we sent LBX some pictures of us doing it.”

TBE is not imagining the improvements it is sensing with the new machine. LBX reports that the 245 X4 delivers 10 percent faster cycle times than its predecessor at SP mode and 7% improvement at H mode. It also features a 2 percent improvement in arm digging force, 1 percent improved bucket digging force, and a 2 percent increased lifting capacity. Also, worth noting according to Thompson, has been the sense of balance the 245 X4 brings to the job. At both projects it has worked, he said the unit's stability has been an eye-opener.

“Normally, with your boom fully extended, say, in moving heavy culvert pipe on site, the displacement of weight will cause some instability that you feel in your tracks,” he said. “This machine, even at full boom extension, has an overall feeling of stability and balance and we have to believe that's been designed in.”

The relationship between Thompson Brothers Excavating and Triad Machinery has been solid since Day One and has grown over the years based on a sense of mutual trust. Justin Thomson feels that the often-overused phrase: “above and beyond” is apparently “business as usual” for Triad.

“Over the course of our business life, we have had nothing but good come from Triad,” he said. “Their service, their response time, their ability to provide things like attachments, buckets, teeth, etc., are all excellent. Here's an example of how they operate: When my dad took our 245 X4 to another job where it was needed more, I called Tom and said I needed a replacement for it. He said they didn't have a 245, but they had just ordered some Link-Belt 210 X3s which were being delivered in about three days. I said that would work and he had it delivered right to us. Simply put, if they don't have what we need, they will do everything they can to find it for us. We buy the occasional used machine at auction but, based on performance, all of our new excavator purchases have been Link-Belt machines and — in a sense, also based on performance — Triad has supplied them. The Link-Belt/Triad combo has been very successful for us and we're not changing anytime soon.”

TBE's culvert project in Troutdale was wrapped up in mid-fall, and the transmission line job in The Dalles is slated for an early 2018 completion.