A decade after the design-build contract was first awarded, the end of a project to straighten a dangerous portion of Oregon’s U.S. Highway 20 is within sight. 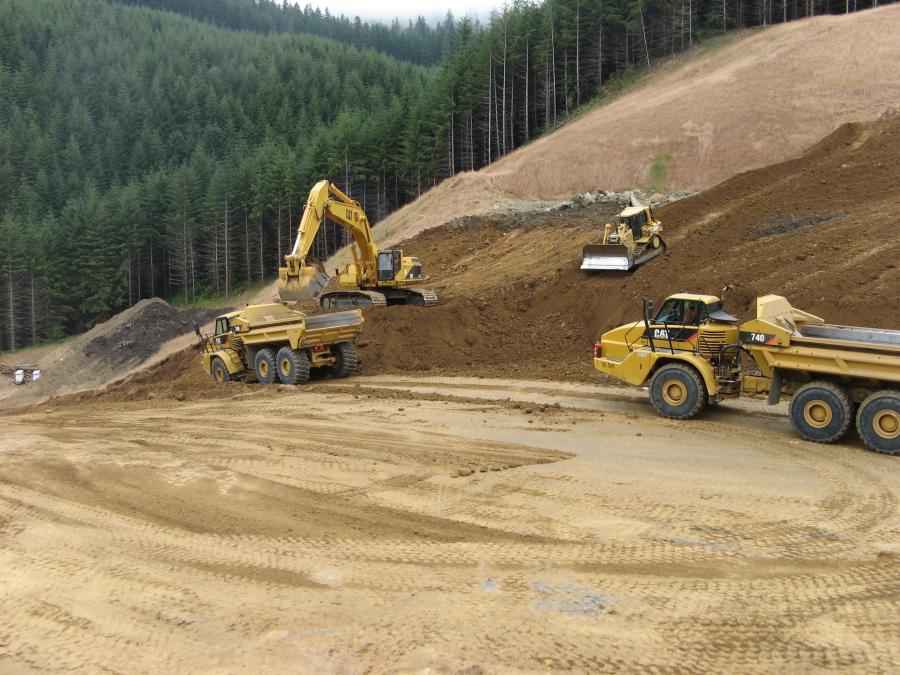 ODOT Photo. A decade after the design-build contract was first awarded, the end of a project to straighten a dangerous portion of Oregon’s U.S. Highway 20 is within sight.

Part 1 of a 3-part series: A decade after the design-build contract was first awarded, the end of a project to straighten a dangerous portion of Oregon's U.S. Highway 20 is within sight, with drivers possibly traveling the new stretch as early as fall 2016.

“The project is intended to improve the safety and operating efficiency of a 10-mi. stretch between Eddyville and Sam's Creek,” said Jerry Wolcott, Oregon Department of Transportation project leader. “On that 10 mile stretch there is an average of 22 accidents and two fatalities a year. It parallels the river. There are tight corners, decreased visibility and it is tucked in trees so it gets a little icy.”

The project has been plagued by problems almost from the start. One year after the job was awarded to Yaquina River Contractors — a subsidiary of Granite Construction Co. of Waterville, Calif. — in the single largest contract ever let by ODOT, the subcontractor was fined $240,000 by the Oregon Department of Environmental Quality for water quality violations. Work was halted for a period, then resumed.

But in 2010, engineers discovered ancient landslides in the Coast Range were still moving and the columns on bridges, some more than 100 ft. (30 m) tall, had moved out of plumb. For a time it was questionable whether the originally budgeted $150 million project would move forward.

In 2012, with roughly half the project completed, ODOT and YRC parted company, and ODOT took control of the project.

“There were challenges that we faced from the very beginning,” Wolcott said. “One, was the size of the project. It is really enormous. The challenge that really chased us around is the weather. There are only about 100 days of the year that we can work. With a project of this size, the weather becomes critical. So we broke it into phases. We took the time to learn as we went and made adjustments as we went based on what we learned the previous summer.”

Phase one was awarded to Scarsella Brothers of Kent, Wash.

The first phase involved demolishing one completed bridge and a number of bridge columns using excavators with a hydraulic claws or breakers to remove the rubble. The phase also included installing trench and horizontal drains, and geotechnical instruments.

“The trench drains capture surface water and direct it away from the landslide,” Wolcott said. “The horizontal drains are placed in a fan array and we insert a half-inch PVC pipe that is perforated, which go into the fill between 300 to 600 feet, and serve to pull the water out of landslide areas and move to the area where we want it to be.”

Crews also installed about 300 instruments in the ground, which feed engineers information about where the landslides are located, how deep they are, which direction they are moving and how fast. ODOT also set up weather stations and with the information from that can correlate precipitation with the water table.

“During that time, we brought in Cat 730 off-road trucks, Cat 330 excavators, and used drilling rigs for the horizontal drains and instrument holes,” Wolcott said. “We also did a little bit of buttress work using a Komatsu 1100 excavator with an 8-yard bucket.”

Phase two was awarded in 2013 to K&E Excavating Inc. out of Salem, Ore.

“K&E uses machine control to maximize available technology,” Wolcott said. “In that sense, it pushed us. They don't have things we were used to seeing. In a lot of ways, it was incredibly fun and much safer. We have test fills, we put in culverts and we were able to go into the cab of dozer and could tell exactly what the elevation was. We didn't have to pull in the survey crew, it was right there.

“We were digging big holes, exposing the slide and filling it with rock. That creates a doorstop for the slide. It can be kind of dangerous. It's an active slide, so don't want to put anyone in the hole, but you have to know how deep it is. We used to tie a rock to a string and throw it in the hole. That was the safest way to do it. What K&E was able to do by using a Cat 369 with a 30-foot reach, was to reach into the hole and they had instruments on left, right and middle and could tell us exactly how deep they were digging. We went from the stone age to the electronic age.”

Using the same technology while laying culvert with four different types of rock bedding, the operator could tell exactly what rock was needed for each part of the design.

“The other interesting thing they brought to the table were two hybrid dozers, that operated both on electric and diesel,” Wolcott said. “It's similar to the power generation of a locomotive. It gives you instant power and fuel savings.

“The only challenge we had with the technology was we had to have GPS coverage,” Wolcott said. “One area was way down in the hole and we lost GPS coverage. But it was a very isolated area.”

Phase 3 was let in 2014 and it also went to Scarsella Brothers. It was a two-year phase.

“The main reason it was so long was we had to move 2.5 million yards of dirt and rock and we didn't want to do it all at once,” Wolcott said. “We didn't want to load the landslides all at once. We wanted to watch the settlement. We reached roughly 40 to 60 percent of halfway mark at first year.”

“The first year was pretty much a scraper show,” Wolcott said. “We ran the Cat 631s 20 hours a day, six days a week. By end of the first year, we had scraped off dirt and were down to rock. The second year became blasting and excavating. We had about 10 dozers total, mostly D9 and D8s. The problem is you have layers of soapstone and sandstone. One is harder than the other and you don't want to destroy the horizontal drains. We wanted to bust up the rock so you are not dealing with car-sized rocks. They had some pretty good-sized trucks, Cat 773s, and Cat 825 and 815 compactors with tamping foot rollers. That's phase 3 in a nutshell. We just finished.”

ODOT plans to award the bid for Phase 4 in April. The four phases will allow the new roadway to open as early as fall 2016, but environmental mitigation will continue, Wolcott said.