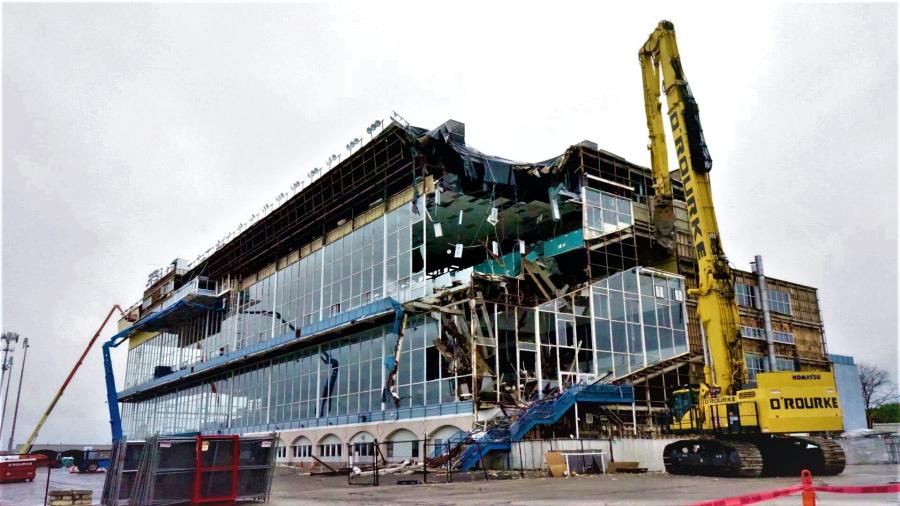 The Turfway Park grandstand was demolished via machinery as opposed to implosion, which allowed training activities to continue after the last live races were held in March 2020. (O’Rourke Wrecking Company photo)

The revamp of the Turfway Park horse racing track in Florence, Ky., began on April 23, 2020, when O'Rourke Wrecking Company Inc. crews began the demolition of the race track's grandstand, a multi-million-dollar job that was completed last August. 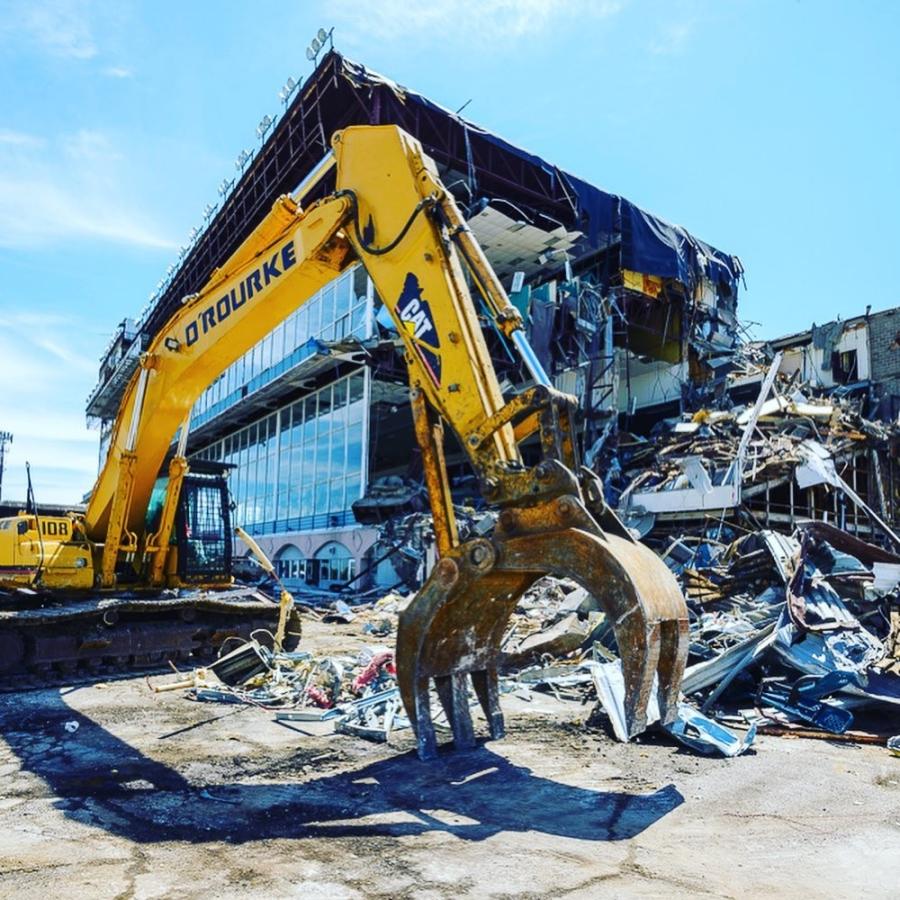 Opened in 1959, Turfway Park is replacing the grandstand with a new Historical Horse Racing (HHR) facility that will house up to 1,500 terminals and provide a large entertainment venue to watch the live thoroughbred horse racing and accommodate large-scale functions during the rest of the year.

Churchill Downs Inc. (CDI), which purchased Turfway Park in October 2019 for $46 million, is investing $100 million for the new facility. This includes a Tapeta surface to replace the existing Polytrack, an all-weather racing surface that had been installed in 2005.

"We are very excited for the future of Turfway Park," said Chip Bach, general manager of Turfway Park Racing & Gaming/Newport Racing & Gaming. "Once our new facility is completed, northern Kentucky will have an incredible venue to experience both live thoroughbred racing as well as Vegas style gaming. Churchill Downs continues to demonstrate its commitment to Kentucky's signature industry, through thoroughbred racing, and we are very excited to see Turfway Park realize its' potential."

Due to a Sept. 24 Kentucky Supreme Court decision regarding historical horse racing gambling, CDI, on Oct. 29, put a hold on the HHR facility at Turfway Park and reiterated an April pause on a $300 million hotel planned for the Churchill Downs race track in Louisville while state legislators discussed HHR, with the hope that they will enact measures to protect HHR and the jobs and revenues that it generates in the state.

CDI CEO Bill Carstanjen stressed, at the time, that the company was seeking a clearer picture on HHR's status before committing to construction.

Since the ruling in the 2020, the Kentucky legislature has clarified the gaming issue and the Turfway Park is back on track. While construction has not started, planning is ongoing and the completion date for the new facilities is June 2022.

The Turfway Park grandstand was demolished via machinery as opposed to implosion, which allowed training activities to continue after the last live races were held in March 2020.

"This project was smaller in nature, but the technical difficulty of the demolition was higher," said Jeff Sizemore, O'Rourke's project manager, whose firm has had experiences with other horse track course projects. "We wrecked the River Downs facility in Cincinnati, Ohio, during their renovations seven or eight years ago, as well as other venues over the years." 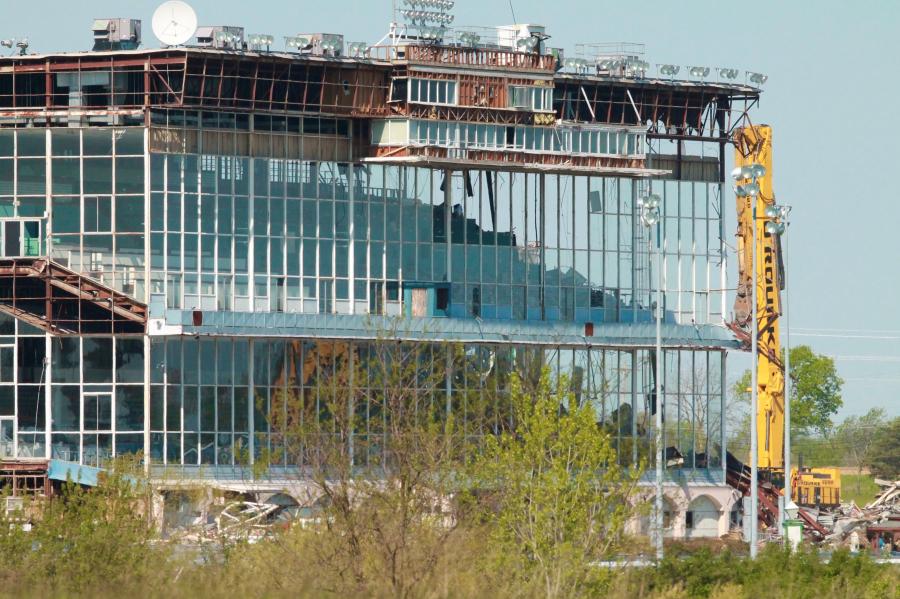 O'Rourke crews demolished the grandstand first, and then simultaneously tore down the office structure and the administration building.

"We had to perform a lot of asbestos abatement for the grandstand structure before we demolished it, which took about three months." said Sizemore. "The biggest challenge was that when the pandemic started, the horses could not be relocated. They were near the end of the winter-time meet, when the horses would normally get transferred to other facilities. We had to accommodate the horses to allow the jockeys to train them every day and we could not start until 9 or 10 a.m. every day — we had to work short days and alternate hours.

"It was very unusual to not be able to start early," he added. "The horses were very skittish and sensitive to the loud noises of the machinery. The barns were located on the opposite side of the track, but we did our best to co-exist with them."

When the exterior of the grandstand structure was originally built, it was clad with transite siding that contained a lot of asbestos and much of it still remained prior to demolition.

"We used several manlifts because of the great heights and the tread and risers framing created great difficulty with access," said Sizemore. "The structure was designed for viewing and it was difficult to get access to a lot of those areas. It was very tough work."

The grandstand was demolished from one end to the other, followed by sorting.

"Once it was down to a low level, after removal by the UHD excavators, it was manageable to reach the remainder of the structure with the other excavators," said Sizemore.

O'Rourke personnel removed the seats to minimize and debris cross-contamination. The historical sandstone horse heads carvings from the exterior fence posts were delicate fragile antiques that were salvaged and crated for reuse in the future project.

The grandstand demolition required five months and was complicated due to the water and sewer mains for the stables, which were beneath the grandstand. 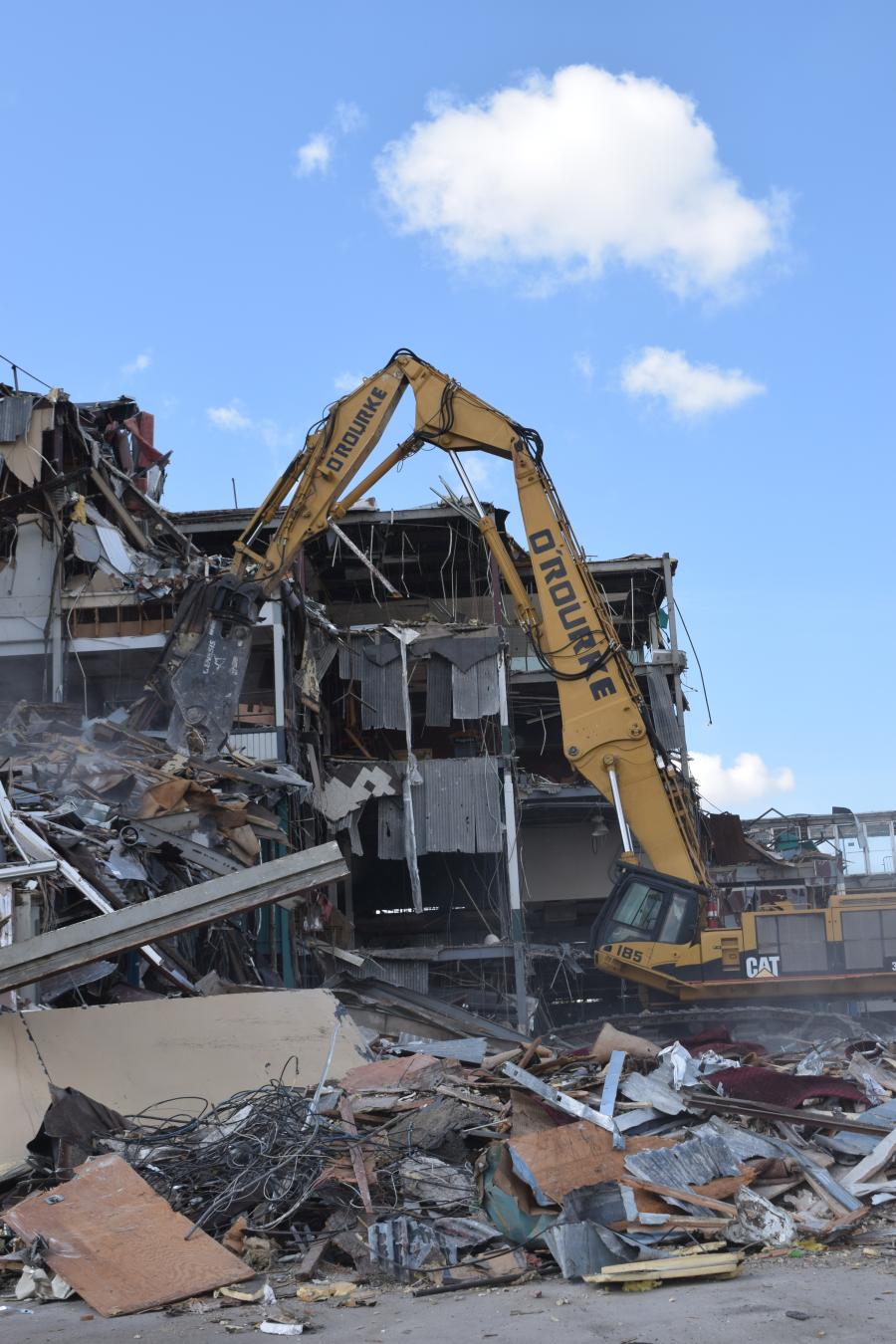 "We had to demolish it carefully so that the services were not interrupted," said Sizemore, who noted that maps of the underground services helped.

The two other buildings were abutted against the paddock and the winners circle. The paddock was retained, which also complicated the demolition.

O'Rourke, which self-performed the complete operation, had 30 people on-site. The demolition activities essentially brought the structures down, which then had crews sort the materials.

"This project utilized a lot of hydraulic shears that are very a high maintenance item," said Sizemore. "The blades have to be flipped, turned and replaced because you're shearing steel with steel and this is very labor intensive. There was a lot of concrete that causes even more difficulty for the equipment via the chopping, braking and pulverizing of it. Thus, you have more cracks in the booms, sticks and buckets and a lot more repairs."

For companies like O'Rourke, selling the salvaged materials is critical.

"When we contemplate a job and price it, we essentially become the broker for the owner," said Sizemore. "We determine how much revenue can be generated from the recovery phase and take that value and credit it off of our bid initially to give the owner a net number. Then we manage the whole disposal of the materials — that takes out a lot of risk for the owner because they have a fixed value and we're motivated to get the highest dollar we can to maximize the project revenue."

The company has a solid and experienced work force.

"We're very blessed at O'Rourke to have a great group of long-term employees and all of our managers have more than 20 years of experience," he said. "Our personnel and managers are top notch and they do a phenomenal job. We don't have a lot of turnover as people typically stay with us for a long period of time. Our employees are our greatest asset."

Turfway Park is about 15 mi. from O'Rourke's main yard and while that may not appear to be a great distance, bringing the equipment to and from the site was a major challenge in terms of the paperwork and permits that were required.

The equipment was moved via super load Trail King 70-ton beam drag, with a tandem axle jeep trailer and a tandem axle stinger. O'Rourke has a fleet of heavy-haul trucks to pull the various trailers and mobilize its fleet of equipment, including multiple Talbert drag trailers. Once they are under way pulling heavy loads, they can attain speeds of close to 50 mph. 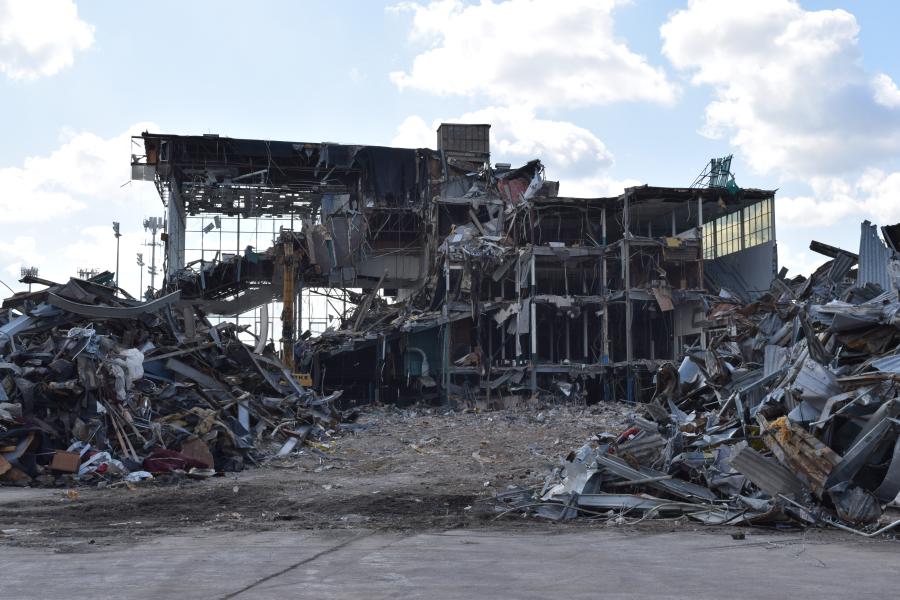 But the securing transport permits is the first step.

"It can take two weeks to get a permit," said Sizemore. "It's a tedious process and it takes a lot of planning. Usually you cannot fit a giant excavator onto one trailer. For example, our Komatsu PC1250 is a seven-trailer load."

The company purchases and rents equipment from Ohio CAT and Vandalia Tool Rental.

"They supported our daily operation," said Sizemore. "We have our staff of mechanics and welders that benefit from the rapid spare parts." CEG