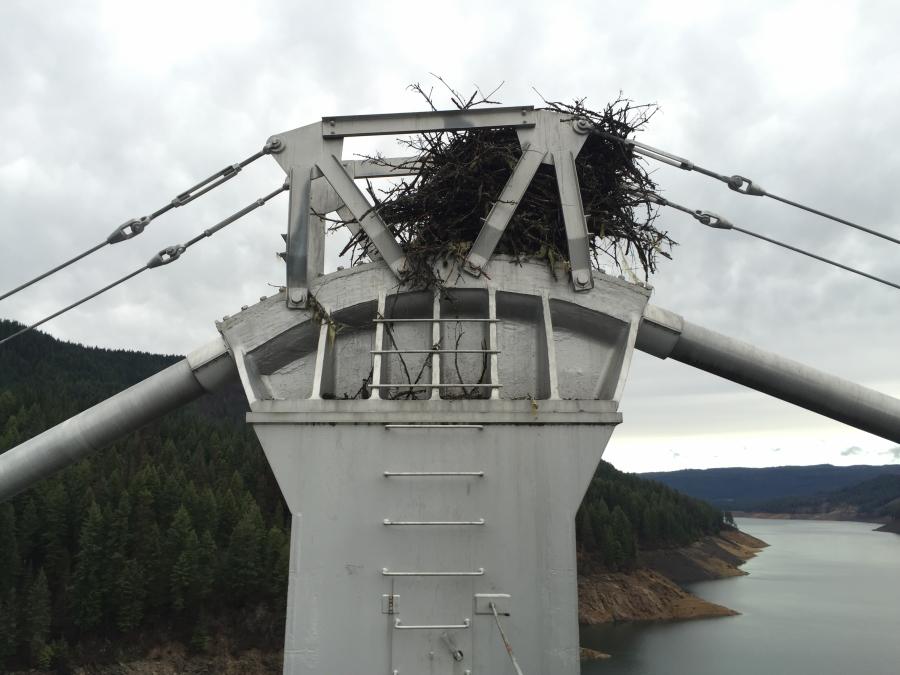 The osprey nest on the bridge before the new platforms were installed.

An environmental innovation and agency collaboration may finally allow the inspection of the overhead cable saddles on the 1,500-ft. (457.2 m)-long Dent Bridge spanning the Dworshak Reservoir on the North Fork of the Clearwater River north of Orofino, Idaho. Four new aluminum platforms were installed Jan. 25 to 29, at the highest points on the bridge, holding the nests of federally protected osprey. A small amount of the old nesting material also was transferred to encourage the birds to start building their nests on the new platforms.

“Inspectors needed to check the 45-year-old bridge, but could not inspect the top of the towers because of the nesting osprey,” said Dan Gorley, bridge asset management engineer of the Idaho Transportation Department (ITD). “Efforts to remove the nests to clear the area for inspection only resulted in the birds returning to rebuild the nests in the same spot.”

The birds were building their nests over the saddles, obstructing the inspections. But as protected birds, the nesting also was protected, so ITD came up with an environmentally responsible plan that accommodates the birds and also the inspections.

Biologists were uncertain if building adjacent nest platforms would be successful because the current nesting location is highly attractive to the birds due to its height and proximity to the water. Therefore, four new platforms were installed 3 ft. (.9 m) above the current nesting areas, at the bridge's crown, about 125 ft. (38.1 m) above the bridge's driving surface. Each platform is approximately 5 ft. (1.5 m) wide by 5 ft. long, and is engineered to hold up to 1,000 lbs. (454 kg).

The new platforms are the collaboration of Gorley and Melinda Lowe of ITD's Environmental Section in Boise.

The potential solution is a powerful example of the kind of innovation and collaborative win that can result from the partnership of several agencies. In this case, three ITD sections (environmental, bridge and district 2, who manufactured the new platforms) coordinated with the Fish & Wildlife Service (providing biological expertise) and Clearwater County (help funding and installing the new platform).

ITD's goal was to have the platforms installed before the birds return in the spring.

ITD's osprey-nest platform is among the nation's first. A similar project was done by Connecticut DOT and partners in 2015. It was partially funded by the public via a “Go Fund Me” program.

Many raptor-nest platforms have been built on utility facilities, but CTDOT and ITD are rare examples of osprey platforms constructed on a bridge.

The osprey is federally protected by the Migratory Bird Treaty Act.