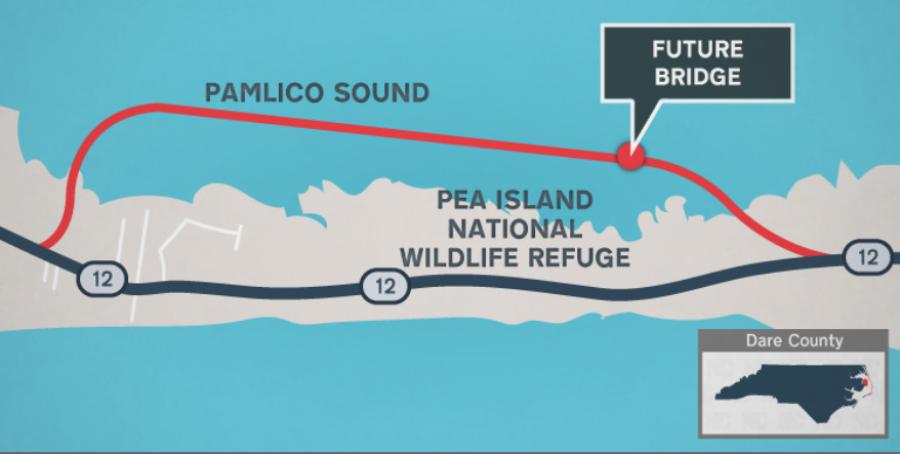 When finished, the $145 million Jug Handle Bridge will stretch from the southern portion of the Pea Island National Wildlife Refuge to northern Rodanthe, and will bypass the infamous S-turns section of N.C. Highway 12, which is highly susceptible to breaches and ocean overwash during storms and hurricanes.

Construction of the Jug Handle Bridge in Rodanthe, N.C., along the Outer Banks, is 39 percent complete, as of June 4, and the bridge is on track to open to the public in the fall of 2021. The announcement was made to the public in an update from Pablo Hernandez, the North Carolina Department of Transportation (NCDOT) resident engineer of the project.

When finished, the $145 million Jug Handle Bridge will stretch from the southern portion of the Pea Island National Wildlife Refuge to northern Rodanthe, and will bypass the infamous S-turns section of N.C. Highway 12, which is highly susceptible to breaches and ocean overwash during storms and hurricanes.

NCDOT's Hernandez reported at the June 4 virtual community meeting that 43 out of 108 bents that will support each individual span of the bridge have been installed, with a total of 164 out of 352 pilings complete. Thirty-four of the 107 deck spans also have been cast.

The 39 percent completion rate is a noticeable jump since the last informational meeting in March, when the bridge was 28 percent complete. However, Hernandez noted that progress was moving slower on the northern end of the structure.

"Yes, we're having challenges at the north end of the project, and different techniques are being used to increase the efficiency of the pile driving operations there," he said. "On the southern end, if you've been watching the bridge being built from the water or the shoreline, or following the media, the southern end of the bridge is ‘coming around the curve'. So, we are coming out of the curve and are [starting] on the long straightaway that will eventually connect with the north end of the project."

Hernandez also stated that recent pile driving did not have any impact on the shipwreck in the Pamlico Sound near Rodanthe, which was identified in October 2017 by a team of researchers as a World War II troop transport.

"It is still there, and visible in the water, and we are still monitoring it, as we have another phase where we have to remove temporary pilings around [the wreck]," he said.

When work is complete next year, traffic will start to be phased onto the finished bridge via the new roundabout. At the same time, crews will remove the stretch of N.C. 12 from the southern boundary of the Pea Island National Wildlife Refuge to the northern end of the project.

"We will also start building a new parking lot which will be a replacement for the parking lot that used to be on the oceanside of the New Inlet and is now bypassed by the Captain Richard Etheridge Bridge," Hernandez explained.