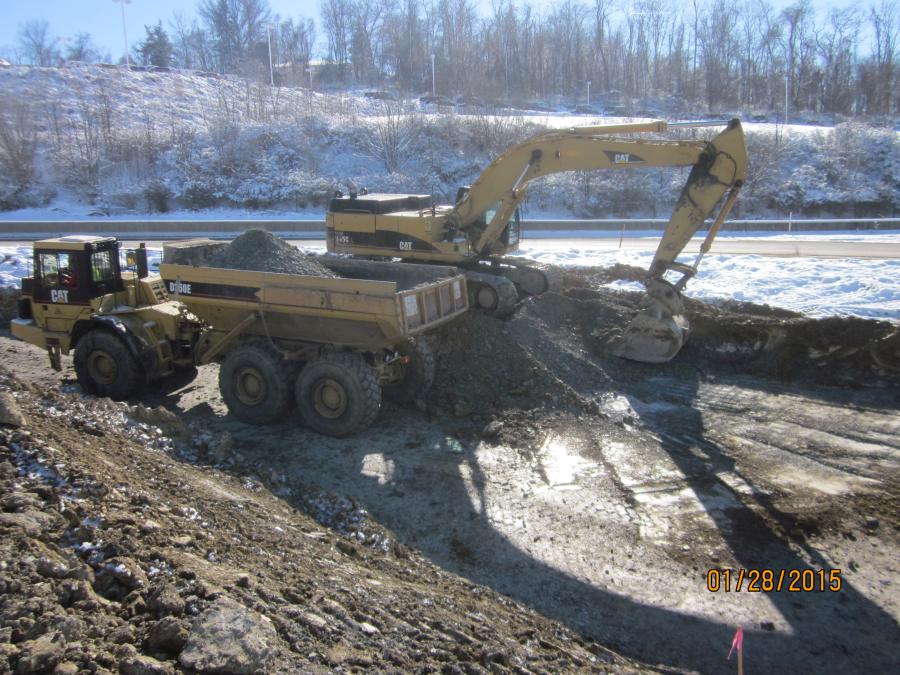 The Pennsylvania Department of Transportation (PennDOT) is currently working on a $57 million road widening project in Washington County, Pa.

The contract was awarded to Golden Triangle Construction Co. Inc., under the direction of Eric Klimas and Wido Sagerer.

“The biggest challenge from the contractor's standpoint was probably securing all necessary resources to meet the aggressive project schedule,” said Valerie Petersen of PennDOT. “In particular, the 2015 and 2016 seasons had a lot of work squeezed into a relatively short construction season [seven to eight months]. In 2015, all of I-70 Eastbound, all four I-70/Sr19 ramps, and the majority of SR19 [diverging diamond] had to be constructed. In 2016, I-70 Westbound and I-79 North ramps had to be built.”

Petersen noted that another challenge was the actual implementation of the diverging diamond pattern on Route 19.

“This work required thorough planning/coordination with all parties involved [PennDOT, traffic signal subcontractor, pavement marking subcontractor and multiple traffic crews from the prime contractor] beforehand so that the night of the actual traffic switch would go without any difficulties, which it did,” she said.

A challenge from the early stages of the project noted by Petersen involved finding a waste area in close proximity to the project and getting the permit for it approved in a timely manner.

“Fortunately, the project had only minor utility and ROW issues which did not result in any delays or extra costs,” she said. “Unforeseen field conditions leading to big change orders and/or delays have not played a big role, either.”

The Diverging Diamond Interchange is one of the unique aspects of the project. Another is that part of the existing concrete roadway was recycled to subbase material used under new pavement. Besides the cost savings, this also eliminated a large amount of waste, according to Petersen.

According to PennDOT's website, I-70 was originally envisioned as the connecting route between north Washington and the Pennsylvania Turnpike in Monroeville. However, the Department of Highways later designated that route as I-79 and proposed the I-70 corridor take on a new alignment that would connect the West Virginia state line to the Maryland state line. The construction of the I-70 corridor as we know it today began in 1953, connecting Bentleyville and S.R. 481. Over the following 15 years, I-70 was built section by section and fully completed by 1968.

PennDOT District 12 is responsible for the design, construction and maintenance of I-70 from the West Virginia state line east to New Stanton, Pa. (exit 57). This stretch of I-70 connects with three other Pennsylvania Interstate routes: I-79, I-43 (PA Turnpike Extension) and I-76 (PA Turnpike Mainline) and West Virginia's I-70.

Some roadway and bridge sections of I-70 in southwestern Pennsylvania were constructed more than 55 years ago. As a result, PennDOT is frequently monitoring the conditions of the Interstate to identify priority rehabilitation and reconstruction needs to improve safety and better accommodate today's motor vehicles.