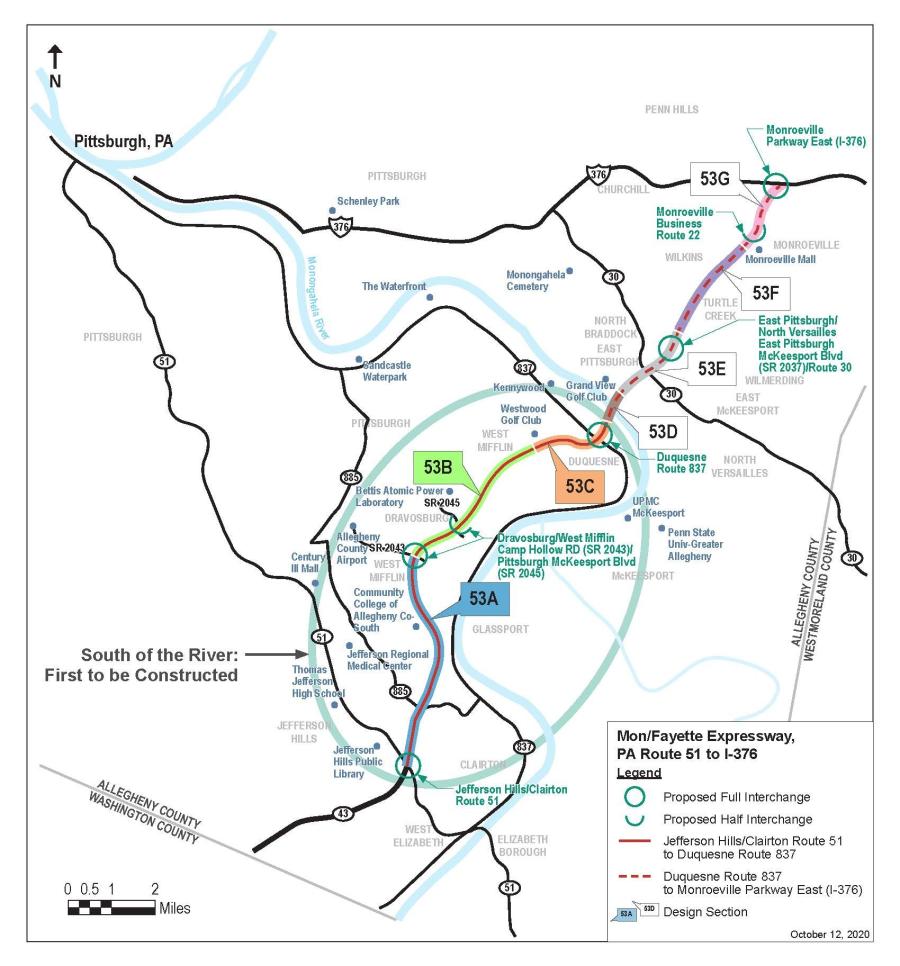 The Pennsylvania Turnpike Commission (PTC) continues to purchase large pieces of property as it prepares to begin construction in 2022 on the next leg of the Mon-Fayette Expressway (PA Route 43) in the western part of the state.

According to the Post-Gazette, PTC agreed in August to pay U.S. Steel Corp. just over $2.8 million for more than 60 acres of land in three locations. In addition, the commission also will acquire about an acre of property near the Port Authority's park-and-ride lot in Jefferson Hills for no cost because the turnpike had previously donated the land for the lot.

In 2020, the turnpike agreed to pay the railroad $21.9 million to change the configuration of its railyard under a bridge along PA 837 in Duquesne. Now, the PTC is buying the land Transtar is vacating so it can relocate that bridge to make room for an expressway interchange.

The agency is picking up another 15 acres between Camp Hollow and New England roads in West Mifflin, near U.S. Steel's Irvin Works, the Post-Gazette reported Aug. 30. That property, which Burd said is needed for construction of the main line of the expressway, cost just over $341,000.

PTC also is obtaining an easement of less than one-tenth of an acre for drainage along Clonmel Street in Duquesne for $4,234.

A spokesperson for U.S. Steel told the Pittsburgh newspaper that the property sales will have no impact on the company's operation.

The Port Authority property in Jefferson Hills is needed as part of construction of a retention pond near the beginning of the project near PA 51. Authority spokesperson Adam Brandolph said the land is vacant and losing it will not affect the lot.

Burd noted that PTC still has another half-dozen major property purchases to complete for the Mon-Expressway project. Overall, the commission expects to acquire more than 250 parcels for the new highway.

The agency expects to seek the first construction bids next year for the eight-mile, $900 million section of the expressway that will run from Jefferson Hills to PA 837 in Duquesne. The first work is expected to be the relocation of the PA 837 bridge and reconfiguration of the Hoffman Boulevard/Commercial Avenue intersection in West Mifflin to get it ready for the expressway's construction.

The main line of the Mon-Fayette will be built in five sections from south to north through 2027, with each section opening as work is completed. Design of the northern section, from Duquesne across the Monongahela River to the Parkway East in Monroeville, is on hold until the turnpike is sure it has the money to complete the project, according to the Post-Gazette.

South of Jefferson Hills, the expressway has been completed.

The toll-supported Mon-Fayette, which has been talked about since the 1960s, is touted as a key element in rebuilding the Monongahela Valley following the decline of the steel industry. It also will offer motorists another route to Pittsburgh International Airport that will allow them to avoid congestion at the Squirrel Hill and Fort Pitt tunnels.