Pair of Sinkholes on Major Maryland Roadways to Soon Be Repaired 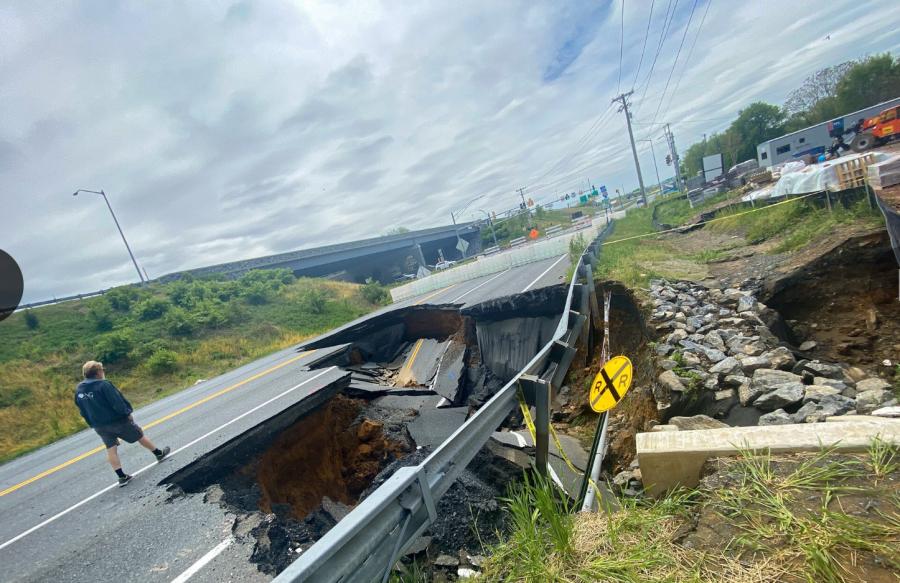 Officials believe the sinkhole stemmed from a waterline break, and subsequently grew larger due to heavy rain and stormwater runoff. (Fox5DC image)

Highway officials in Maryland were on the scene in suburban Washington, D.C., June 15 to assess damage from the latest sinkhole to strike the state's congested highway system since May.

The most recent damage was formed on Interstate 270 when a damaged drainage pipe under the highway caused the 20-ft.-wide hole to form on the southbound lanes of the highway near I-370 in the Gaithersburg area, prompting transportation officials to shut down the lanes.

The 30-in. pipe made of corrugated metal was damaged near the right lane and shoulder of the roadway, according to the Maryland Department of Transportation's State Highway Administration (MDOT SHA).

The Washington Post reported that two days later, on June 17, the state agency said it was still unclear when the freeway will be restored and open to motorists, as workers continued to assess the sinkhole damage in Montgomery County using video equipment.

Until that assessment is complete, MDOT SHA officials told the Post that they could not estimate how long repairs to the pipe and roadway could take.

Unexpectedly, crews spent much of June 16 clearing dense vegetation just to find the end of the pipe, a task made more difficult due to several drainage pipes having been linked underneath the highway, the agency said.

Ride On, Montgomery County's transit system, made route changes because of the sinkhole and told riders those detours could be in effect for two weeks.

State highway officials are working with the county's own transportation department to adjust traffic signal timing on nearby Frederick Road (Md. Highway 355), which runs parallel to I-270, to help with the added traffic expected to take the detour.

In addition, overhead signs to notify drivers of the project long before they approach the road work have been erected, including along both directions of I-70 in Frederick County, the Post reported.

Early on June 16, delays due to the sinkhole extended about 3 mi., according to the Metropolitan Area Transportation Operations Coordination Program. Approximately 190,000 vehicles use the section of the road daily where the hole formed, the MDOT SHA noted.

"We are continuing to encourage motorists to leave extra travel time, use alternate routes or use mass transit," the Maryland highway department said in its statement.

Another Sinkhole in Frederick Due for Fix

Coincidentally, another massive sinkhole, northwest of Gaithersburg in Frederick, Md., is snarling traffic for drivers in that area.

WTTG-TV FOX 5 DC in Washington reported June 17 that construction on that crater, located on Monocacy Boulevard around I-70, is expected to begin the week of June 27.

First reported in early May along the side of the road, within days it had stretched across the entire roadway, prompting Monocacy to be shut down from I-70 at Royal Farms to East South Street.

Transportation officials believe the Frederick sinkhole stemmed from a waterline break, before growing larger due to heavy rain and stormwater runoff. MDOT SHA added, though, that despite the increase in size, the chasm is stable.

FOX 5 DC reported that a contract to begin the repair work in Frederick was awarded earlier in June to Pleasants Construction, from Clarksburg, Md. The company estimates the cost of the repair will be between $700,000 and $1 million.

The contractor also figured the work will take about four to six weeks to complete but warned it could be longer depending on weather conditions and other repairs that may be needed during construction.

The area around the sinkhole will stay closed until construction is complete, FOX 5 DC noted.