The university plans to hire an engineering firm to determine a cause and to evaluate whether any other cross-laminated structural elements in the building are at risk. 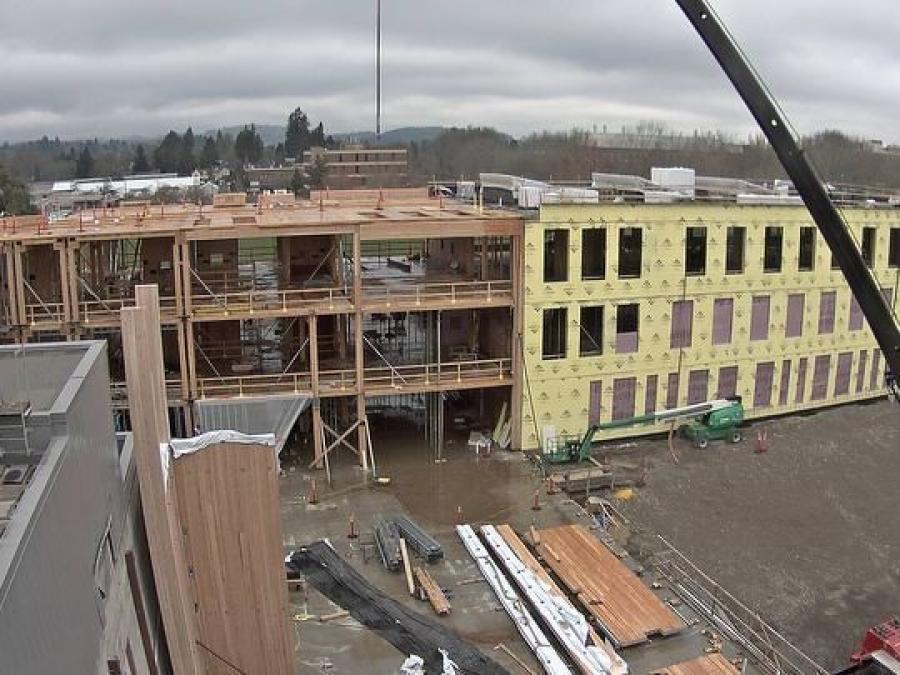 Construction on Peavy Hall has been halted. (OSU photo)

CORVALLIS, Ore. (AP) — Construction on portions of the new College of Forestry building at Oregon State University has been halted after a large section of subflooring made of cross-laminated timber gave way between the second and third stories.

University spokesman Steve Clark said no one was injured in the March 14 incident at Peavy Hall, the Corvallis Gazette-Times reported. He said the university plans to hire an engineering firm to determine a cause and to evaluate whether any other cross-laminated structural elements in the building are at risk.

He said the placement of cross-laminated timber panels will resume when the evaluation is completed, and there are no plans to switch to more conventional materials. The building technique involves using solid wood panels to frame a structure's walls, floors and roof. It has been used for years in Europe, but is relatively new in the United States.

The panels are lighter and much faster to assemble on-site than regular timber. Because the grain in each layer is at a right angle to the one below and above it, there's a counter-tension built into the panels that supporters say makes them strong enough to build skyscrapers.

There is hope that CLT will infuse struggling forest communities with new economic growth, while reducing the carbon footprint of urban construction with a renewable building material.

The three-story Peavy Hall will eventually become the new home of the OSU College of Forestry and is intended to be a showcase for the Oregon timber industry.

The project, however, has been unpopular with some students and faculty, who say the original Peavy Hall, demolished two years ago, could have been renovated for much less than $79.5 million.

Anthony Davis, the college's acting dean, said he did not expect the failure of the CLT panel to increase the project's cost or significantly delay its completion, which is scheduled for early next year.

He said he still believes the completed Peavy Hall will serve as a compelling showcase for Oregon's wood products industry.

"I know the capacity we have, I know the strength of Douglas fir and I am confident in our ability to continue to lead in the development of this material for use in midrise or high-rise buildings," Davis said.

The failure involved a cross-laminated timber panel manufactured by a firm in Riddle, Oregon.