PANYNJ Names Team for Newark's New $2.7B Terminal One 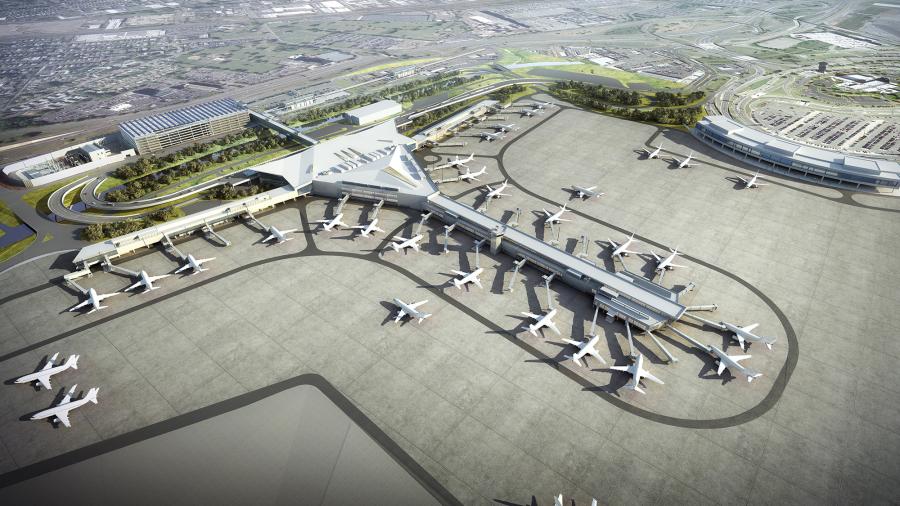 The new, approximately 1-million sq. ft., 33-gate common use domestic terminal will be an open, modern terminal that will vastly improve passengers' experience and the efficiency of their travel. (PANYNJ photo)

Plans for a new Terminal One at Newark Liberty International Airport advanced with the Port Authority's Board of Commissioner's approval of Tutor Perini/Parsons, a fully integrated joint venture between Tutor Perini Corporation and Parsons Transportation Group Inc., for the design and construction of the new 21st century facility, which will provide passengers with a world-class customer experience, create jobs and boost the region's economy.

The new, approximately 1-million sq. ft., 33-gate common use domestic terminal will be an open, modern terminal that will vastly improve passengers' experience and the efficiency of their travel, with the flexibility in design to grow and change with the increasing demands and the evolving requirements of air travel. The Terminal One Redevelopment program also will provide a more efficient roadway network and create parking for about 3,000 vehicles.

“There has been a continuous surge in the number of passengers at Newark Liberty, which last year welcomed more than 40 million of them,” said Kevin O'Toole, Port Authority chairman.” This board action advances our commitment to address the growing needs of our travelers, which cannot be adequately met by the current Terminal A.”

“Nearly $12 billion in our current 10-year Capital Plan is committed to modernizing our airports,” said Jeffrey Lynford, Board vice-chairman. “With today's vote, we move towards the next phase of the Terminal One Redevelopment project to deliver a world-class terminal with 21st-century passenger amenities.”

The board authorized $1.85 billion in construction and other expenditures, including $1.41 billion for the Tutor Perini/Parsons design-build agreement for the new terminal building and landside construction work. Using a design-build format allows a single design and construction contract, which streamlines and expedites construction. These authorizations include an additional $360 million needed as a result of an increase since the original estimates in costs associated with labor, construction materials and staff resources. Combined with prior authorizations, the total project cost is now $2.7 billion.

Overall, the redevelopment program is expected to generate more than $4.6 billion in regional economic activity, create 23,120 jobs and provide more than $1.9 billion in wages.

Scheduled for a partial opening in 2021 and full operation in 2022, the terminal's phased-in approach is designed to minimize customer inconvenience, while providing for the implementation of new technology, superior dining, retail and amenities that Port Authority customers expect and deserve.

Additionally, the board authorized agency officials to enter into new lease agreements with the airlines expected to operate in the new terminal.

The Terminal One project also passed another major milestone with the award of an operations, maintenance, and concession (OMC) advisory services agreement to Munich Airport International GmbH (MAI), a wholly-owned subsidiary of Flughafen München GmbH (FMG), the operator company of award-winning Munich Airport. Under this innovative advisory model, MAI will provide design and terminal operations advisory services to the Port Authority during the design stages for the new Terminal.