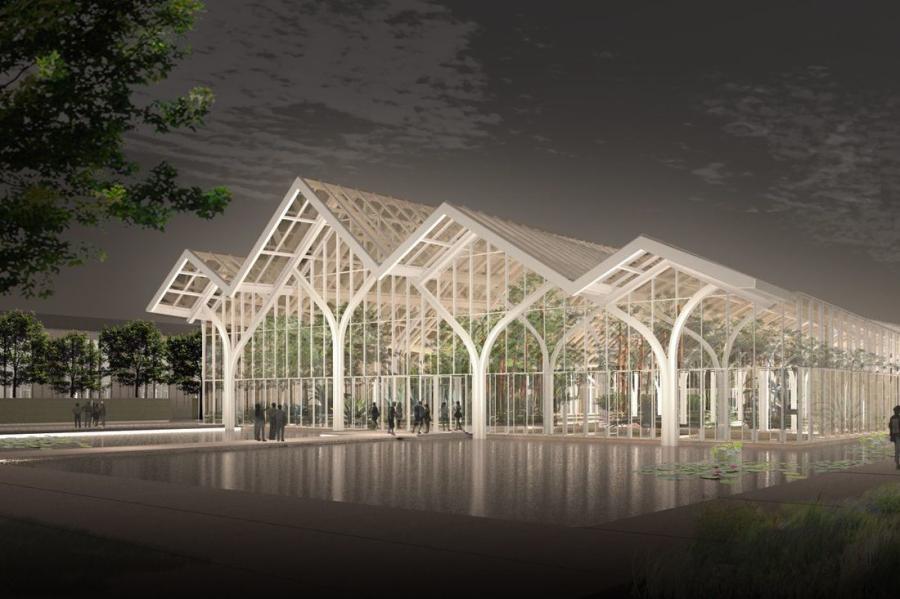 Longwood Gardens, the 1,000-acre botanical garden and former du Pont estate that sprawls over meadows, woodlands, and rolling Chester County countryside in Kennett Square, Pa., has announced it is embarking on the largest makeover of grounds and buildings in its history, a $250 million project that will stretch through 2024 and transform the visitor experience.

The project, dubbed "Longwood Reimagined: A New Garden Experience," focuses on 17 acres at the heart of Longwood and involves, among other things, construction of a new West Conservatory near the popular East and Main Conservatories.

The newest conservatory will consist of a 32,000-sq.-ft. glass house rising in a series of asymmetrical peaks and seeming to float on a shimmering pool of water. The architect is Weiss/Manfredi, with gardens and pools designed by Reed Hilderbrand, based in Cambridge, Mass.

A Bonsai courtyard along the West Conservatory and a new restaurant and private event space also are part of the plan. Other elements include construction of a new education and administration building, renewal of the Waterlily Court and preservation of six historic Lord & Burnham glass houses from the early 20th century, to be relocated later and used for year-round garden displays.

All structures are designed by Weiss/Manfredi, a New York firm best known for its design work for the Seattle Art Museum's Olympic Sculpture Park and the Visitor Center at the Brooklyn Botanic Garden. In Philadelphia, the firm's work can be seen at the Singh Center for Nanotechnology at the University of Pennsylvania.

In a statement, the firm's principals, Marion Weiss and Michael Manfredi, said their design for Longwood seeks to impart a series of experiences from the intimate to the grand.

"The West Conservatory, with its pleated crystalline ridge, appears to float on water and is magically reflected by day and night," they said. "The vaults of the new restaurant and event space are carved into the hillside to reveal views of the Main Fountain Garden. A new arcade frames the historic Waterlily Court, and the great Cascade Garden is sheltered in a custom-designed glass house."

"Above all," he said, "we believed this ambitious project must retain a sense of Longwood's historic roots."

Paul B. Redman, Longwood's president and chief executive, said the transformation project has its roots in a master plan developed by Weiss/Manfredi a decade ago.

"That was a road map to get us to this point," Redman said. "There were things that we needed to do and to put them in place, like building the experience on the east end of the garden, the expansion of the meadow, the relocation of PA Route 52 [completed in 2012]. The main fountain garden [refurbished in 2017] was more than just about dancing water and light and entertainment. Ninety percent of that project people don't even see — it's all infrastructure. And it's not only infrastructure that supports the fountain garden, but it's infrastructure that is setting the stage for this development, and future expansion."

At this point, he added, "we have all of that in order and we can really start thinking about the next 100, 200 years and what that guest experience is going to be. That's really what this is about."

The two-year fountain garden restoration clocked in at $90 million.

The first part of the grander and more expensive project began March 1 with restoration of the Orchid House in the Main Conservatory.

"That's when the first fencing will go up for this project," Redman said in February. "By this summer, construction fencing will be up across the 17-acre site. Guests will probably be able to see earth being moved by the fall. And then we will be in construction all the way through fall of 2024. We're anticipating that this new West Conservatory, and the new admin building and our new restaurant — everything — will debut for the holiday season in 2024."

Even when the fences are fully deployed and construction commences, Redman noted, visitors will be able to venture into almost all of Longwood's key buildings, pools, gardens and meadows.

The $250 million price tag will be met through a combination of grants, a tax-exempt bond issue and endowment funds.

The Longwood Foundation has given a $40 million grant toward the project, and the state has authorized a $500,000 Redevelopment Assistance Capital Program grant for expansion of Longwood's wastewater treatment plant. The project may also draw up to $45 million from Longwood's endowment, which stood at $826.5 million at the end of 2020. The exact size of the bond issue is being determined but will not exceed $200 million, Redman said.

He anticipates the project, once completed, will alter the visitor experience in a significant way.

"They're going to have 17 acres of new garden to experience," he said. "And they won't have to stand in line anymore to wait for food," Redman said.