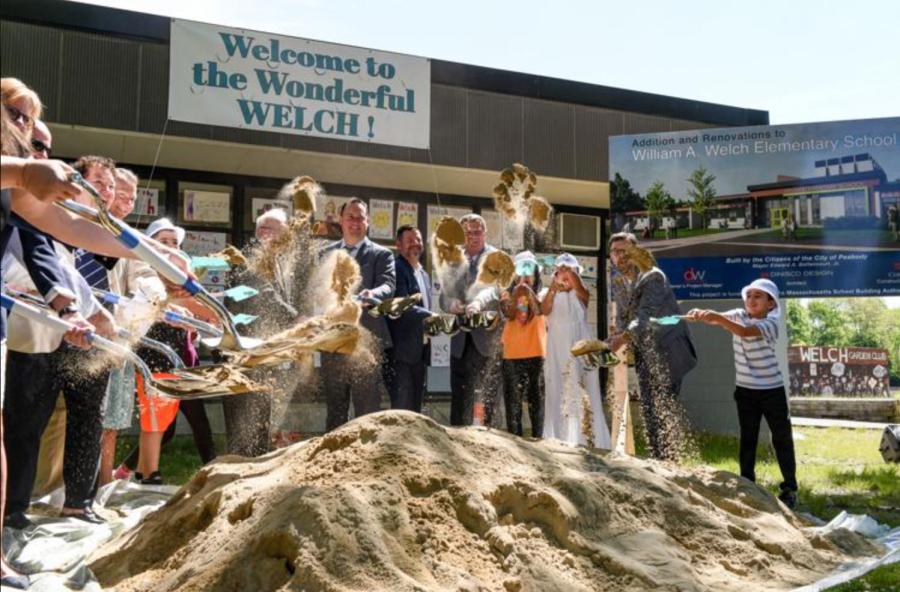 City officials in Peabody, Mass., broke ground on a major upgrade for William Welch Elementary School June 6 that its supporters said will update the building for both its current and future students.

"There's a wonderful spirit in the Welch School, and to have that reflected in the building will be great," Peabody Mayor Ted Bettencourt commented at the event.

The Welch School was originally built in 1972, but since then it has had only minimal improvements, the Salem News reported. The new improvements will update classrooms, create a new entryway, expand the library, reconfigure the nurse's office, make the school more secure and replace classroom windows — along with new air conditioning, ventilation, electrical, plumbing and heating systems in the building.

Construction is set to begin at the elementary school later this summer, according to the News, with an expected completion by the fall of 2024.

Fourth-grader Lucas Machado was one of six Welch School students who spoke at the groundbreaking. He said that while he will not attend the school anymore once it is finished, he is happy that other children will get to enjoy it.

"First, I am feeling happy today that we're getting a new school because others will have a new place to learn," he said. "Second, kids will have a better time on the new basketball court and playground."

Officials originally estimated the project to cost just under $30 million, with the Massachusetts School Building Authority reimbursing approximately 60 percent of the money spent on it.

But Bettencourt said the rising costs of construction materials will likely exceed the initial project estimates.

The improvement project has been a long time coming, "but it was worth the wait," said School Committee Member Beverley Griffin Dunne, who has been a major proponent of the enterprise.

She said the groundbreaking marks a new chapter for the school.

"The Welch School project is designed to give a new life to the building behind us," Griffin Dunne said at the ceremony. "But most importantly, it will allow this building to continue on and provide a safe and nurturing environment to the children of Peabody."

Griffin Dunne's four children all attended the school and joined thousands of former students who went on to have successful lives as parents, doctors, lawyers, engineers, chefs, nurses "and so much more," she said.

"So many people over so many years have made this school special," she continued. "Once you become a member of the Welch School family, you're a part of a pretty special group. Today, we welcome new members to the family."

"This school touches the future and will continue to do so for many more generations," she added. "Thank you all for working so hard on this project, for working for so many years to make this possible."

Second-grader Priscyla Santos DaSilva told the crowd of students, city officials and Massachusetts lawmakers, including state Sen. Joan Lovely and State Reps. Tom Walsh and Sally Kerans, that she is excited to see the school once it is done.

"I am so happy that we are rebuilding the Welch School. I'm excited that we are going to third grade," Priscyla said. "I hope my new teacher is nice."

She also said she wants her classroom to have a new board and bright windows.

"I would like it if our room had lots of light," she added.

In fact, the school's windows have been a problem for years, Griffin Dunne told the Salem News.

The plexiglass material used to make them has clouded with age, and only two windows in each classroom, except for one that has all clear windows, have been replaced with new materials so that the students can see outside.

Helen Apostolides was principal of the Welch School from 1992 to 2003. She came back for the groundbreaking too, and said it was nice to see a lot of the items she once had on the school's plan to address — including new windows — come to fruition.

"All children deserve a good school to go to," she said.