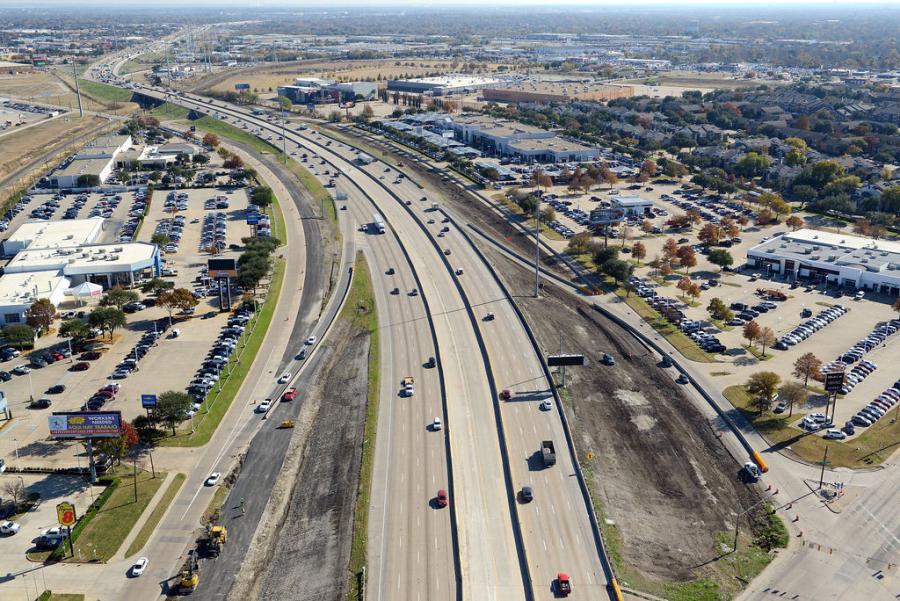 Pegasus Link Constructors — the joint-venture of Fluor Enterprises and Balfour Beatty — are currently at work on the 635 East Project that is reconstructing and widening I-635 from U.S. 75 to I-30, including the I-635/I-30 interchange.

Pegasus Link Constructors (PLC) was awarded the contract from the Texas Department of Transportation in May 2019, which has the joint-venture of Fluor Enterprises Inc. and Balfour Beatty Inc. managing the design and construction of the project. Substantial completion is anticipated in late 2024.

When complete, there will be a total of 10 general purpose lanes and two tolled managed lanes. I-635 East originally opened in 1969 and was designed to accommodate 180,000 cars per day. Recently, the average daily traffic count on I-635 reached 230,000. This increase has contributed to the roadway's top 30 ranking on Texas' most congested roadways list.

PLC has several hundred construction workers on-site, which requires serious coordination that is being bolstered by keeping the many stakeholders updated on the latest developments and plans, such as Dallas County; the cities of Dallas, Garland and Mesquite; utility companies; Dallas Area Rapid Transit and KSC Railway Co.; and area businesses, residents and community organizations.

"This prioritizes the new frontage roads, on the outside, prior to the reconstruction of the mainlanes," said Lisa Walzl, TxDOT public information officer. "However, construction requiring mainlane closures will be performed during the overnight hours and on weekends when traffic is lighter."With crews working throughout the entire corridor simultaneously 24/7 throughout the week, the construction sequence that PLC is using is an "outside-in" approach.

Some sound walls were completed in early 2020, prior to the start of major construction activities.

Since the work began last spring, several benchmarks have been met. By late January, construction of the Galloway Avenue bridge over I-30 reached the halfway point. By February, partial bridge demolition at Abrams Road and Forest Lane cross streets and the Oates Drive and Galloway Avenue bridges over I-635 had begun, and in March, demolition of the I-635 bridge at the Walnut Hill Lane/Kingsley Road underpass had started.

In early 2021, crews also placed a major focus on the partial demolition of the I-635 mainlane bridge sections at Garland Avenue, Jupiter Road and Plano Road underpasses, which were completed in late spring. The construction team will be dedicated to the installation of new bridge substructures at several intersections including Skillman Street, Centerville Road/Ferguson Road, Northwest Highway, La Prada Drive and the I-635/I-30 interchange.

Depending on the location, work spaces can either be tight or ample. At one location, PLC crews have sufficient space on either side of the highway – between four and five lanes wide and several hundred feet to more than 0.5-mi. long — where materials can be stored and equipment can be parked and readied for the next day or to complete routine maintenance. These areas provide safer places for the crews to work and can be used to help with work sites further along the highway. Staging areas give PLC managers more flexibility to plan their operations.

Sound walls at various locations limit the impact of noise.Many of the bridge and overpass sites have right-of-way for crews to set up their operations. This is crucial for stockpiling debris from the ongoing demolition operations. In many cases, nearby roads provide easy and quick access to the ROW areas. This helps with crew members being able to find parking.

Both JV partners have brought in local and regional subcontractors, who are making a vital contribution to the project.

Both firms are able to call in mechanics as needed to keep the work progressing rapidly and on schedule. The dealerships, also local and regional, are helping out via spare parts and the servicing of vehicles under warranty.

"The Texas Transportation Commission designated the 635 East Project as part of the statewide Texas Clear Lanes initiative, organized to address the most congested roadways in the state's metropolitan areas," said Walzl. "The project was designed to relieve congestion, provide local connectivity and improve safety."

Right-of-way acquisition has been completed for the work zone, with project being funded through TxDOT's Texas Clear Lanes initiative, which prioritizes voter-approved funding based on needed congestion relief projects in Texas' metropolitan areas. Funding includes CAT 2, 3, 5, 7, 11 and 12 funding.

"It signals the final steps of a long journey to bring modern mobility to Garland," said Garland City Council Member Rich Aubin at the project's virtual groundbreaking ceremony in October 2020. "Continuous frontage roads, complete exchanges and managed lanes will provide economic vitality, opportunity and justice to our residents and industry."

At the same event, Texas Transportation Commission Member Robert C. Vaughn said the project is not only important, "but it means even more to the 200,000 motorists a day who rely on 635 East and endure very unpredictable travel times as one of the most congested roadways in all of Texas."

During the construction phase, the TEXpress lanes will be closed, but all four general purpose lanes will be maintained during peak travel periods. A website, social media, e-alerts and press releases are being utilized to keep motorists and the community up-to-date on lane closures and detours. For more information, visit 635east.com CEG