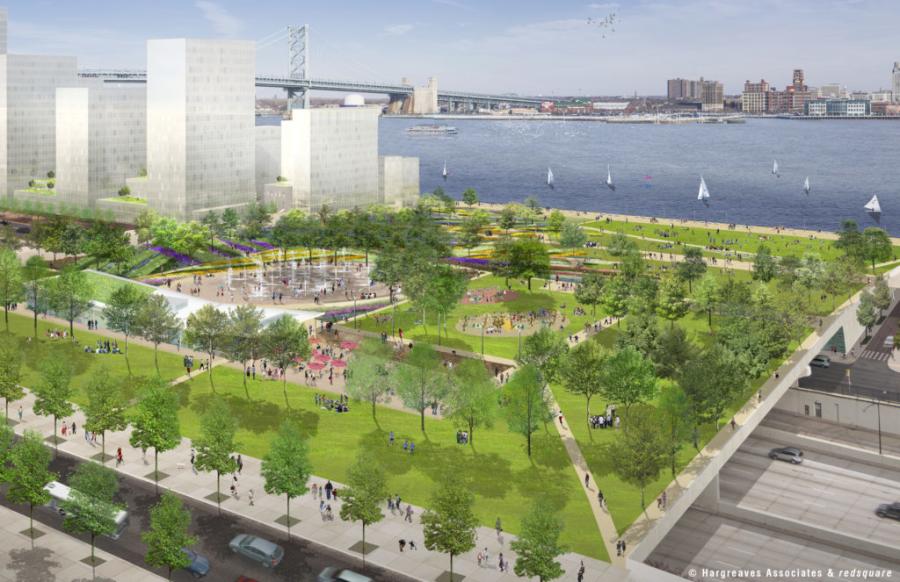 The I-95 cap project just took another huge step forward.

Through spokesman Brad Rudolph, deputy communications director of the Pennsylvania Department of Transportation, the agency confirmed to Billy Penn this afternoon that it plans to commit $100 million to the cap, which would cover the multilane interstate highway from Chestnut to Walnut Streets, and a park that will slope down toward the Delaware River. Plans for the cap have been awaiting funding for decades, and got a huge boost this week when Mayor Jim Kenney told PlanPhilly that the city will allocate $90 million toward the project.

Penn's Landing Park should cost an estimated $225 million. With PennDOT's commitment, that leaves only $35 million until the project is fully funded.

In 2014, the Delaware River Waterfront Corporation released a feasibility study, including renderings for the park, that indicated the project would generate $1.6 billion in economic impact to the area.

Cities around the U.S. have considered design options for their freeways, widely criticized among urbanists for the disruption they prove to walkability, and the mass demolitions (and displacement) that occurred to make way for the expressways. Some cities have opted to convert highways into tighter boulevards, but highway cap parks are indeed a thing, with famous examples found in Boston and Dallas.