The improvement of U.S. 202 Section 300 has been a priority of Chester County since the 1990s due to stifling traffic congestion and its aging infrastructure. 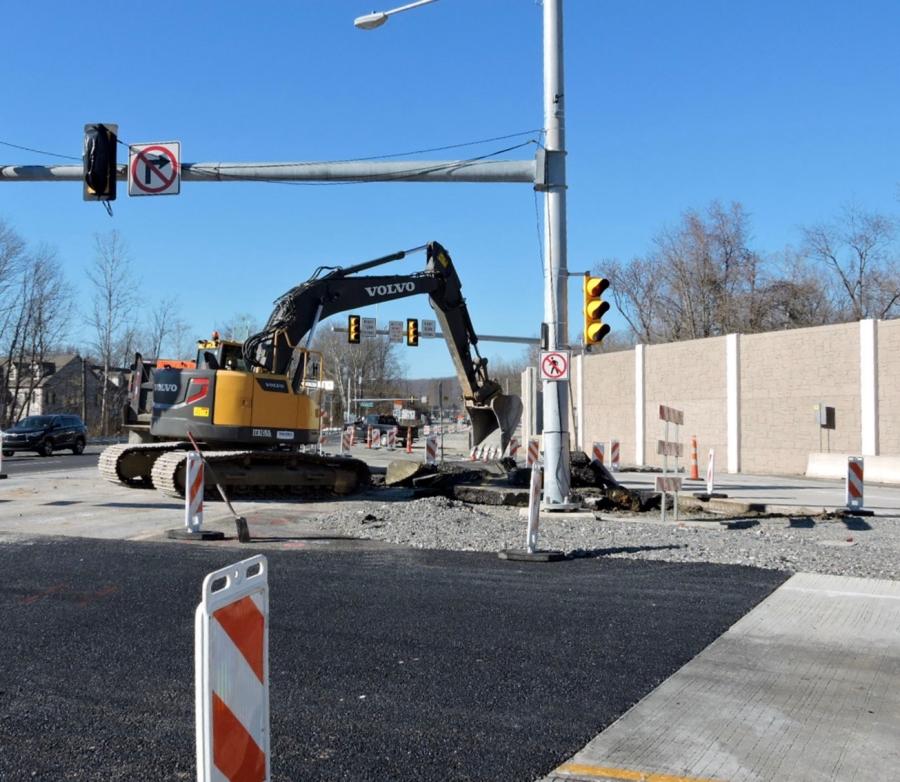 PennDOT photo. The project called for the expansion and rebuilding of Section 300 of U.S. Route 202 in Chester County, Pa.

“Due to significant growth in the region,” said Eugene J. Blaum, PennDOT's assistant press secretary, Engineering District 6, “traffic increased on U.S. 202 to levels well beyond those that the four-lane highway was originally designed to handle. More than 75,000 vehicles a day traveled on this section of U.S. 202 prior to the start of construction, and the improvements being made will allow the highway to carry current and future traffic safely and more efficiently.”

The improvement of U.S. 202 Section 300 has been a priority of Chester County since the 1990s due to stifling traffic congestion and its aging infrastructure. This part of U.S. 202 is located in the heart of the Great Valley Corporate Center between King of Prussia and West Chester. It lies in close proximity to major business parks, shopping centers and residential neighborhoods. U.S. 202 is a vital artery in the Philadelphia Region and its proximity to several business centers in Chester County make it an invaluable transportation resource. The purpose of the improvement project is to relieve weekday traffic congestion, which is a daily occurrence in Section 300 where U.S. 202 reduces from six lanes to four lanes and where eastbound U.S. 30 (Exton Bypass) traffic merges onto northbound U.S. 202.

PennDOT rebuilt and widened U.S. 202 Section 300 to improve traffic flow, reduce congestion and enhance safety. U.S. 202's former pavement and bridges were worn, deteriorated and in need of replacement. PennDOT added a third northbound and southbound travel lane along the 6.5-mi. (10.5 km)-long section of the highway. Six lanes of U.S. 202 now tie into the six-lane section to the north from the Route 252 Interchange to Interstate 76 in King of Prussia. This northern part of U.S. 202, Section 400, was rebuilt and widened from 1999 to 2003. The new U.S. 202 Section 300 also ties into U.S 30.

The overall project cost $266 million, which includes $228 million for the five construction contracts and close to $37.4 million for preliminary engineering, final design, utility relocations, and right of way acquisitions. The improvement project is financed with 80 percent federal and 20 percent state transportation funds.

“The contractor [Allan Myers] advanced the project from the start and maintained four travel lanes on U.S. 202 during peak travel times” said Blaum. “This project required U.S. 202 to be rebuilt in stages and we've done this through a series of traffic shifts. Initially, the contractor strengthened the shoulders and moved traffic onto them. Then traffic was shifted to the northbound side and to the center to allow crews to reconstruct and expand the southbound side of the highway in 2014. In 2015, crews rebuilt the northbound side of U.S. 202 and traffic ran in the median and on the southbound side. The final phase of work in 2016 was the reconstruction of the center of U.S. 202.

“Travel on U.S. 202 through the Section 300 is much better now because the corridor is open to six travel lanes,” he added. “Motorists realize the importance of this project, which includes new ramps and improved signals at the Route 401 interchange.”

Construction workers were protected with a glare screen barrier to create isolated work zones and access points that permitted crews to reach the work sites and allowed for materials to be delivered.

“The final phase involved the construction of the concrete glare screen and concrete median shoulders. ”

The barriers were prefabricated and were installed as delivered.

“The Department held progress meetings every other week and discussions occurred daily,” said Blaum. “The work was well-executed and well-orchestrated. The winter wasn't tremendously harsh, other than a few storms.”

While anticipated, some of the earlier grouting work still posed a challenged.

“We had to perform compaction grouting under three structures — the Chester Valley Trail culvert, the Route 401 bridge, and the bridge that carries U.S. 202 over Planebrook Road,” said Palmer. “Each location required compaction grouting in advance of starting the substructure work. The solutions were prepared in advance and ended up more involved than anticipated. We did an initial round of grouting and then had to go in with secondary holes. Through verification drilling, we identified some areas that required tertiary grouting in-between the previous locations for the stability of the structures.”

Urban Engineers also served as the project management firm for the previous widening done on Section 400 of U.S. 202, immediately north of the current project.

“We learned that communications is key to a successful project and this has made the current project a success,” said Palmer, who noted that the new road is a concrete one. “The potential for sinkholes played into the pavement design and a rigid pavement was selected. PennDOT did a cost/benefit analysis based on the area. The northern area of Section 400 was prone to sinkholes because of the underlying karst limestone formations underneath this area of U.S. 202.”

A concrete roadway was also installed for the Section 400 work. Palmer noted that subsurface problems occurred on that project with the construction of a long exit ramp to take U.S. 202 traffic to I-76 east.

“A considerable amount of sinkhole grouting was done due to the amount of voids underneath the area where a new ramp had to be built,” he said. “Thankfully, we have not encountered such issues on the Section 300 work, but we were prepared just in case.”

Allan A. Myers' main yard/shop is 40 minutes away from the job site. The firm also rented some property nearby to serve as a staging area for the duration of the project.