PennDOT Performing Massive Rebuild of I-80 Interchange in East Stroudsburg 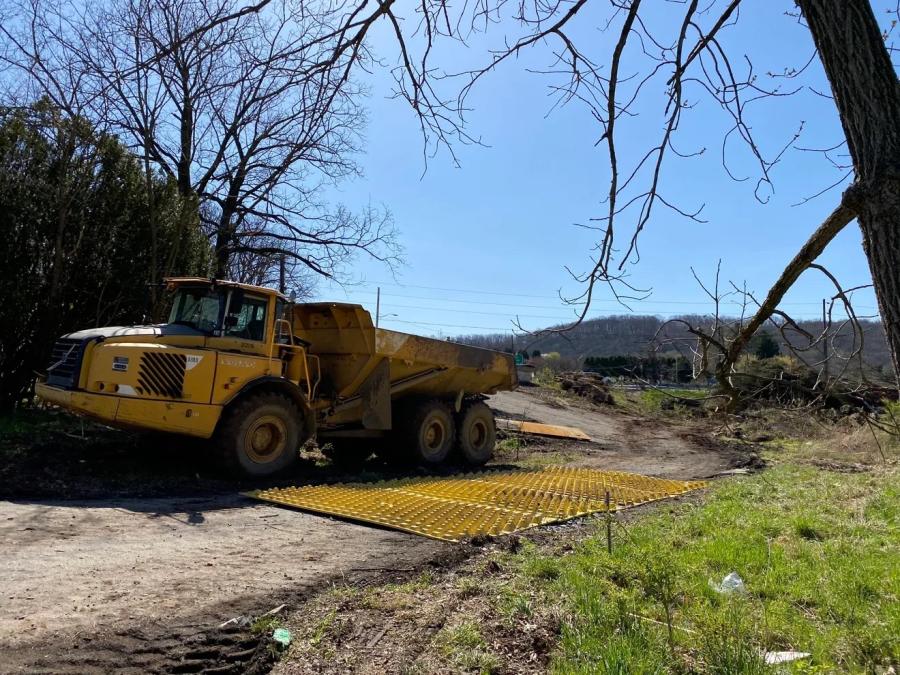 Construction equipment and vehicles are lined up and ready for the start of a planned four year project at the 308 interchange off Interstate 80 in East Stroudsburg. (Maria Francis/Pocono Record photo)

The East Stroudsburg interchange at Interstate 80 is undergoing a major construction rehabilitation, which is to include roadway expansion, new bridges and multiple traffic roundabouts in the northeastern Pennsylvania city — all to stay in step with the community's growth and development.

The $93.9 million "Eastburg Project," as it is known locally, recently broke ground and construction crews are under way at the Exit 308 site, the Pocono Record in Stroudsburg noted on April 26.

The twin communities of East Stroudsburg-Stroudsburg have experienced a tremendous amount of growth in the past decade, the newspaper said, and continues to see more expansion with nearby residential and commercial developments. According to the Pennsylvania Department of Transportation (PennDOT), this has pushed the traffic volumes beyond the capacity intended of the current infrastructure.

This section of the I-80 corridor sees an average of nearly 80,000 vehicles daily, of which 22 percent are trucks, revealed PennDOT. Exit 308 also is known as the Prospect Street exit and brings in daily traffic to Lehigh Valley Hospital — Pocono, East Stroudsburg University, downtown East Stroudsburg's Crystal Street and the shopping plazas along Lincoln Avenue that include Walmart and the Giant Food Market.

The rebuilding effort was originally slated to start in 2020, prior to the COVID-19 pandemic.

PennDOT has begun installing barriers along I-80 at the Prospect Street exit, signaling the start of a four-year construction project that will last through July 2026.

Rebuild Promises a New Look and Feel to Exit 308

According to a project report found on the PennDOT website, the general contractor for the interchange rebuild is J.D. Eckman Inc., based in Atglen, Pa.

"The project is going to replace the Prospect Street bridge over I-80 and also the bridge that carries over Lincoln Avenue," said Ron Young, an officer of PennDOT. "It will extend ramps on and off I-80 and will bring new roundabouts on both sides of I-80 at this intersection. These roundabouts will be like the one at the Delaware Water Gap Exit 310."

The reconfiguration of the Exit 308 interchange also will bring a fresh look and feel as the two roundabouts will lead to the creation of several local street realignments, Young explained, as well as add a signal at the new T-intersection of Prospect Street and Forge Road/Greentree Drive and bring signal improvements to the Prospect Street and East Brown Street intersection.

In rebuilding the freeway exit, I-80 is to be widened from its current four lanes to six lanes in east Stroudsburg, and the Prospect Street Bridge will be replaced. That overpass is being designed to meet the current vertical clearance standards over I-80, making it taller and wider.

A little further west, the project also will rebuild the mainline bridge over Lincoln Avenue and the former DL&W Railroad.

PennDOT noted the reconstruction of the interchange ramps will make them longer than the existing ramps to allow traffic to better get up to speed and to slow down. The rebuild also will create several retaining walls along I-80 to limit the impact on the right-of-way.

PennDOT outlined the focal points of the five stages of the Eastburg Project just before the work began:

East Stroudsburg Borough Manager Brian Bond lauded the I-80 Exit 308 Interchange project when he told the Pocono Record that when completed in 2026, "It will feel more like a gateway, welcoming people entering East Stroudsburg Borough from Interstate 80. Prospect Street will be widened from East Brown to Center Street and lined with sidewalks and decorative lighting."

The Exit 308 reconfiguration was described by PennDOT as the next step in a long-range plan to widen and improve the interstate from the Delaware River at the point where the highway enters the state from New Jersey. Part of the effort includes raising bridges to accommodate tractor trailers passing underneath them.

The Pocono Record noted that three bridges on I-80 have already been built in Pennsylvania from the Delaware Water Gap Plaza, along with new ramps, roundabouts and some expansion of the interstate.

PennDOT's overall I-80 Reconstruction Project includes another 3.5 mi. of interstate roadway reconstruction, encompassing Exit 307 to a point just west of Exit 303, all with similar interchange plans and a new flyover lane taking westbound traffic to U.S. Highway 209 and a newly constructed full interchange off I-80 accessing both directions of PA Route 611 at the Shoppes at Stroud Plaza. Changes to the existing Main Street and Dreher Avenue exists also are planned.

Young said the next portion of the I-80 Reconstruction effort is in the final design stage.

"If all moves according to plan, [the design] should be done by end of this year and then out for bid," he explained. "[The rebuild] could possibly break ground sometime next year."