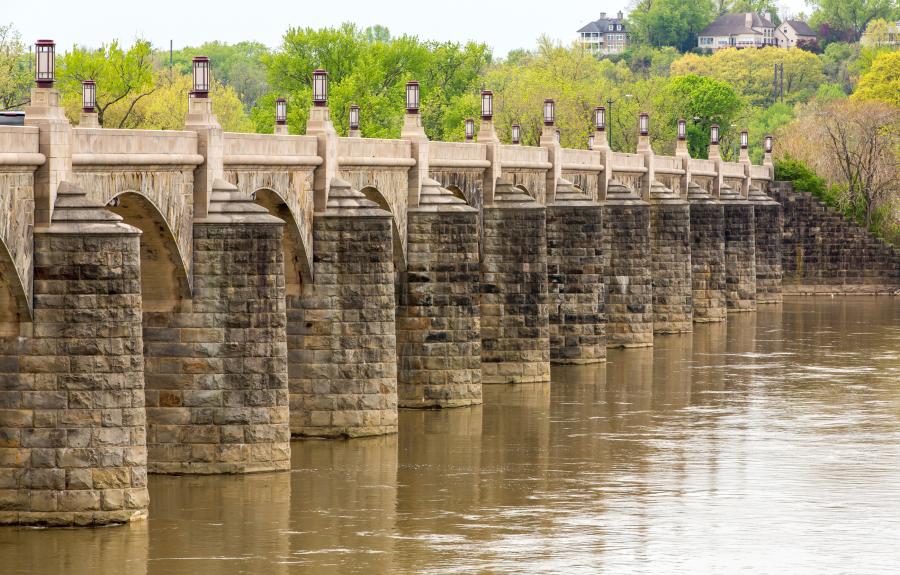 The Market Street Bridge in Harrisburg is among the state’s 2,829 structurally deficient bridges. The west shore span of the bridge carries 13,000 vehicles a day.

With each passing day, deteriorating roads and bridges become a bigger issue across the state of Pennsylvania.

A 2018 report card on the state's infrastructure from the American Society of Civil Engineers gave Pennsylvania a D+ for its highways, roads and bridges after inspecting their condition.

Hard to believe, but the latest report was better than the previous one from 2014. Due in part to Act 89, approved by the state legislature in 2017, an 8-cent per gallon tax was put in place at the state's gasoline pumps to help fund PennDOT's efforts at fixing the transportation infrastructure.

Today, motorists living or driving through the Commonwealth of Pennsylvania pay the highest gasoline tax in the United States — almost 58 cents (75 cents for diesel fuel) a gallon per each fill-up.

In 2019, there are still plenty of old bridges and highways in desperate need of repair — fixes that may not happen for years to come. Some new projects were given a boost by the fuel-tax increase, but according to Auditor General Eugene DePasquale, many more repairs and replacements have not been funded because monies are being diverted away from important PennDOT projects to the Pennsylvania State Police (PSP), another underfunded agency within the Commonwealth.

The practice has been going on for the last several years despite the fact the state's constitution stipulates that revenues from Pennsylvania's Motor License Fund are to be used "solely for the construction, reconstruction, maintenance and repair of and safety on public highways and bridges", a responsibility of PennDOT. The fund is a repository for fuel tax revenues and motor vehicle license and registration fees that are collected.

The PSP has needed a larger budget as its mission has changed slightly over the last two decades. Due to funding problems at the small-town level, about two-thirds of Pennsylvania's 2,561 municipalities rely on PSP fully or partially for patrol services in lieu of a full-time local police force. A total of 1,291 communities need the PSP round-the-clock, while other townships get part-time coverage from State Troopers, and 851 larger cities and communities pay for or share their own police force.

The issue of adequately funding both state agencies has been talked about and debated at the State Capitol for years, but any connection between the Motor License Fund and the PSP has generally flown under the radar among ordinary citizens. 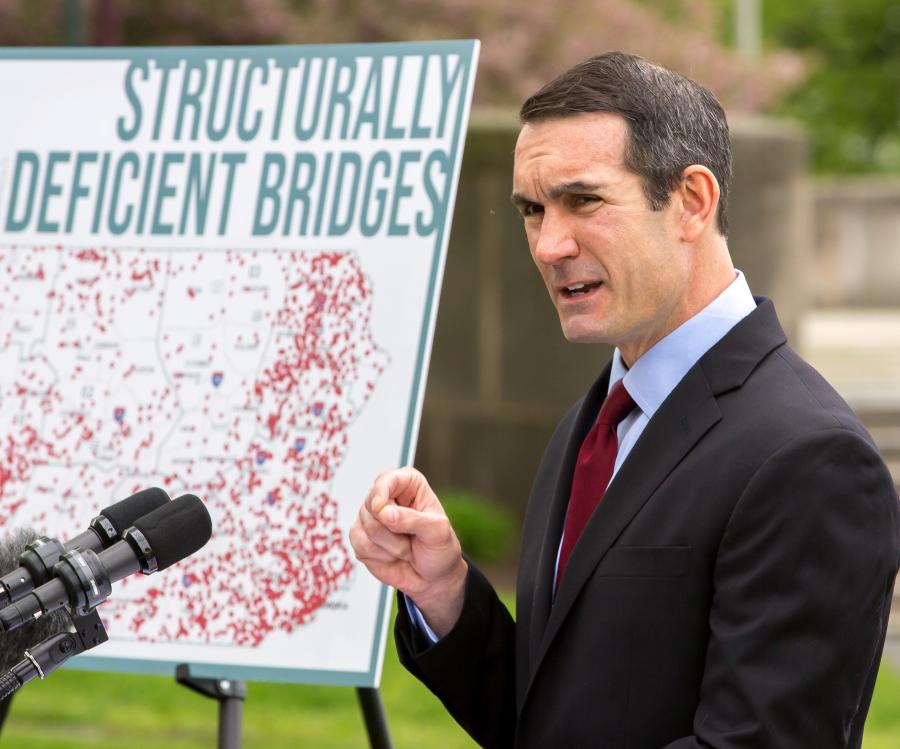 At a news conference in Harrisburg on April 25, DePasquale revealed that after an audit of PennDOT, his office found more than $4 billion had been transferred from the state's Motor License Fund to the PSP over the past seven years — nearly $800 million in Fiscal Year 2017-18 alone.

DePasquale added that PennDOT would be further along in making repairs on inadequate roads and fixing or replacing the 2,829 bridges in the state deemed insufficient with the billions of dollars that legislators used to fund the State Police. Many of those bridges average more than 50 years in age, he said, beyond the lifespan designers intended.

"That $4.25 billion could have cut that list in half and if PennDOT could use all of the gas tax money for roads and bridges, we could get that number to zero in about five years," he contended.

"Pennsylvanians are frustrated that our roads and bridges still need so much help at the same time we are paying the highest gas tax in the United States," he continued, noting that the tax adds $5.76 to the cost of every 10 gallons of gas pumped in a car's tank.

Past and present Pennsylvania governors and lawmakers have tried to identify creative ways of keeping the money flowing to both the Motor License Fund and the PSP, with the practice of rechanneling funds from the former to the latter being just one, despite its questionable constitutionality.

For instance, current Gov. Tom Wolf, a Democrat, recently launched his third attempt at proposing a user fee to support the State Police budget. The sliding-scale plan would charge municipalities with 2,000 or fewer residents an $8 per-person user fee. Citizens in towns and cities with a population greater than 20,000 would pay $166 per year for PSP coverage. The projected income to the state is $103 million.

"While the area covered by PSP encompasses 82 percent of the state's land mass, it includes only 26 percent of residents," wrote Rep. Sturla in a publicly-released email to his fellow House members. "Meanwhile, the remaining 74 percent of Pennsylvania residents who pay local taxes to fund their full-time local police services are also paying state taxes and fees to support PSP, essentially subsidizing free police protection for municipalities that choose not to fund their own local patrols."

Interestingly, small towns and communities in Pennsylvania are not obligated to pass a set of requirements to obtain PSP coverage or to form a regional police force with other municipalities. Efforts in the Senate are underway to encourage communities to form such alliances to share costs and reduce the burden on the PSP.

After the Great Recession in 2008, many small Pennsylvania police agencies became too expensive to maintain and were forced to disband, explained Democratic Sen. John Sabatina Jr. As a result, the PSP had to expand its coverage to those communities.

"But it is not really fair for people in towns with police to have to pay for their local police and the state police for other towns, through their taxes," he continued. "It was never the intention of the Motor License Fund to pay for the State Police but due to the financial situation somebody had the idea to do that."

Sabatina also is the minority chair of the Senate's Transportation Committee where he serves alongside majority Chairwoman Sen. Kim Ward, a Republican from Westmoreland County.

"We're trying to come up with a better solution to this funding issue and we know that it cannot be allowed to continue," he said. "We are certainly aware of the bad condition of our roads and bridges and that dollars to PennDOT are being strangled by giving them to the State Police.

"Senator Ward and I want to get the PSP their own separate funding source, however the difficulties lie in the details. All of us on the committee have different ideas on how to do it, but so far, we haven't been able to agree on a solution," he said.

At Auditor General DePasquale's news conference, he listed several current or future PennDOT projects that could accelerate in their progress if the Motor License Fund had just the $800 million it lost in last year's budget to the PSP.

Just focusing on bridges, PennDOT has identified needed repairs on 11,758 structures at an estimated cost of $12.7 billion — from simple repave jobs to entire replacements.

Many of these and other projects designed to fix the huge number of Pennsylvania roads and bridges needing attention could be pushed farther into the future if the method of funding is not resolved, said a representative for one Keystone State trucking organization. 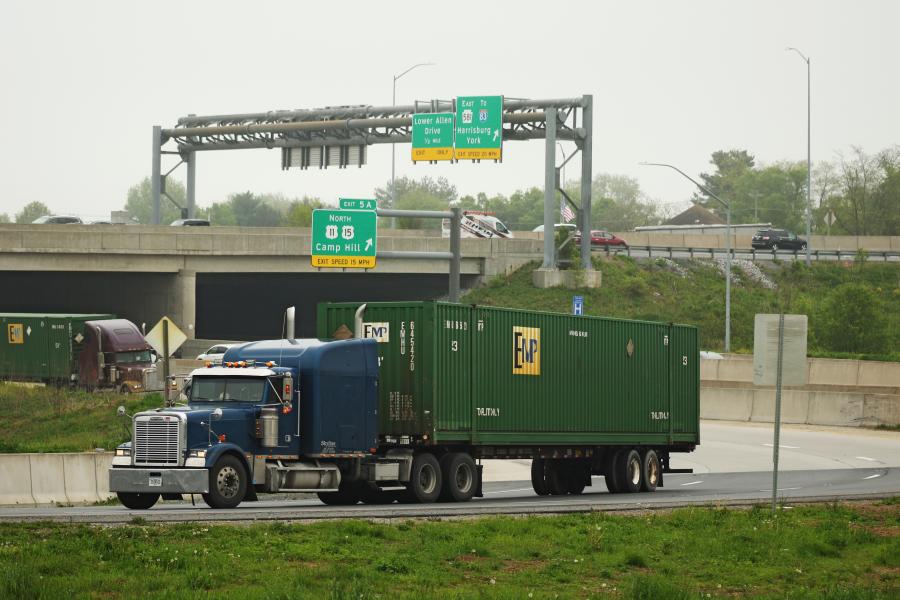 The interchange between PA Route 581 and I-83 was recently listed on the American Trucking Research Institute's (ATRI) list of Top 100 truck bottlenecks in the United States. It is located in Camp Hill, Pa., just across the Susquehanna River from Harrisburg.

Kevin Stewart, president and CEO of the Pennsylvania Motor Truck Association (PMTA), said he and the members of his group are understandably unhappy with the substandard roads and bridges, the failure to fix them in a timely manner and the diversion of PennDOT money to the State Police.

But, as someone who worked in a civilian capacity for the PSP as a roadside inspector and administrator, he takes a balanced view of the situation.

"Please know that the PMTA absolutely supports the Pennsylvania State Police and the important role they play here in the state," he said from his office in Harrisburg. "However, when funding that was intended for roads and bridges is not being used for their building and maintenance, and a larger piece of the pie goes toward non-highway construction, it is an obvious concern of ours.

"Besides the significant number of structurally deficient bridges in the state, the American Transportation Research Institute [ATRI] every year publishes a list of the top 100 truck traffic bottlenecks across the country and Pennsylvania now has five of them [three in Philadelphia and two in Harrisburg], so money that could be better spent on repairs could also be used to reduce congestion."

He added that poorly-maintained roads are also a major cause of increased car and truck maintenance costs, which, in the case of the trucking industry, leads to higher costs of consumer goods.

When asked if the residents in Pennsylvania are exasperated that their tax dollars cannot give them fully-funded infrastructure and police, without monies earmarked for one partially paying for another, Sen. Sabatina was succinct in his answer.

"I'm not sure the public is fully aware of the situation," he admitted. "They probably would be angered if they had to choose between good roads and good police."