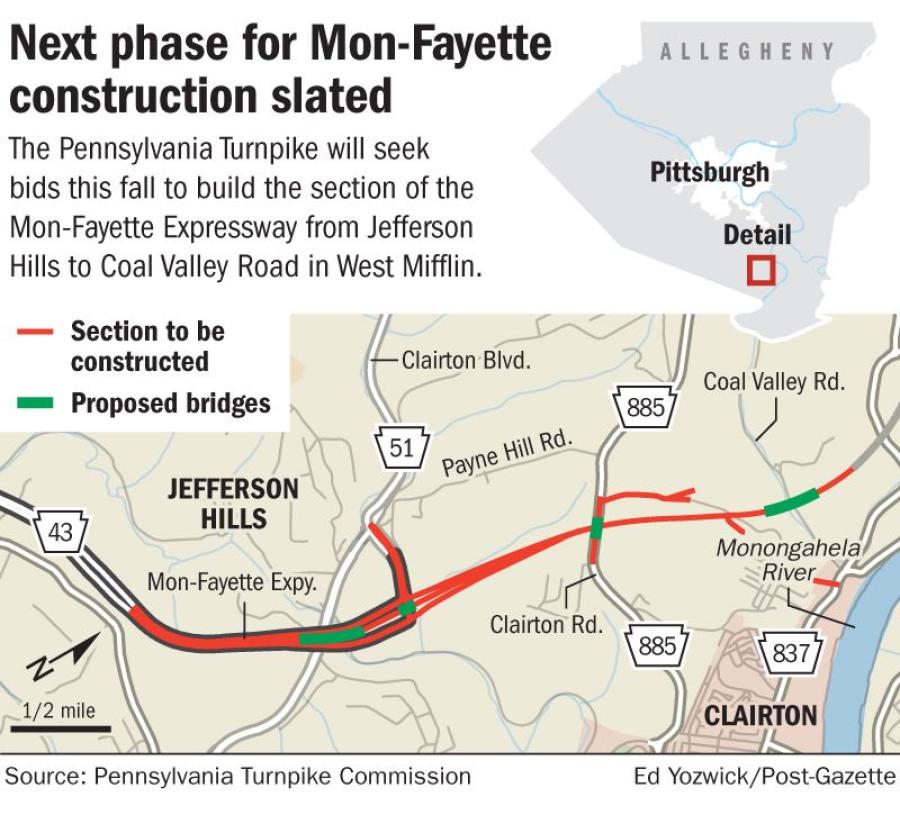 When construction gets under way in 2023 on southwestern Pennsylvania's Mon-Fayette Expressway, the new roadway will provide more than a new travel connection for residents of the Monongahela Valley.

As reported by the Pittsburgh Post-Gazette Oct. 10, the new toll road, designed to run between Jefferson Hills and Duquesne, will serve as a test bed for innovative transportation construction techniques that could use noise reduction walls to reduce pollution and produce electricity from traffic-generated road vibrations for road signs, among other goals.

The Pennsylvania Turnpike, which is building the Mon-Fayette toll road first discussed in the 1960s, approved a $2.7 million agreement in early October with the University of Pittsburgh for a series of pilot projects during the highway's construction, the Post-Gazette reported.

Turnpike engineers have been working for the past 18 months with the Impactful Resilient Infrastructure Science and Engineering (IRISE) consortium, based at Pitt's Swanson School on Engineering, to select the projects.

"We were looking for something that's actually doable and not some pie-in-the-sky kind of thing," explained Julie Marie Vandenbossche, a professor of civil engineering and former head of IRISE. "This is the largest thing we've done through IRISE."

The turnpike has been part of the consortium since it formed in 2016 as a collaboration among the university's engineering school, construction firms and government transportation agencies, noted Ed Skorpinski, an engineer project manager of the turnpike. After watching the group work on smaller projects such as how to reduce and respond to landslides, the agency decided to use the association to design and test innovations, he said.

"We thought [building the expressway] could be a unique test bed," Skorpinski told the Post-Gazette.

The plan, he explained, is to test ideas — many of which have not been tried before — during construction of the expressway and decide whether they produce positive results for a reasonable price. If so, they can then be included in future projects, Skorpinski said.

Quartet of Pilot Projects to Be Tested

The Pennsylvania Turnpike is expected to advertise for bids for the first section of the toll road before the end of the year, while the test specifications are still being developed, so pilots likely will be included in later segments of the project, according to the Pittsburgh news source.

The southern leg of the Mon-Fayette highway, which will be built sequentially from Jefferson Hills north with more than a half dozen construction contracts, is predicted to see a 2028 completion.

The four pilot projects will be:

The Post-Gazette noted that the turnpike already is working with the Advancing Sustainability through Powered Infrastructure for Roadway Electrification (ASPIRE) program at Utah State and the Ohio Turnpike to develop a demonstration project at the Pennsylvania-Ohio border over the next five years.

"This is a good example of the kind of things we can do," he added. "These are the things [road designers] need. That's the reason IRISE was created."

Or, as Vandenbossche told the Post-Gazette, "This is when research becomes fun."

Skorpinski said trials are important for the turnpike, which manages more than 500 mi. of roads across Pennsylvania.

"This is stuff that hasn't really been done in this region," he explained. "Hey, if we find out this is something that works, we [will] absolutely look to incorporate it throughout our system."