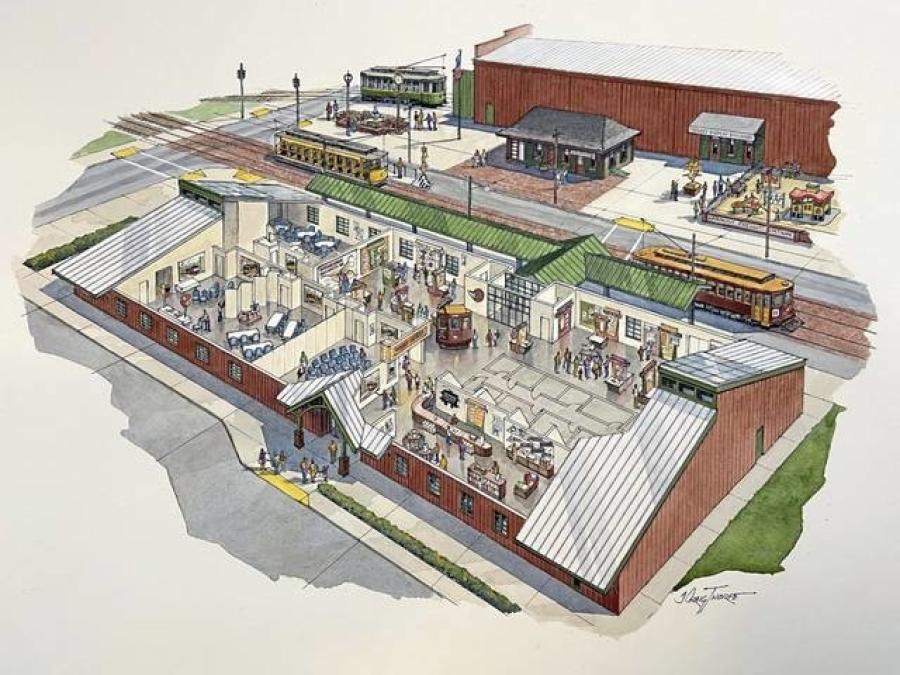 Trolley fans have flocked to the Pennsylvania Trolley Museum in Washington, Pa., since the 1950s. Now, the popular attraction southeast of Pittsburgh is getting an expansion designed to give trolley devotees an even more immersive experience than before.

More than $14 million has so far been raised to fund the project, leading museum officials to hold a groundbreaking ceremony to start construction on May 6 of a new 21,000-sq.-ft. Welcome and Education Center.

The general contractor on the expansion is Waller Corporation, based in Washington, Pa. In fact, the builder has worked on various projects for the Trolley Museum for more than 25 years. The enterprise is the largest construction project ever awarded by the institution, said campaign chair Ray Betler to the Pittsburgh Tribune-Review for an article published on online at TribLive.com

Practical reasons were behind building the trolley museum's enlargement, according to Scott Becker, the Pennsylvania Trolley Museum's executive director.

"We have a small visitor's center, but it's only about 2,000 square feet, so it's pretty small," said Becker. "Of course, we have the trolley barns. But we've run out of room, especially when we have special events."

The new, larger space will house the museum's visitors' center, interactive exhibits, classrooms and event rooms. It also will enable the depository to better display and interpret exhibits that tell the history of the Trolley Era as well as STEAM-related exhibits to educate and engage visitors.

TribLive reported that the Pennsylvania Trolley Museum is working in partnership with the Carnegie Science Center to create the former's new exhibits.

"The Carnegie Science Center is right now designing interactive STEAM exhibits," Becker said in speaking with TribLive. "They're going to be on different topics like electricity, braking and we even have one called ‘Rolling Melting Pots' that talks about all the diversity that trolleys were able to foster because people of all different backgrounds were able to ride the streetcar together."

A dedicated classroom will be part of the expanded visitor's center — a first for the museum. In addition, a larger Trolley Museum store is in the works as well as a brick street with two trolley tracks running its length.

"It's set up like a movie set," added Becker. "It [will have] old fashioned streetlights, old fashioned traffic lights, and it's going to have curbs on it so we can park antique cars as the trolleys roll down the street."

"It's really going to give us a lot more latitude to provide some great programming," he said.

According to figures obtained by TribLive from the Pennsylvania Economy League of Greater Pittsburgh, the new exhibition center in Washington will add $10 million to the region's economy and create 116 full- and part-time jobs.

The Pennsylvania Trolley Museum is located just off the intersections of I-79 and I-70. Built in 1954, it has a collection of 50 trolley cars from Pennsylvania, Ohio and West Virginia, along with New Orleans' famous streetcar named Desire, made famous in the Tennessee Williams novel.