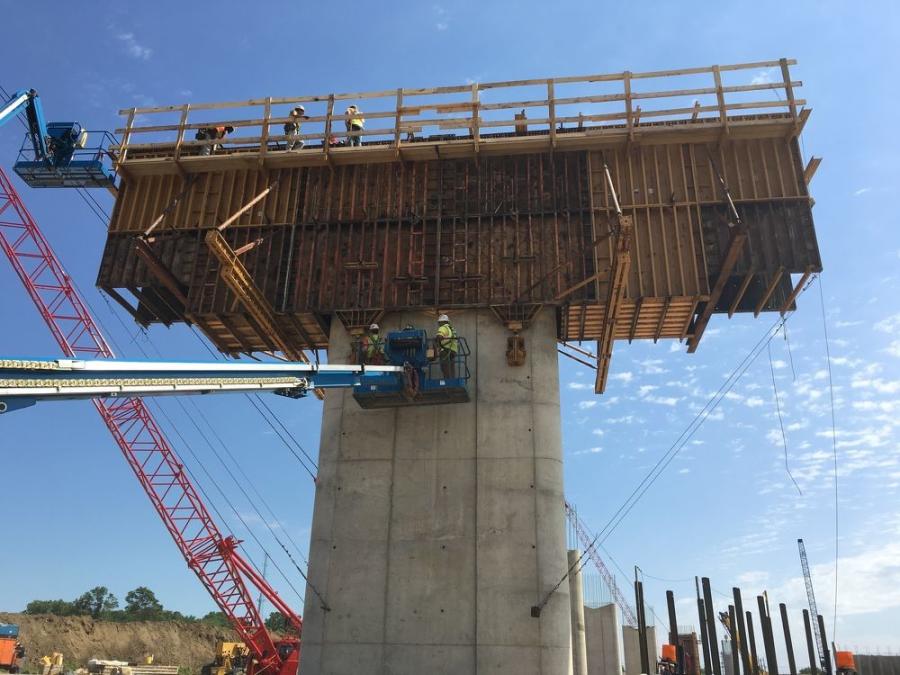 There are three construction projects left to complete for Stage 1 of the Pennsylvania Turnpike Commission's $425 million I-95 Interchange project in Bensalem and Bristol Townships in Bucks County. The TPC expects to have the work completed in late 2018. 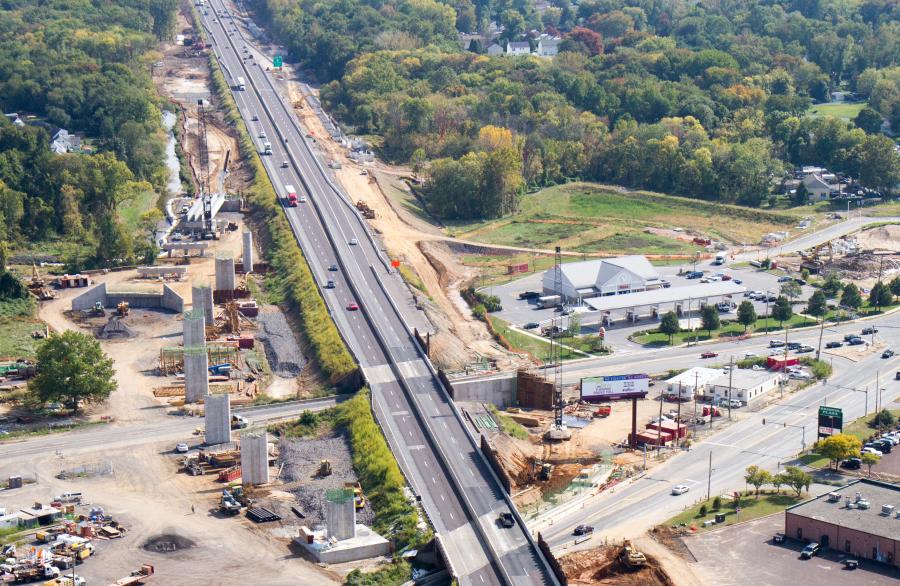 The project is the last piece of the interstate network to be completed as defined under the Federal-Aid Highway Act of 1956 and the first transportation project in Pennsylvania to be funded through the EB-5 visa program.

The work on Section D10 is being done by PKF Mark III Inc. Crews began in October 2014 and this section should be completed in the late fall of 2017. Gannett Fleming, Pennoni Associates and Rummel Klepper & Kahl were responsible for the design.

Crews from James D. Morrissey Inc. (JDM) started work on Section D20 last September. This portion of the interchange connection ($119 million) involves widening the existing I-95 between Neshaminy Creek and existing I-276. The work on this section is expected to be complete by 2019. Gannett Fleming, consultants and Rummel Klepper & Kahl designed the infrastructure. 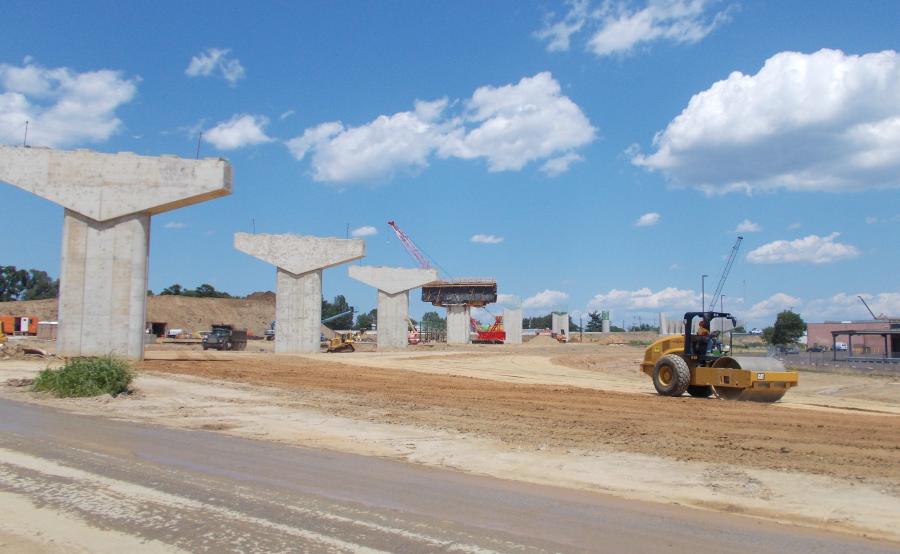 The existing I-95 north of the Turnpike will be re-designated as I-295 in Pennsylvania and New Jersey with new signing installed as part of this project. Section D20 consists of widening and reconstruction of approximately 2 mi. (3.2 km) of existing I-95.

"The additional lanes are provided not only to safely connect the interstates," said Mark F. Raup, P.E., senior engineer project manager, "but to accommodate future traffic growth in the study area and the region. The primary goal of the overall project is to complete I-95 but there was no interchange between the I-95 and the Pa. Turnpike to make that connection, and we're doing that by using two existing highways the Pa. and New Jersey Turnpikes.

"Currently, people need to get off the highway and travel along signalized arterials to get from one highway to the other. Once the flyovers are in place, motorists from Philadelphia going over to New Jersey and making the return trip, will be able to stay on I-95.

"This is a benefit to the local community as there is a lot of traffic that uses the arterial roads that doesn't have to be there," he added. "It will be removed and hopefully the community will be able to regain the roads for economic development and easier local traffic."

"The highway lanes and bridges that we are reconstructing has pretty much reached the end of its service life," said Raup.

The lifespan of the new roads and bridges is more than 50 years.

The design did have to take into account environmental considerations based on an Environmental Impact Statement and Federal Record of Decision prepared between 1992-2003.

"There were a lot of commitments made with respect to mitigate the impact on the socio-economic community and natural and cultural resources in the area," said Raup. "The project is taking place in a first ring suburb of Philadelphia, but this area is right at the edge of the coastal plain and there are some sensitive environmental features that the agencies wound up being concerned about because many are some of the last remaining features of their kind in southeastern Pennsylvania."

Following the completion of the prep work, the installation of erosion and sedimentation controls and sandbag cofferdam and relocation of Mill Creek began, along with the construction of basin M1 on the eastbound Pa. Turnpike.

Foundation piles for the northbound flyover bridge have been installed and trees were cleared at the east end for construction of new eastbound off ramp at Route 13. The rock embankment was constructed on the eastbound Turnpike, just east of Route 413.

"Working adjacent to wetlands and the soils encountered in the area requiring additional undercutting and backfilling with stable embankment material," said Raup. "The project is essentially one two-mile long work area."

The goal is to have the western area of the project complete by July 2017.

"The contractor is recycling existing concrete and bituminous pavement," said Raup, "and using in certain areas for embankment widening."

The work area ranges from the turnpike/I-95 interchange/I-95 south to PA 413. Construction includes a new 15-span bridge that will connect the newly designated I-95 into Philadelphia; retaining walls along I-95; sound barrier walls; installation of new drainage systems, construction of basins for erosion control and storm water management; replacement of signing and guide rail; installation of ITS facilities; and re-designation signing from Scudder Falls to Center City Philadelphia.

A main challenge for the design team dealt with a sanitary sewer that crosses I-95, which needs to be extended in both directions.

"This requires a substantial design in terms of a pumping effort," said Raup, who noted that the work on the sewer has been completed. "It was nothing extraordinary, but it was definitely something that had to be done as it was pumping up to seven million gallons per-day." 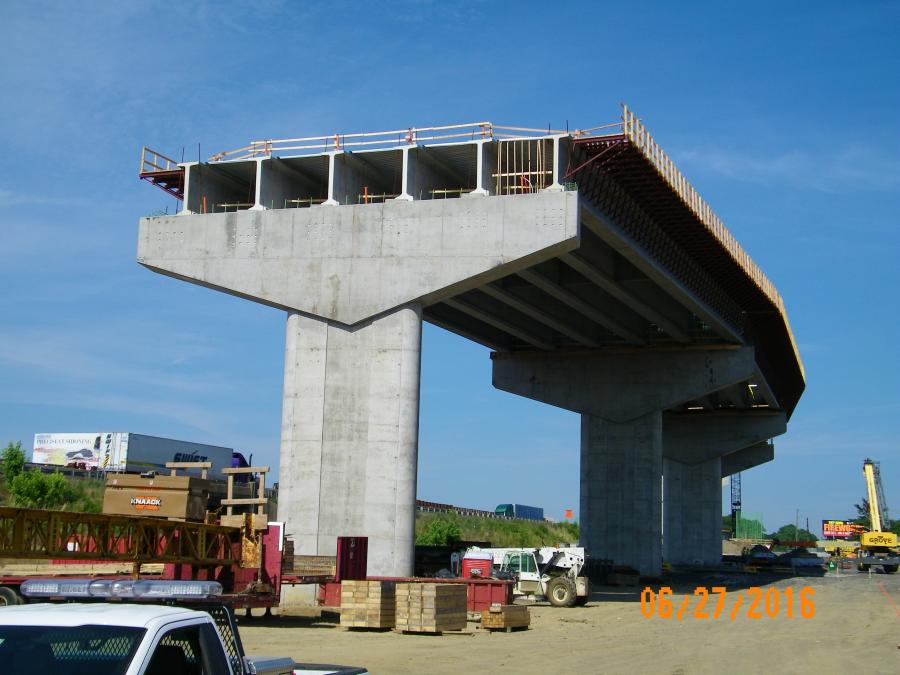 "The challenge of dealing with large volume of traffic on I-95 and the maintenance of an aged roadway surface during construction," said Raup, "and constantly monitoring the roadway surface and addressing issues as soon as noticed to avoid a more significant impact."

The major goals for the upcoming construction season are switch traffic to the next traffic stage to open the southbound collector distributor road by spring of 2017.