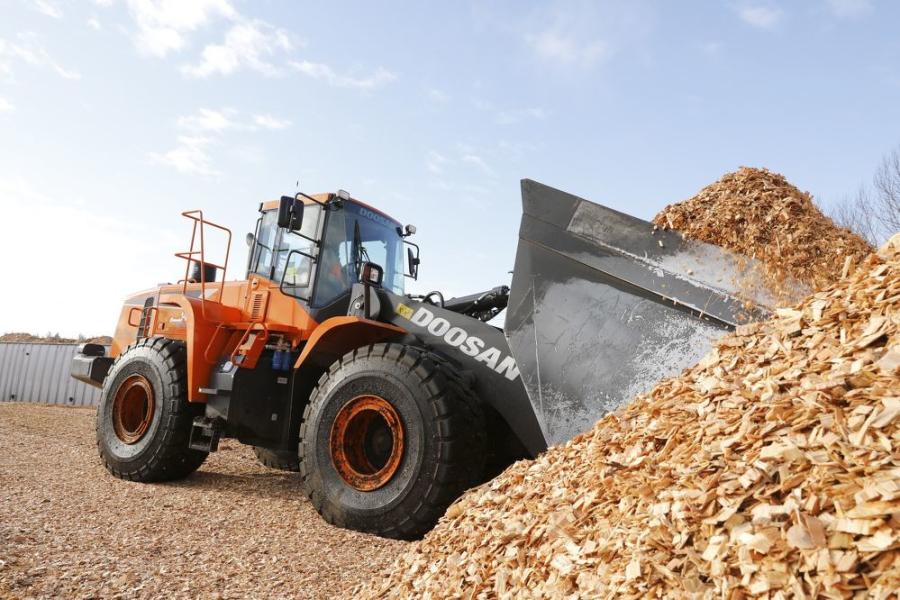 Dapaul Chip has four Doosan machines in use year-round.

For nearly 200 years, the logging industry has played a vital role in Washington. Approximately half of the state is covered in forests, with 21 million acres of forested land available, as reported by the Washington State Department of Commerce. So many trees mean local loggers — like John Glacken, owner of Dapaul Chip LLC — are staying busy.

"The logging industry has certainly changed over the years, but the amount of production our company has seen is steadily increasing," Glacken said. "On average, we are processing 50 to 60 loads of timber each day. We are one of the smaller chipping companies in the area, but we have some great customers who keep us in business."

While chipping has certainly paid off for Glacken, he had no interest in the business when he graduated from high school.

"It's funny to think how I got my start in the chipping industry," Glacken said. "I had grown up around the industry, but I wasn't interested in being a logger. But, a friend of mine called me up in 1987 and mentioned Dapaul Chip had a job opening. He said if I wasn't there the next day that I wasn't going to get the job. So, I applied and was shoveling bark the next day. I ended up really enjoying what I was doing."

A few years later, Glacken made the transition from shoveling bark to running equipment. Then, in 1996, Glacken became general manager. Eight years later, when the previous owner decided he wanted to retire, he offered the company to Glacken.

"I quickly jumped at the opportunity to buy the company," Glacken said. "I ended up loving what I did — it just felt like home to me."

Chipping Away at Uncertainty

Dapaul Chip is a full-service mill that specializes in chipping as well as sorting and loading for a variety of local customers, including Nippon Paper, Millwood Timber, Defiance Forest Products and Green Diamond Resources.

"Each of our customers harvests their own timber and then delivers the logs to us,"Glacken said. "We scale the logs, debark them, and then sort them by species, size and end use based on our customers' specifications. They decide if they want the wood to be chipped or cut to a specified length."

To keep up with the influx of businesses and customization, Glacken decided he needed to grow his heavy equipment fleet. 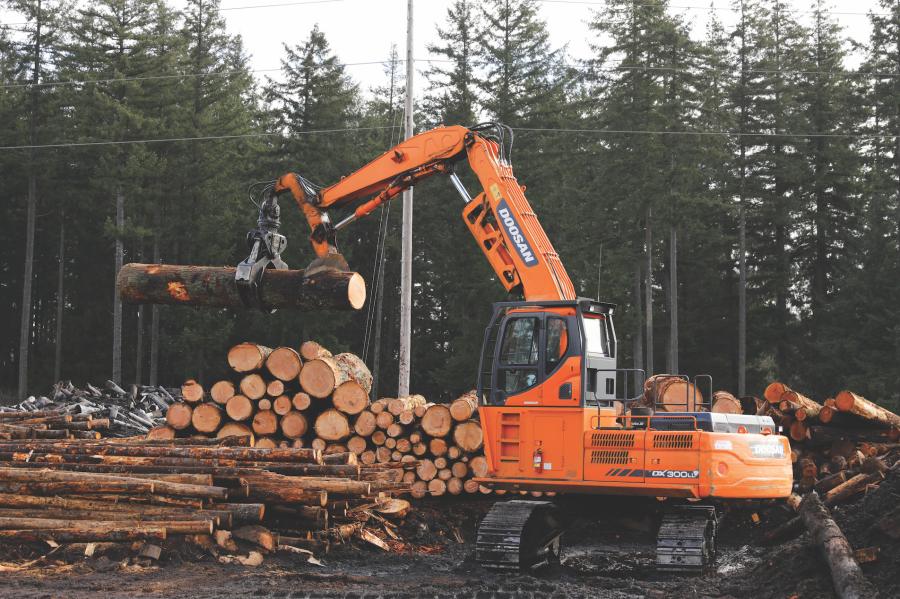 The DX300LL is put to use 10 hours a day at the Tumwater mill to sort and load logs.

"Shortly after I bought the company, a former sales specialist at Cascade Trader stopped by the mill and introduced the Doosan equipment brand to me," Glacken said. "I thought there was no way I was going to purchase a machine from a brand I had never heard of."

"Each person I called said they had good luck with the brand," Glacken said. "I trusted their opinion, so I decided to demo a DX300LL log loader and a DL400 wheel loader. Within a week, I had bought the two machines."

Doosan machines were the ideal solution for Glacken, saving him an average of three to five gallons of fuel an hour compared to his previous equipment.

"Fuel savings is huge in our line of business," Glacken said. "Basically, the fuel savings itself paid for the machines."

"The reliability, ease of use and fuel savings are like no other," Glacken said. "My crew is able to get wood processed and trucks loaded in very little time, which our customers really appreciate. Plus, the machines are easy to use and comfortable for my guys. The machines have really boosted our business."

Dapaul Chip has primarily been successful over the years; however, the company has gone through its fair share of challenges, especially when its primary mill burnt down in 2016.

"I showed up on the jobsite the morning of the fire and saw my crew standing shoulder to shoulder with tears in their eyes," Glacken said. "The entire south end of our mill was burnt to the ground. It was an unfortunate accident — luckily no one was hurt —but it was a big blow to us."

Glacken's team didn't stand around for long. Everyone got to work cleaning up and tearing the remaining mill down once the insurance company had filed its claim.

"Something as devastating as this really made me look at everything we were doing as a company and our processes," Glacken said. "It was a big learning curve, but we hung in there."

The entire rebuild took six months; however, that didn't stop Dapaul Chip from continuing to serve its customers.

"Instead of closing up shop for six months, we did what we could maintenance-wise with our Doosan machines while taking care of our customers," Glacken said. "It really shows how we came together as a company. I don't have family that works here, but the individuals who work at Dapaul Chip are my family.

"We do things together, and we look out for one another. It's not a punch in, punch out kind of place. My guys are here an hour early hanging out and drinking coffee, and most of them stay an hour later talking about what they did during the day. It's really a family."

Another individual who is just like family is Glacken's sales specialist, Jim Wark at Cascade Trader. Like other loggers, Glacken can't afford downtime and lost productivity, so he depends on his crew and his dealer for parts and service. 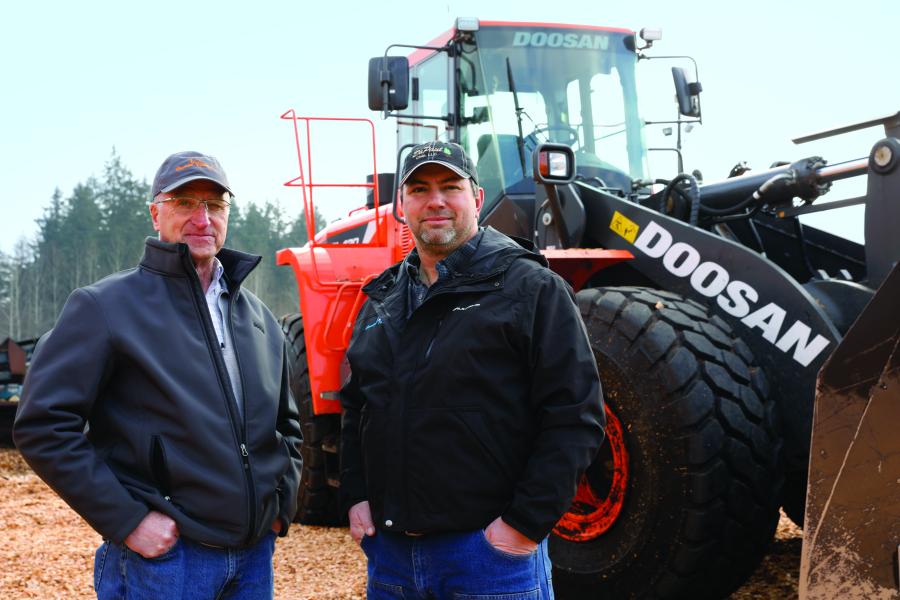 "Each operator is responsible for his own machine," Glacken said. "At the end of each day, they fuel up their machine and complete a walk-around to make sure it's in good shape. When I need parts, I call up Jim Wark at Cascade Trader. There have been times a part needed to be rebuilt, and my dealership has brought a loaner to me. They've made life easy for us."

Glacken knows that life doesn't always go according to plan. But, over the years, he has found out that even the slightest change can lead to a profitable and rewarding career.

"When I was younger, I swore I'd never be a logger," Glacken said. "I learned to really enjoy logging. It's not easy, but I can't imagine doing anything else."

Gaining a loyal customer base can be difficult for some business owners. But not for Glacken Glacken, owner of Dapaul Chip LLC. Glacken has grown his business the organic way — through word of mouth.

"I actually never marketed the business," Glacken said. "Dapaul Chip had a longstanding relationship with one customer when I bought the company, and through word of mouth, more customers came to us based on our reputation. Our ability to put our customers first and do a good job really travels fast in a community like ours. I can't imagine having better customers, who are real people, working to make a living and helping us make a living."