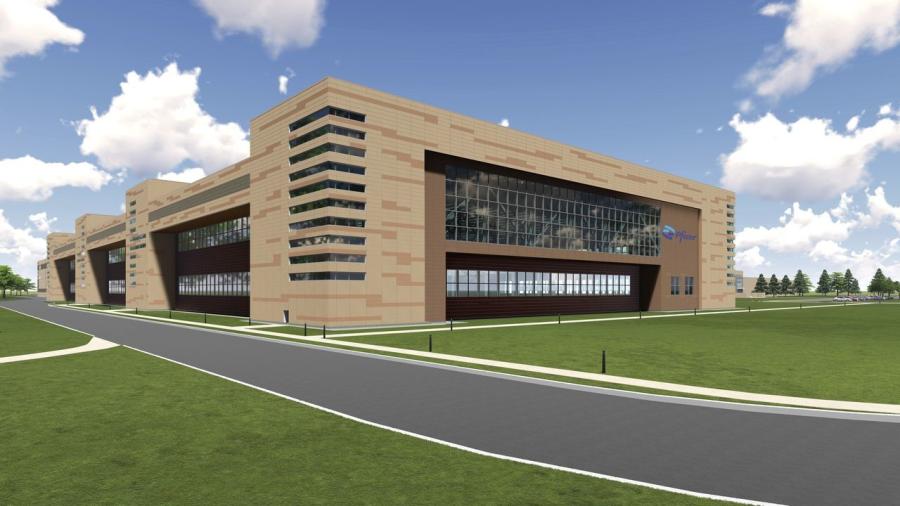 Pfizer has begun construction on its massive, $450 million pharmaceutical production campus in the western Michigan town of Portage.

Pfizer has begun construction on the latest expansion of its massive, $450 million pharmaceutical production campus in the western Michigan town of Portage.

Company officials, Michigan political and regional leaders were on hand March 31 for the groundbreaking ceremony of the new production facility — one that is expected to bring hundreds of new jobs to the region.

According to a press release from Pfizer, the new multi-story, 420,000-sq.-ft. factory will be "one of the world's most technically advanced sterile injectable pharmaceutical production facilities, known as modular aseptic processing."

Pfizer and its guests at the Portage campus celebrated both the expansion and the renewed hope that the company's COVID-19 vaccine has brought to people around the world.

According to MLive, Mike McDermott, Pfizer's president of global supply, told the small crowd gathered at the groundbreaking that the new building represents another breakthrough for science.

As many as 450 new jobs could be brought to the new Portage facility, located at the global manufacturing campus in Kalamazoo County. The site is less than 10 mi. from the city of Kalamazoo.

Construction of the building, adjacent to a 98,000-sq.-ft. warehouse near the corner of Romence and Portage roads, will begin in the coming weeks, with a completion sometime in 2023, MLive reported.

Pfizer expects the facility to be in operation in 2025, a company spokesperson said. Plans call for the new plant to initially manufacture the pain medicine known as Dynastat, which the pharmaceutical company supplies to overseas markets.

U.S. Sen. Debbie Stabenow spoke to the audience assembled at the building site, telling them that the new jobs that Pfizer will bring to the area are one reason to celebrate, along with the ongoing COVID-19 vaccination effort.

"That's a very big deal," Stabenow noted. "We are excited that Pfizer is continuing to be on the leading edge of advanced manufacturing technology, which are meeting the demands for products, and that you will help Michigan remain a leader in creating life-saving medication. Congratulations. This is about hope. It is about science. It is about the future."

McDermott added that Pfizer is lucky to be a part of the Portage area, adding that its employees have pride in where they live and work.

"We're fortunate to be in a community [and] in a state that supports our investments and has high quality colleagues that we can hire and a good pipeline out of the universities," he told MLive. "So, this has really been a wonderful place for us to do our work."

The idea of expanding the Pfizer operations in Portage has been around a few years.

In 2018, a then-$465 million facility was announced for the campus, according to MLive. The news outlet reported that Mayor Patricia Randall and others have wholeheartedly backed the effort. Projected revenue to the city over 20 years was estimated to total $26.7 million, Randall said, and the economic benefit to the larger region is estimated to total $49.2 million in six years.

Pfizer was granted a tax cut for the expansion, which she and other city leaders argued was worth it to secure the economic benefit for the region, according to MLive.

The pharmaceutical giant, which manufactures a variety of products, worked with German partner company BioNTech to create a COVID-19 vaccine that was the first to win U.S. regulatory approval in 2020. Shipments of the vaccines first left Pfizer's Portage production facility on Dec. 13. Since then, millions of doses have been distributed across both the United States and the world. CEG